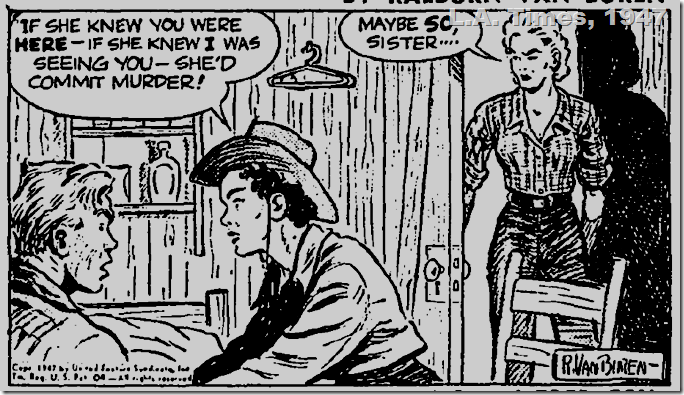 Less than three years ago the average American solider in combat was under oath to kill Japanese—but yesterday it was learned that a former combat soldier, Herbert D. Long, 32, of 540 N. Orange Drive, had virtually “adopted” one.

Cables from Tokyo quoting the Japanese newspaper Yomiuri described how the former Army man had carried out the request of a Japanese who died at Attu Island—by assuming responsibility for the future welfare of the soldier’s young daughter in Japan. 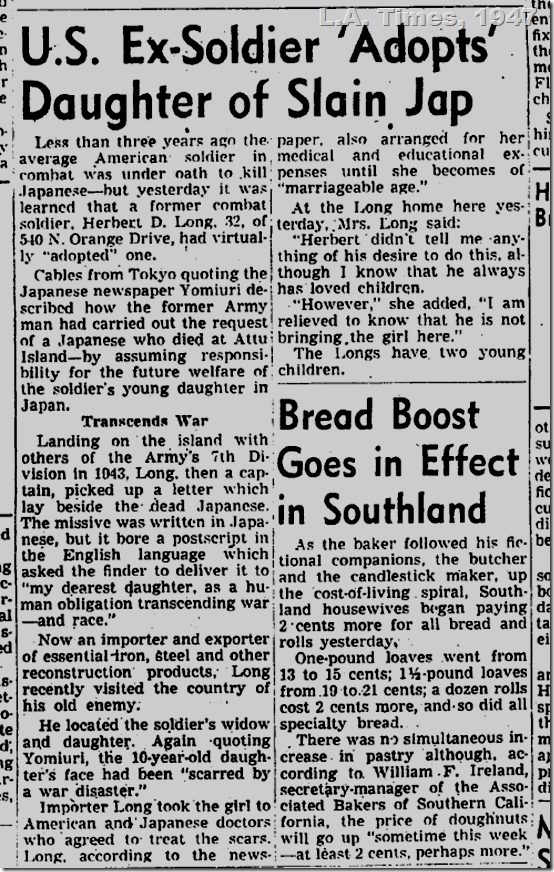 Landing on the island with others of the Army’s 7th Division in 1943, Long, then a captain, picked up a letter which lay beside the dead Japanese. The missive was written in Japanese, but it bore a postscript in the English language which asked the finder to deliver it to “my dearest daughter as a human obligation transcending war—and race.”

The story goes on to report that Long, a local importer-exporter, traveled to Japan to arrange treatment for the daughter, who was 10, because she had been “scarred by a war disaster.” Long also provided for her medical care and education until she reached “marriageable age,” The Times said.

Superficially, this seems to be a heartwarming story about veterans making peace with their wartime experiences. And maybe it is. But this is one of those occasions when research raises far more questions than it answers.

The first problem is his wife’s reaction: “Herbert didn’t tell me anything of his desire to do this, although I know that he always has loved children. However, I am relieved to know that he is not bringing the girl here.”

Then there’s the problem of his mangled name. As confirmed through the address in his mother’s 1956 obituary, he was Hubert D. Long. More troubling, a June 1943 list of dead and wounded in The Times states he was a first lieutenant, not a captain, although it does confirm that he was in the Aleutians. A 1952 story, however, lists a widely traveled Hubert D. Long as an Air Force major.

He resurfaces again in a 1968 story by Charles Hillinger. By now, Long is living at 4444 Radford Ave., in North Hollywood, where he is planning a tribute to the fallen men of Attu Island. Long told Hillinger that just before the battle, he and four friends vowed to meet again in 25 years and drink a bottle of sake. But since all four were killed in the war, Hillinger says, Long will toast their memory.

By now, rather than a short postscript, Long says the letter found next to the dead Japanese soldier was entirely in English. Worse yet, it bears no similarity to the original message as reported in 1947:
“To the American soldier who finds this. If you killed me, I charge you to do whatever you can to protect my wife and daughter in Japan. Before God, I swear if the situation were reversed, I would accept a similar charge.”

Long says he never revealed his actual identity to the Japanese family he assisted. “I could never face them and tell them it was I who killed the man they loved,” he said.

Unfortunately, there’s no accompanying picture, either of Long or his letter, which would clear up lots of questions. It’s fairly certain he was at Attu Island and was wounded there. Beyond that, it’s impossible to say. Such are the rewards of research. Unlike fiction, the historic record feels no need to tie up all the loose ends.

Quote of the day: “I didn’t know what I was doing. I hope she gets well.”
Irene Sawistowski, 16, of Chicago, who stabbed her sister to death with a pair of scissors, culminating a two-year fight over borrowing each other’s clothes.

I am retired from the Los Angeles Times
View all posts by lmharnisch →
This entry was posted in 1947, World War II and tagged #Japan, 1947, Adoptions, World War II. Bookmark the permalink.