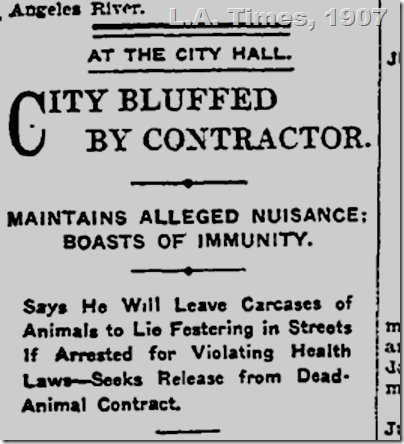 After repeated complaints to police because half a dozen dead dogs had laid in the streets for two weeks, the health department tried to charge C.T. Hanson, who held the contract for removing carcasses. But according to the city attorney, Hanson was only guilty of not abiding by his contract and nothing more.

In fact, Hanson had tried to get out his contract, claiming that he was losing money, but the city refused. “The opinion expressed at the City Hall is that Hanson has grown lax in the collection of carcasses, thinking that he may be able to force the city to more favorable terms,” The Times said.

Hanson also operated a fertilizer company plant in Boyle Heights, drawing the fury of neighbors. He apparently used the issue of not removing dead animals as a bargaining chip in deflecting attempts to close his fertilizer plant.

“I don’t blame those Boyle Heights people for kicking,” Mayor Harper said after visiting the plant. “The stench from that so-called factory is awful. I wouldn’t live on Boyle Heights to the windward of that plant if they would give me the whole hill.”

Unfortunately, no further information is available. Removal of dead animals is now handled by the Bureau of Sanitation.