Posted on September 3, 2018 by lmharnisch

“The Unfaithful” is available on DVD from Warner Archive.

The Warner Brothers have turned out a better than average murder mystery in “The Unfaithful,” but they have badly overweighted with melodramatics the things they obviously wanted to say about a pressing social problem. The new picture at the Strand stabs and jabs like a hit-and-run prizefighter at the subject of hasty divorces and the dangerous consequences to society of this ill conceived cure all for marital difficulties, but it never gets across a telling dramatic punch. However, through some uncommonly persuasive acting and skillful direction the patently artificial plot stands up surprisingly well.

Being the story of a wife who committed an indiscretion while her husband was overseas and sincerely regrets the transgression, the opportunities with the film easily could have slithered into slobbering sentimentality are many. But sure hands save the day.

I picked this movie for several reasons, but location shots are particularly interesting. I’ll try to do a separate post on them in the coming weeks. With so many familiar faces in this film, I had to go way down the cast list to get some mystery guests! 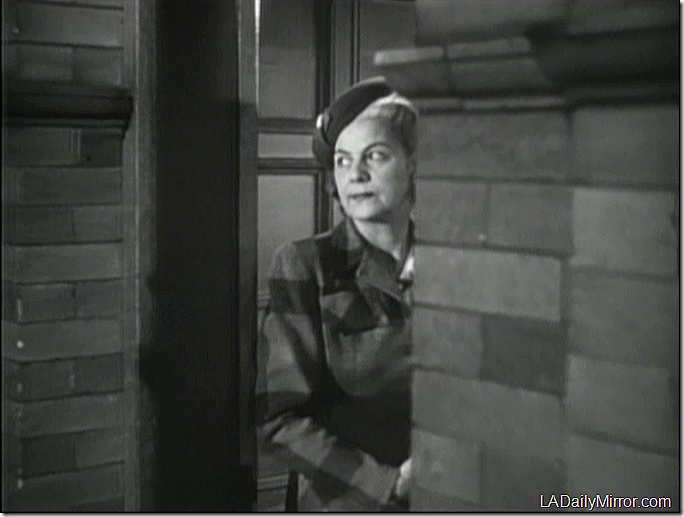 For Monday, we have a mystery woman in a mysterious downtown Los Angeles building that has appeared in other mystery movies.

Update: This is the Bradbury Building. Also, this is Lois Austin, as identified by Mary Mallory and Sylvia E, whom I neglected to credit earlier.

For Tuesday, we have an elegantly dressed mystery woman.

Update: This is Jane Harker.

For Wednesday, we have a somewhat disheveled mystery gent. He really does NOT approve of such goings-on!

Update: This is Douglas Kennedy.

For Thursday, our mystery woman buys a newspaper and boards a mystery funicular …

Update: This is Angels Flight.

… she relaxes with the other passengers …

What’s interesting is that this is a process shot, which means Warner Bros. built a set of Sinai

Oh dear. She does not approve of such goings-on in the mystery newspaper.

Update: This is Marta Mitrovich. 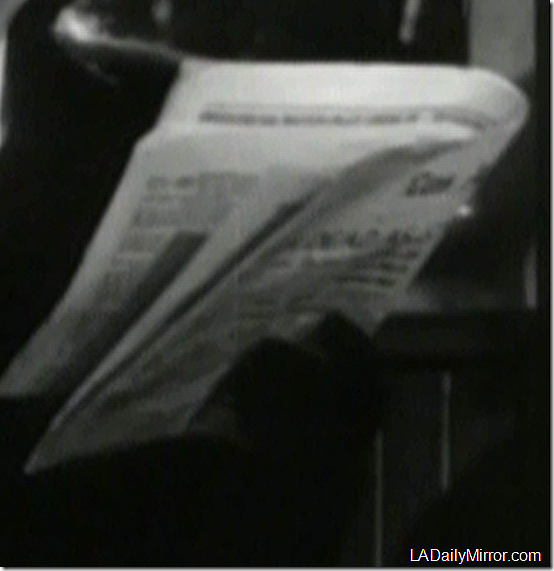 Update: This is the Los Angeles Times, although the newsboy says “Examiner.”

And for Friday, we have a bust of our leading lady (or is it?) by a mystery sculptor whose unfortunate death is driving the story.

Update: This is a bust of Ann Sheridan.