The 21st Annual Broncho Billy Silent Film Festival traveled the world in its many programs this year, featuring rare technology, recently discovered and restored films, and travelogues from near and far, something to intrigue silent film fans new and old.

The festival opened Friday, Aug. 10, with a screening saluting the dapper French comedian and auteur Max Linder, showcasing his gentle brand of slapstick comedy. A precursor to such screen funny men as Charlie Chaplin and Stan Laurel, the diminutive Frenchman, attired in tails and top hat, played a self-deprecating dandy getting into all types of mischief. As director, writer, and star, Max brought joie de vivre and romantic comedy to such films as “Max Juggler Par Amour,” “Le Soulier Trop Petite,” “Max – Victime Du Quinquina,” “Max Pintre Par Amour,” “Max and the Statue,” and “Troubles of a Grasswidower.” 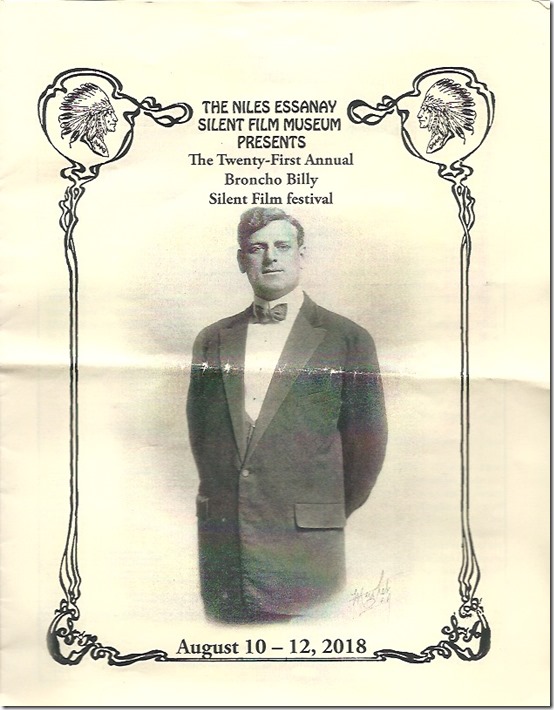 The program for the Broncho Billy Silent Film Festival.

The program concluded with his penultimate film, “Au Secours!” directed by Abel Gance, in which Max must remain in a haunted castle for one hour without crying for help. Linder bet Gance, the grand master of such epics as “J’Accuse!” and “Le Roue,” that he couldn’t make a film in three days, with this small, charming film the result. Gance devises impressive camerawork around an expressive though drawn looking Max. David Drazin provided rousing and expressive music to accompany the films.

Saturday morning, the festival offered dual programs, a walking tour of the little community or a free screening of its 2013 modern silent film “Broncho Billy and the Bandit’s Secret,” a Centennial salute to the Essanay film company’s western troupe setting up shop in Niles. The two-reeler, based on an actual Essanay story, features film camerawork shot on actual period cameras and an appearance by Diana Sera Cary, the former screen star Baby Peggy. “Windows of the Past” (2017), revealed the behind-the-scenes story in making the film.

After lunch, a program of early 3-D films screened, several of which have played at 3-D Festivals around the country like “Thrills For You,” a 1940 promotional film for the Pennsylvania Railroad, and “New Dimensions,” a 1940 World’s Fair short featuring stop motion animation of a Chrysler “building” itself. Early silent 3-D tests from 1922-1927 were fascinating, revealing inventors figuring out what makes 3-D work on screen.

Footage promoting Universal’s “The Phantom of the Opera” and “The Hunchback of Notre Dame” provided an intriguing glimpse at how a savvy studio added extra value to their upcoming blockbusters. Concluding the program were contemporary 3-D films with unique hooks. Rock musician Brian May composed a score for the 2014 short “One Night in Hell, “ a devilish story of 1860s’ Paris combining out of this world animation as a skeleton journeys to Hell. Filmmaker Robert Bloomberg created the thoughtful 2014 3-D documentary “The City Quakes,” combining footage of the tragic 1906 San Francisco earthquake and fire with more recent footage from the 1989 Loma Prieta earthquake. Judith Rosenberg accompanied the films.

That afternoon, the festival presented newly discovered Chicago Essanay short films from 1911 through 1917 in the process of restoration. Several featured short glimpses of early 20th century Chicago and pastoral areas near the city, along with appearances by Ben Turpin, Gloria Swanson, and Wallace Beery. The 1912 short “The Lemon” featured a female impersonator taking sweet revenge on a difficult theatrical producer, while “The Broken Pledge” (1915) revealed three city girls Including Swanson) falling for three city guys while on vacation. Director Charles Brabin employed expressive lighting in sunsets/sunrises and in framing shots in the odd “The Inner Brute.” Chaplin supporting actor Leo White received his chance to shine in “The Fable of the Syndicate Lover” (1915), wooing his intended’s family to ensure they approved their engagement.

Satirist George Ade conceived two films mocking values of the period that still ring true today. “The Fable of the People’s Choice Who Answered the Call of Duty and Took Seltzer” (1914) featured a rube business owner set up by a scheming political machine who take his money but fail to get him elected. Turpin and Beery make cameos as schemers receiving cash in exchange for their votes. “The Fable of the Kittenish Super-Anns and the World-Weary Sniies” revealed older adults enjoying a rich man’s entertaining jam-packed weekend while the young hipsters find themselves bored by the same activities. The program lasted much too long, featuring some films with major decomposition and providing little opportunity for a meal break, though the running time was well known, since the films had been transferred to DVD. Greg Pane provided energetic accompaniment to the somewhat lackadaiscal films. 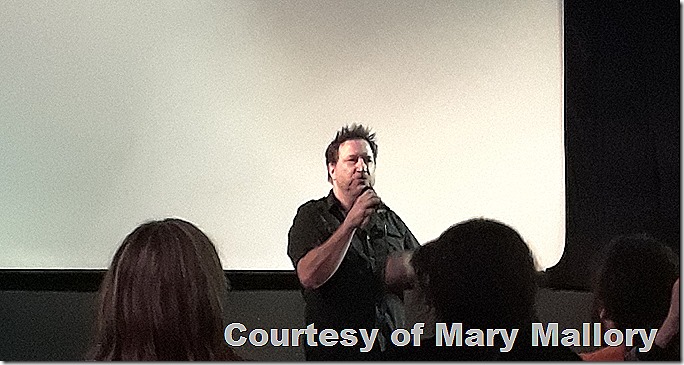 Because of the push to start on time for the “28mm Films on Parade” program, that event seemed a little rushed. The most entertaining part of the entire festival deserved much more time than it received. USC Hugh M. Hefner Moving Image Archivist Dino Everett explained the intriguing histories of 9.5mm and 28-millimeter films, before screening the motion pictures on actual vintage projectors. Recently discovered in Japan, the sweet “Our Pet” (1924, 9.5mm) featured Baby Peggy foiling a burglar with her toys before being romanced by several young suitors, who run afoul of her parents. The Kinemacolor short was unfortunately not able to be projected due to technical difficulties.

Everett presented a diverse bunch of 28-millimeter films, including a very professional 1923 film by enterprising and rich young man Crilly Butler called “Captain Sud,” a pirate story that comically winked at action adventure conventions and featured some witty titles. The 1918 Bray film “How Movies Move” demonstrated how motion picture film travels through the projector and is presented onscreen. The 1910 Pathe short trick film “The Mysterious Villa” comically captured a robber breaking into a house before it magically attacked him through stop motion animation. The early Vitagraph historical short, “He Knew Lincoln” (1914) told the story of how a small town friend of President Abraham Lincoln remembered the great man and his actions. Anita Stewart made one of her early film appearances in the short which featured Thomas Ince’s brother Ralph as the former President of the United States. A very rare 1918 Rolin short, “That’s Him” featured a young Harold Lloyd being mistakenly mixed up with robber Snub Pollard as complications ensue blocking he and his wife Bebe Daniels from boarding a train. The film shot all around downtown Los Angeles’ Court Hill in its comedy capers of chases, quick escapes, and daredeviltry. Andrew Simpson of the Library of Congress provided spirited and frisky accompaniment.

At the festival: 9.5-millimeter and 28-millimeter projectors, photo by Mary Mallory.

On Sunday morning, Larry Telles provided an entertaining look at the 100th Anniversary of Tarzan the Ape Man coming to the screen, from Elmo Lincoln the first Tarzan through many others as well as looking at other heroes of derring do in silent film action serials. Bruce Loeb gave voice to the film clips.

The program after lunch discussed film collectors and pirates, sometimes one and the same, who both saved films from disappearing while also occasionally absconding with other material. “Capturing the Wild Planet on Film” closed out the weekend, featuring intriguing steps back in time through the Miles Bros. films revealing San Francisco both just before and after the 1906 earthquake. Their “A Trip Down Market Street” occurred by happenstance when they found themselves stuck with extra unused footage when a prize fight ended early. The company decided to place a camera on a streetcar traveling down Market Street to reveal the city. After the earthquake, they returned to shoot “San Francisco Earthquake Films,” capturing both the devastating destruction of the city as well as the resilience and fortitude of its citizens.

All in all, the 21st Annual Broncho Billy Silent Film Festival provided a diverse and entertaining lineup of films offering a little something for every silent film lover.