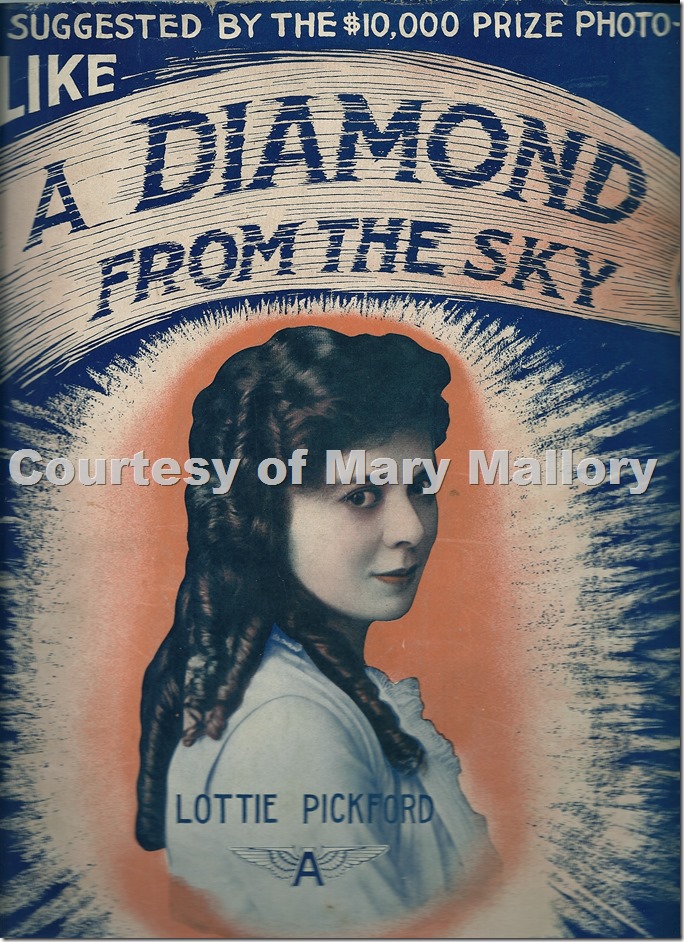 “Like a Diamond From the Sky,” by Leo Bennett and Leo Wood, courtesy of Mary Mallory.

Thanks to “What Happened to Mary?” (Edison, 1912), “The Adventures of Kathlyn” (Selig, 1913) and “The Perils of Pauline” (Eclectic/Pathé, 1914), serials skyrocketed in popularity with the American movie-going public. Production companies raced to meet the growing demand and grab their own share of box office glory.

American Film Manufacturing Co., more popularly known as the Flying A, eagerly joined the throng in 1915, hoping to top other companies with special bonuses: hiring one of the world’s best known actresses, and adding a competitive note to the series. They hoped to capitalize on the Thanhouser Co.’s innovation of offering a $10,000 prize to the winning suggestion of a sequel to its highly popular serial, “The Million Dollar Mystery.”

Like “The Adventures of Kathlyn” and “The Million Dollar Mystery” before it, “The Diamond From the Sky” existed as much as a cross-promotion with the Chicago Tribune paper as anything else. Flying A’s serial differed from the others in one important aspect: “The Diamond From The Sky” sprang to life from a scenario contest.

As Terry Ramsaye’s book “A Million and One Nights” describes, the Chicago Tribune proffered a $10,000 prize for the prize-winning serial script, which only required a concept. Over 19,000 entries were submitted, with the New York World writer Roy L. McCardell’s entry called “The Diamond From the Sky” selected as prize winner.

Santa Barbara’s American Film Manufacturing Co. received rights to produce the 30-installment serial. The ambitious studio offered Mary Pickford the leading role for either $2,000 or $4,000, per conflicting stories. Once Pickford turned them down, the company sought out her sister Lottie to star, in order to keep the Pickford name attached to the title. To keep audience interest in the serial at a fever pitch, the studio also promoted a $10,000 winning prize for the best sequel idea.

Like “The Adventures of Kathlyn” and other serials, “The Diamond From the Sky” offered a two-reel chapter each week, later serialized in the papers. In the March 27, 1915, Motography, however, studio publicists claimed it was “the first continued novel ever presented on screen,” overlooking the fact that all serials sprang to life in such fashion.

Shilling for the studio, Motography ran large feature stories on the serial over the next several months. The April 10 issue’s story seemed ripped straight from a press release, claiming, “Miss Pickford, the exact type wanted by the author, was selected after more than 25 other best known women of the screen had been considered for the part. Working opposite Miss Pickford in a dashing, young heroic role will be Irving Cummings, the “James K. Hackett” of the screen.”

In the April 24 edition of Motography, writer Terry Ramsaye interviewed S.S. Hutchinson, president of American, for a breathless feature on the serial. Hutchinson claimed Jacques Jaccard was chosen as director because, “He combines with an inborn ability extreme accuracy and artistic conscience as a scene builder. His experience and youth also added strengths.”

The studio boss also claimed that the Pickford name had no bearing on the selection of Lottie Pickford as star. “Lottie was chosen for herself alone. She is so thoroughly capable of conveying all those great, vital elements of the story which center about her. She wins sympathy and understanding as readily with a smile as with tears.”

Prominently mentioned in the story were some of the spectacular stunts featured in “The Diamond From the Sky,” several supposedly performed by Cummings himself, such as daringly flying a plane and madly driving a car to outrace a speeding train. Thanks to the risky nature of the serial’s daredevil stunts, the studio purchased a $300,000 life insurance policy on the entire cast.

American rushed to complete chapters ahead of their screening in theaters. Starting with a three-reel introduction on May 3, 1915, “The Diamond From the Sky” released two-reel chapters each week for 30 weeks, earning huge box office receipts. Reviews noted the dazzling stunts and dashing virility of Cummings, but made little mention of Pickford.

More than halfway through production, Jacquard left the serial, replaced by Irishman William Desmond Taylor. Immediately, Hutchinson dropped all mention of Jaccard, implying that Taylor’s direction led to the serial’s success. Per the June 20, 1915, New York Telegraph, “It takes a man like Taylor to make a stupendous thing like “The Diamond From the Sky” a big success,” though the serial had been one of the top box office draws since its May release.

Taylor himself played into the hype, emphasizing his use of stunts and effects. “This production was a great education. I frankly used the play as an experimental laboratory to try effects,” the director exclaimed in the September 1915 issue of Photoplay magazine.

In July, American once again aped Selig and other studios which had released serials by promoting a song written in conjunction with its film. As the July 31, 1915, Motography reported, “A new song, based on the great continued photoplay in Chapters, “The Diamond From the Sky,” is making a wide-spread hit in cafes and vaudeville circles the country over. The title of the piece is “Like a Diamond From the Sky.” Leo Bennett wrote the music and Leo Wood wrote the lyrics. It is published by the Cadillac Music Co. of New York. A striking picture of Lottie Pickford, heroine of “The Diamond From the Sky,” together with a reproduction of the famous trademark, adorns the cover.”

As “The Diamond From the Sky” neared its conclusion in movie theatres, production companies and studios clamored for the services of Taylor and Cummings. Each landed large contracts with competing studios, Taylor with Pallas/Morosco and Cummings with Mutual. Lottie Pickford, however, attracted no contract offers, remaining with American, perhaps due to her failure to mention her pregnancy at the beginning of production.

While a sequel did follow “The Diamond From the Sky,” Pickford did not appear in the uninspired production.

I am retired from the Los Angeles Times
View all posts by lmharnisch →
This entry was posted in 1915, Film, Hollywood, Hollywood Heights, Mary Mallory. Bookmark the permalink.