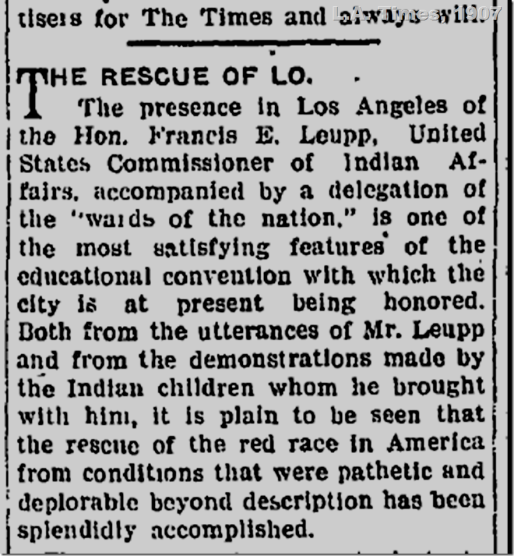 Among the features of an educational conference being held in Los Angeles is a group of Native American students brought by Francis E. Leupp, the commissioner of Indian Affairs.

A Times editorial praised Leupp, saying: “He appears to be guided by great common sense and good judgment while actuated by a sincere affection and regard for the noblest savage race that ever inhabited the Earth.”

In a speech to the conference, Leupp said Native Americans had been misunderstood on the East Coast as well as in the West. “In the East, the Indian is regarded as a perfect being who should have everything he wants while in the West the disposition has been to treat him like a dog. Neither view is just to the Indian. He surely has his faults but at the same time he is far from being the hopeless creature that many have painted him to be.”

Not that Native Americans should be coddled, as shown in the excerpt, above right. Apparently The Times endorsed some governmental “tough love” with Indian nations.

The Times praised the current treatment of Native Americans after years of brutality and neglect, saying: “As a nation, we must rejoice in what is being done for our red brethren. The disgrace of a century of dishonor bids fair to be erased as far as may be by the century of honor and justice in the dawn of which we now stand.”

I am retired from the Los Angeles Times
View all posts by lmharnisch →
This entry was posted in 1907, Education, Native Americans and tagged 1907, Francis E. Leupp, Native Americans. Bookmark the permalink.