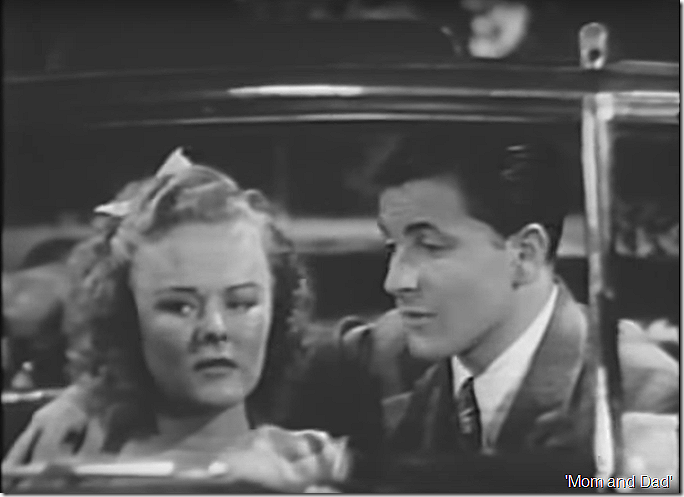 Well, we know where this story is going. 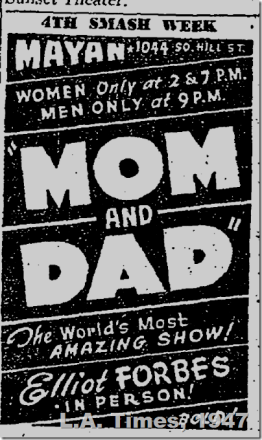 I had never heard of this particular cinematic triumph, but it was apparently a fixture of sexploitation in middle America of the 1940s and 50s. I’m deeply indebted to an essay by that luminary of le bad filme, Joe Bob Briggs. (http://www.reason.com/0311/fe.jb.kroger.shtml)

“Mom and Dad” was produced by Kroger Babb, written by Mildred Horn and directed by the incredibly long-lived and prolific William “Billy the Kid vs. Dracula” Beaudine, one of seven films he directed in 1945.

Starring nobody you’ve ever heard of unless you’re a total film geek (look for Perry White from the “Superman” TV show in a teeny role, for example) “Mom and Dad” was a movie that served as bookends for a live presentation by an actor who delivered a lecture as “Dr. Elliot Forbes.” 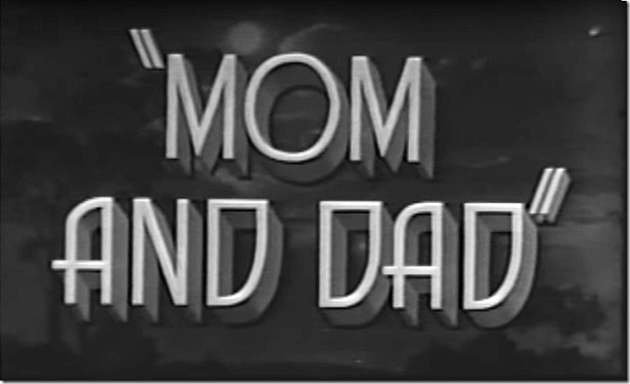 In Part I, vulnerable, impressionable young Joan Blake (June Carlson) meets a dashing young pilot (it’s hard to tell from the cast list who filled this brief but crucial role) at a dance. Before you know it, they’re in the front seat of a car in lover’s lane. Alas, young Joan soon learns between bouts of morning sickness that the dashing young pilot has bought the farm in an unfortunate incident involving an airplane. Close-up, interior, evening, dinner plate crashes to dining room floor.

A 20-minute lecture by “Dr. Forbes” followed, with sales of books titled “Man and Boy” at the men’s showings and “Woman and Girl” at the women’s screenings.
In Part II of the film, the depressed, suicidal Joan encounters former teacher Carl Blackburn, who has been fired from school for teaching sex education. Joan goes off to have her baby, but what follows depends on which print of the film is being shown—apparently there were dozens depending on the blue laws in a particular city.

Babb was a clever promoter and by December 1947, the film had grossed $2 million ($18,928,371.94 USD 2005) about what “Cinderella Man” took in on its opening weekend. He followed the success of “Mom and Dad” with similar fare, and in 1951 received the Sid Grauman Showmanship Award from the Hollywood Rotary Club. Arrested in 1953 for drunk driving, The Times noted acidly that he was the producer of the film “One Too Many.”

Babb died Jan. 29, 1980. His final production was apparently a 1977 “Roots” knockoff of “Uncle Tom’s Cabin” so obscure that even imdb.com doesn’t have anything on it.

As for “Dr. Elliot Forbes,” Times columnist Richard Buffum wrote in 1975 of a cat named after the noted sex lecturer: “I chanced to mention this remarkable feline to a distinguished doctor in Laguna who had retired as chief of staff of a well-known hospital in our state…..

The good doctor began to chuckle and forthwith confessed that he was none other than the original Dr. Elliot Forbes, sexologist, in the flesh. He explained that he had assumed this role as a means to finance his way through medical school.”

I am retired from the Los Angeles Times
View all posts by lmharnisch →
This entry was posted in 1947, Film, Hollywood and tagged 1947, Elliot Forbes, film, hollywood, Mom and Dad, theaters. Bookmark the permalink.