May 22, 1947: The London Daily Mail reported that “5,000 Negro-fathered babies were to be sent” to the U.S., according to the Pittsburgh Courier. The Daily Mail also reported that a ship was being provided to bring the children. Also untrue.

The Courier reported (May 31, 1947) that 22,000 illegitimate children were fathered by American GIs in Britain, including 550 with African American fathers.

“There are an estimated hundred or more babies fathered by Negroes, but whose births have not been recorded or reported by their British mothers, or whose case histories have been kept secret,” the Courier said.

“Complications have arisen in the cases of many Negro fathers who already have wives here and are taking no further interest in their British children,” the Courier said. “There is also an acute shortage of preferred American homes for the half-Negro babies.” 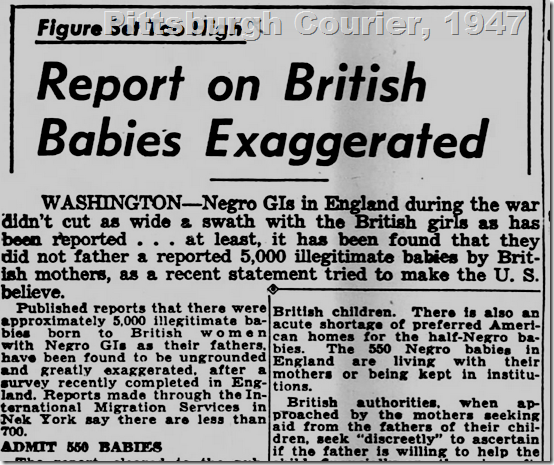