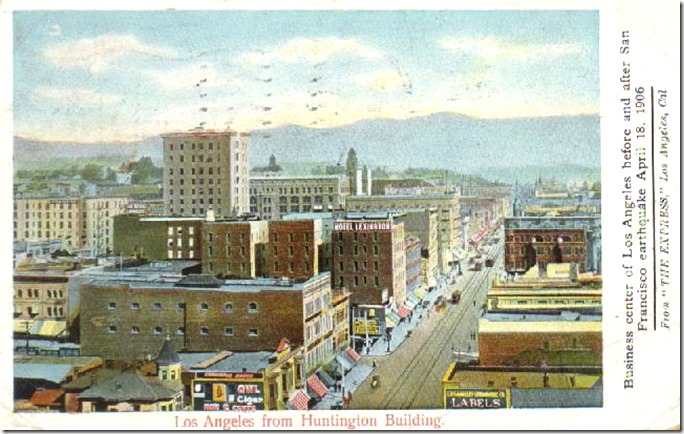 Downtown Los Angeles in 1906, contrasting it with the destruction in the San Francisco earthquake.

While romantic stories proliferate of how early independent filmmakers in the 1910s traveled to Los Angeles to escape the patents men of the Motion Picture Trust, reading early newspapers and trade journals in 1910 make it obvious that companies immigrated west looking for sunshine, climate, and abundant filmmaking locations. Be they members of the trust, or independent enterprises, staff of multiple companies freely talked to the press of their admiration for the City of the Angels.

Perhaps many of these moving picture immigrants were already familiar with the growing city. From the 1880s on, the city of Los Angeles promoted itself as “the land of sunshine,” plugging its great weather and climate to lure tourists and eventually new citizens of the growing metropolis in a variety of publications and exhibits. The Chamber of Commerce created striking color lithographic brochures, booklets, and ads distributed across the country promoting the greatness of Southern California.

Tom Zimmerman in his book “Paradise Promoted” describes several of these campaigns. In 1893, the Hollenbeck Hotel published the booklet “Vistas in Southern California,” which quoted essayist George Wharton James’ saying “the glorious combination of winter and summer beauties in immediate proximity appropriately designates the Southland as ‘Our Switzerland-Italy.” The Newman’s Directory and Guide of Los Angeles and Vicinity” pointed out in 1903 that people were simply wrong to “suppose that the climate of July must necessarily be insufferable.” The Los Angeles Chamber of Commerce itself published “Los Angeles as a Summer Resort” in 1902, stating, “It appears as if nature had selected Southern California to show what she could do at her best, in the shape of a climate that approaches so near to perfection as to leave scarcely a loophole for captious criticism.” 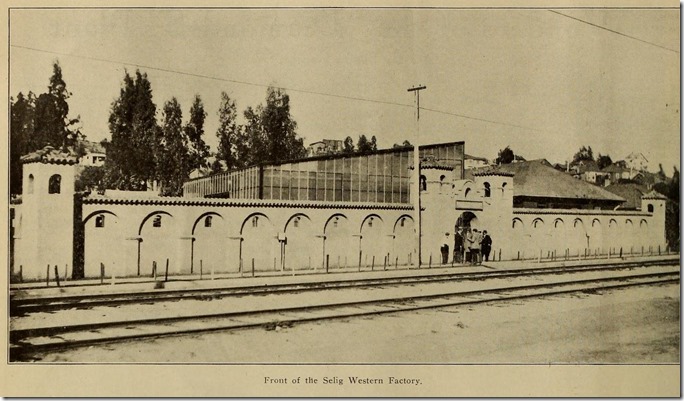 Besides shipping out literature, the Chamber under its super booster Frank Wiggins developed ingenious prefabricated exhibitions that could be delivered in pieces and reassembled at trade expositions, conventions, state fairs, and any large gathering place. The Chamber sent employees and signed boosters across the country to pass out free literature and agricultural and industrial product as they waxed poetic on the graces, beauty, and benefits of Los Angeles and Southern California.

By 1910, the moving picture industry was rapidly expanding as storefronts evolved from nickelodeons into theatres, requiring product to fill their screen time. Audiences were growing beyond immigrants and lower class patrons to young women, wives, and romantic couples looking for entertainment away from family. At the same time, Thomas J. Edison and the major manufacturers banded together to form the Motion Picture Patents Company in December 1908, regulating the sale of film stock and cameras.

As motion picture production skyrocketed, film companies in the East saw limited production time in the winter months due to shorter hours of daylight, darkness, and bad weather, making outdoor filmmaking difficult for an industry that required sunlight for production. William Selig and his company had been the first to venture west to Los Angeles for filming purposes from Chicago, shooting scenes for “The Count of Monte Cristo” in southern California. They returned in 1909, setting up production facilities behind a Chinese laundry in downtown Los Angeles. The New York Motion Picture Company followed quickly behind, setting up shop in November 1909, and at the end of January 1910, D. W. Griffith and a troupe of Biograph Company actors arrived.

Ecstatic about their newly discovered paradise, all talked freely with the press of their delight in the area’s abundant sunlight, climate, and locations. On January 3, 1909, G. M. “Broncho Billy” Anderson” spoke to the Los Angeles Times” about the Essanay Company’s recent filming in Los Angeles. “Southern California is ideal for picture making; the light is strong, clear and steady, with no clouds interposing at crucial moments. In fact, your sunlight is too strong if anything, as the glare has to be toned down a bit to prevent too sharp a contract of the shows.” 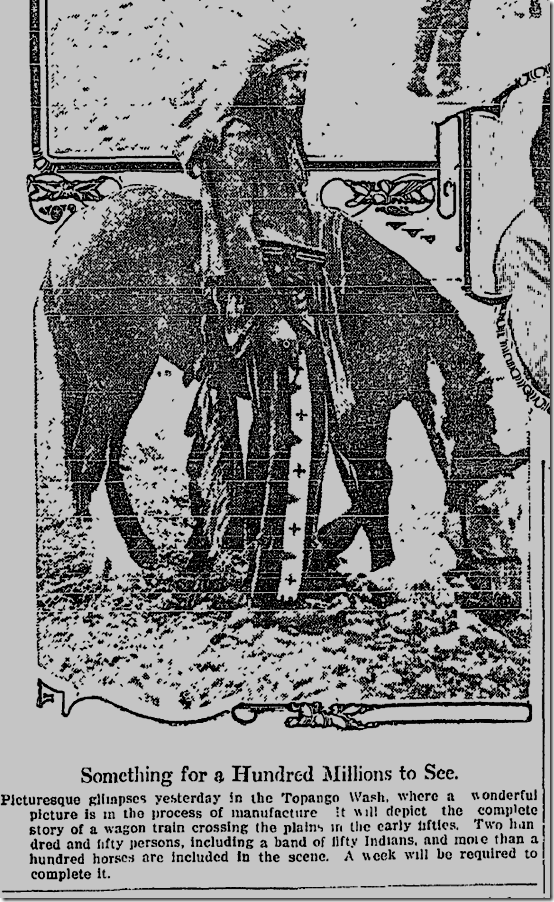 The Los Angeles Times almost two page article on February 1, 1910 was entitled, “In the Motion Picture Swim.” With subtitles “Find Us Out,” “Los Angeles Home of Three Film Concerns,” and “Climate and Scenic Settings Here are Ideal,” the unidentified reporter described, “The most of the moving pictures made in America are produced in Los Angeles. With three of the largest companies in the country here, the mountains, the valleys, the orange groves and the seashores teem with persons riding, running and posing before the motion camera, and the films are being enjoyed by audiences in nearly every city of the country and many in Europe, as they are thrown upon the screens, showing delightful California scenery.” 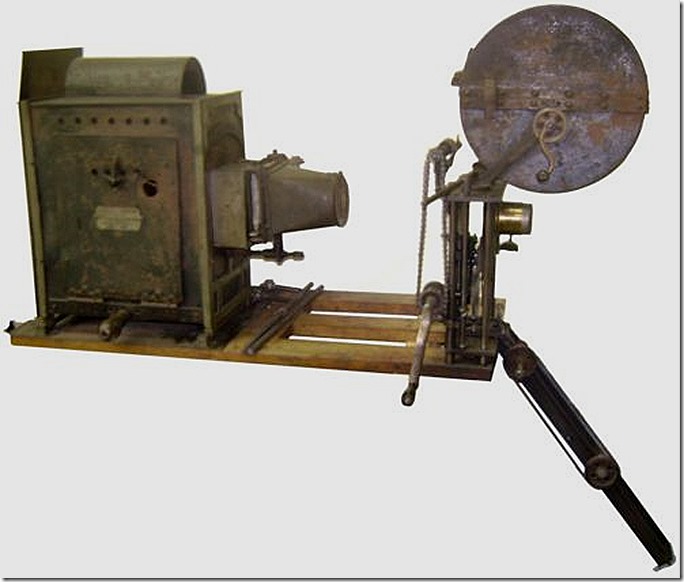 The second paragraph immediately demonstrates why the companies loved the area. “The reason Southern California has been chosen by the motion picture companies is that the background for any kind or style of picture may be found here.” It describes how virtually any type of landscape can be found in the area: mountains with snow, seashore, tropical settings, orange groves, desert. The conclusion sticks the point; “The coming to Southern California by the picture films is not a winter engagement, but will be an all-year enterprise. At first they came here to escape the snow and ice, but the bright quality of the sunshine and the number of clear days in which they may work, together with the variety of scenery, has all been found ideal… .” Even then the writer realizes the commercial importance that motion pictures will play in Southern California, how much money they generate in production costs for the area.

The writer describes each of the companies in the area, Selig, Biograph, and the New York Motion Picture Company, which was not a member of the Trust. If they were truly escaping the Patents Company, it is doubtful they would allow their name and descriptions of productions allowed in the newspaper. The article particularly mentions the Native Americans as part of the troupe, including Young Deer and Miss Redwing. 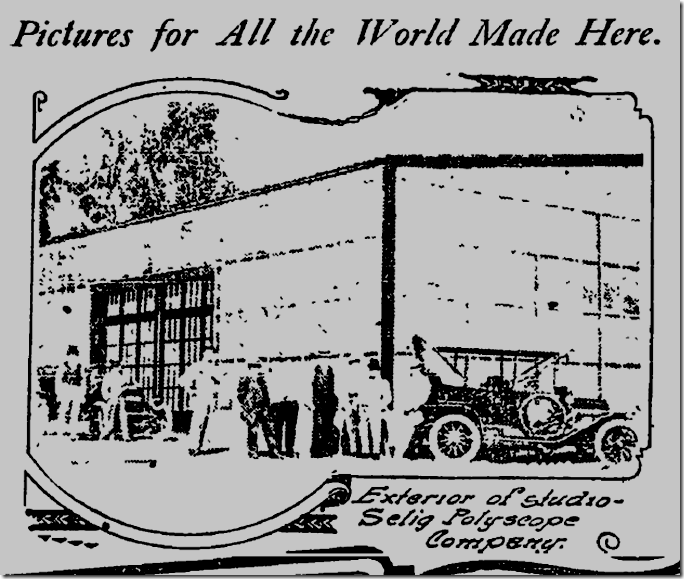 Later that year, Richard V. Spencer for the Moving Picture World pens a laudatory, almost one page article on “Los Angeles as a Producing Center,” noting that in less than two years, Los Angeles has come to rival New York as a film manufacturing center, listing as its main reason for such explosive growth “is the climate advantages of Southern California.” It states reports from the U.S. Weather Bureau which shows 164 clear days, 156 partly cloudy days in Los Angeles, perfect filming conditions. “In other words, the climate of Southern California provides 320 days for good photography, out of the 365.”

Spencer reports that “Many Eastern moving picture manufacturers have long had their eyes on Southern California as the only available locality in the United States possessing the necessary clear weather for perfect photography, nearness to market, scenery and other conditions necessary for moving picture production during the winter months.” “Every year finds Eastern winter conditions more unsatisfactory for motion picture work. Here weather conditions and climate permit work and photography the year round.”

On October 16, 1910, the Los Angeles Times again reports on the growing motion picture presence, describing how Selig is already permanently located in the city, with Biograph sending another company westward, Vitagraph visiting San Diego, and Lubin coming to Hollywood soon. “It is predicted by theatrical men that Los Angeles will be the moving-picture center of America, next year.” 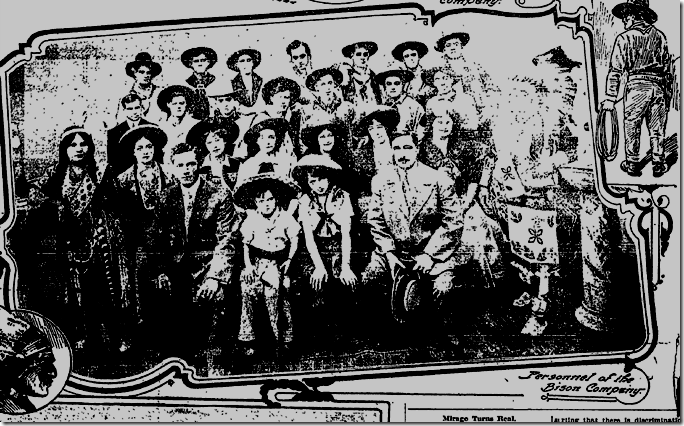 The March 12, 1911 Times spends almost three pages describing the companies filming in the area, including shots of their studios and company members, such as Balshofer and his Bison Film Company who are once again not afraid to broadcast themselves to members of the Trust. Describing the production process and how theatrical players are finding their way in to the movie business, the reporter summarizes what films will mean good and bad to the city of Los Angeles. “We must therefore begin to realize what a tremendous advertisement, this must mean to the city of Los Angeles and to the whole of Southern California as each picture taken here is exploited broadcast throughout the civilized world, showing our wooded hills, our winter surf bathing, our wonderful hotels, our flowering parks, our summer-clad citizens, our absence of poverty and our incomparable climate.”

It is not until later in spring of 1911 that the Los Angeles Times runs the first story of the Patents Company taking an independent filmmaker to court regarding the infringement of patents with the use of an unlicensed camera. Around the same time, Moving Picture World runs its first story noting the seizing of a camera for violating patents. Both of these stories appear more than a year after companies first arrived in Southern California and Los Angeles for filmmaking purposes, broadcast to the world in newspapers and magazines around the same time. Climate first attracts filmmakers, and then much later the Patents Company decides to arbitrarily and haphazardly search for Los Angeles-based filmmakers for evading licensing.

Within the next decade, filmmaking would shift its headquarters to Los Angeles and Hollywood from Fort Lee, New Jersey and New York City, a mecca for film production just as much as early pioneers looking to make a fresh start in the west. Los Angeles, “the Land of Opportunity,” continues to offer scenic variety and terrific weather for filmmakers year round.