A matchbook from the Wilshire Bowl, listed on EBay as Buy It Now for $9.95.

Within just a few years of sound motion pictures becoming the approved film format, silent films became a virtual pariah in popular culture. They were pulled from shelves, destroyed by studios who failed to foresee new technologies, satirized in mass market entertainment as old fashioned and out of place, and even made the brunt of jokes by studios who added laugh tracks and sound effects to prints.

Once important or popular stars found themselves lucky to still be employed. Some found nice supporting roles on stage, radio, and the screen, while many were relegated to bit parts or even just extras standing in the corner of scenes, trying to make crumbs in order to survive.

Multi-talented designer/director John Murray Anderson decided to salute silent films and their makers in 1941, giving them the respect and dignity they deserved. Renowned for his elaborate stage shows for “The Greenwich Village Follies,” “Ziegfeld Follies,” Radio City Music Hall, Billy Rose’s “Jumbo,” “Aquacade,” and the larger than life Universal film “King of Jazz,” Anderson realized that the history of movies provided opportunities for great costuming, pageantry, and staging.

In February as part of his job conceiving and directing new shows for Rose’s Diamond Horseshoe nightclub in New York City, Anderson created the “Silver Screen” as tribute to the silent film industry. He designed acts around grand themes over the decades, and brought in such luminaries as Carlyle Blackwell, Mae Murray, and Nita Naldi to appear in the show. 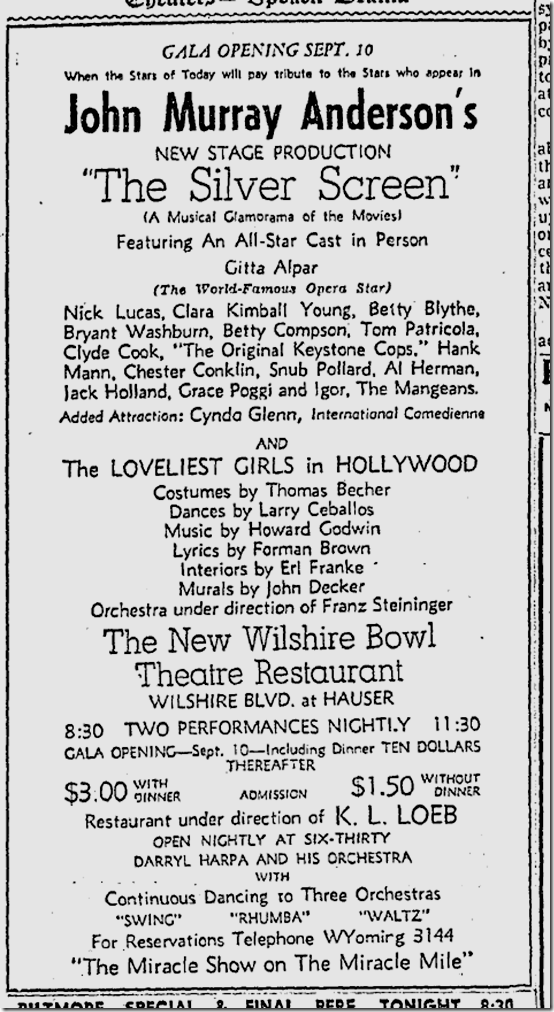 Anderson realized he could do much more with the production in Hollywood, the perfect place to host such a presentation as America’s film capital. In July the director leased the Wilshire Bowl at 5665 Wilshire Blvd. and spent approximately $25,000 to update it into a grand Gay ‘90s’ palace somewhat replicating the Diamond Horseshoe as Hollywood home of the “Silver Screen Revue.” Anderson designed the elaborate interiors himself, what the September 10, 1941 Los Angeles Times called “gold and white opera boxes…draped in scarlet satin, the montage bar decorated with movie caricatures and other new effects which carry out a color scheme of gold, white, scarlet, and blue.” Lifelike replicas of stars sat in boxes. Renowned painter/caricaturist John Decker drew the elaborate murals and caricatures himself.

Ed Franke helped Anderson with interior design, Thomas Becher created costumes, Larry Ceballos choreographed dance numbers, composers Forman Brown and Howard Godwin wrote original songs, all to enhance the Hollywood cavalcade nature of the program. A September 2, 1941 Variety ad called “The Silver Screen Revue” “A Musical Glamorama of the Movies of Yesterday, To-Day and To-Morrow.” The presentation would cover the years 1906 to 1940, built around the themes Birth of Gamour, Sex, Beauty, and Sound.

Anderson polled 350 theatre owners and exhibitors regarding the three female movie stars who had given the most joy to audiences, with Greta Garbo, Joan Crawford, and Marion Davies winning out. He stated he would build skits saluting their careers, and decided to focus Davies’ act around “When Knighthood Was in Flower.”

Keeping with the theme, director Anderson hired such silent film stars as Bryant Washburn, Clara Kimball Young, Betty Compson, Betty Blythe, Clyde Cook, and Keystone Kops Chester Conklin, Hank Mann, and Snub Pollard in mid-August to lovingly salute the silent screen world. Within a week, they were all fighting for billing, hoping to headline the show one last time.

Trades noted that producers Carl Laemmle Jr. and Anderson spent $45,000 out of their own pockets and hoped to appeal to the movie industry and the tourist trade, those looking to nostalgically catch up with their favorite veteran performers.

The August 26 edition of Variety reported that Anderson had designed a “filmacade” of Cecil B. DeMille films for an extravagant numbers, covering such films as “The Squaw Man,” “The Ten Commandments,” “Male and Female,” “Joan the Woman,” “Madam Satan,” “The Crusades,” “Cleopatra,” and “Reap the Wild Wind.”

The September 6 Billboard stated that per the American Guild of Vaudeville Artists performers rehearsed for four weeks, earning $60 per week.

Several delays forced “Silver Screen Revue” to open two hours late. Washburn served as emcee, supported by Miss Young. Blythe recited “A Fool There Was” with elaborate gestures and backup by three male dancers. Conklin, Mann, and Pollard drove onstage in a Kop car before performing some slapstick and throwing pies at each other. A bevy of young women wore masks resembling the faces of Garbo, Crawford, Davies, Gloria Swanson, Mary Pickford, and Norma Shearer as they danced and performed small skits honoring their film careers. 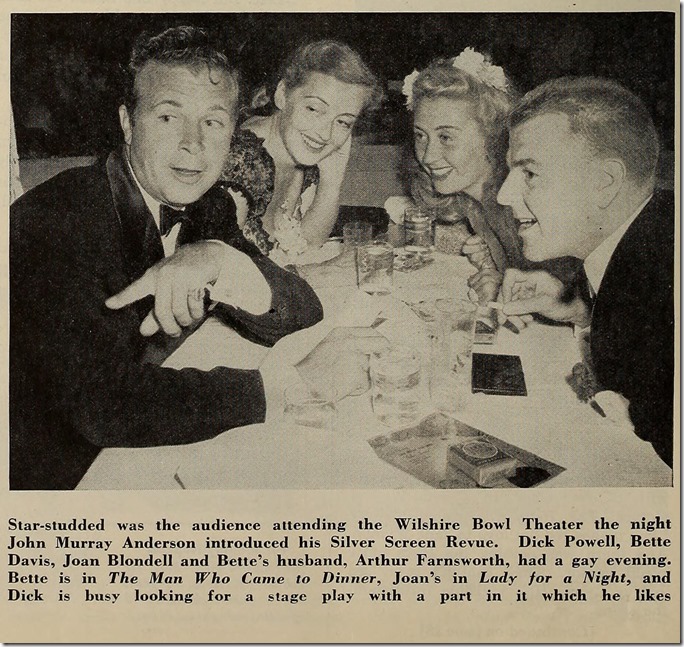 Variety found Washburn and Young just OK, and claimed they, Blythe, and the Kops received applause for their efforts, while “looker” Betty Compson stole the show with a professional “Merry Widow Waltz” with Jack Holland. They claimed that those indulging in nostalgia loved it, while”moderns who know little and care less about the old timers” found in bland, expecting more of Anderson.

Columnist Hedda Hopper noted Anderson’s respect and dignified portrayal of Hollywood. “To most of us old movies are just funny, but to Anderson they are significant of the patience, courage, and imagination of the pioneers who made pictures possible.” The director wanted audiences to remember the art and industry these stars and innovators created.

Louella Parsons praised her old friends. She called Washburn more handsome than his Essanay daays and wrote that the ovation for Clara Kimball Young brought “tears to the eyes.” She called Blythe “graceful” and described Compson as not looking a day over 21.

Stories went out over the wire about the Silver Screen Revue, with the September 24, 1941 Knickbocker News calling it “…a cavalcade of sirens, slapstick and censorship, or bathing beauties, Keystone Kops and glamour girls. It’s a show designed for the tourist trade, but is being patronized by today’s flicker folks.” Many found it appropriate that a full show was dedicated to the silent screen and movies in general, as other presentations sprinkled a skit or two about the industry in their shows.

Within a couple of weeks, Anderson’s “Silver Screen Revue” was bleeding money. Too far away from the main drag of Hollywood, the show suffered from lagging attendance by young people looking for the hip new thing and from entertainment industry performers afraid they could end up as museum exhibits saluting history. The show closed for a couple of days, with some stories claiming it was because of observance of the Jewish High Holidays.

By October 1, the American Guild of Vaudeville Artists, Local 47 of the Musicians’ Union, wardrobe, and stagehands were looking to ensure they would be paid, filing suit against Anderson and the other producers and appearing in Judge Ben Harrison’s Federal Court.

The show closed on October 6, and Silver Screen Revue Productions Inc. filed for bankruptcy, listing assets of approximately $34,730 and debts of $36,375. $18,000 had been spent renovating the facility and $16,000 for costumes, sets, insurance, and the like.

Anderson considered creating a small touring show for the road consisting of Washburn, Blythe, and Compson, but only Compson ended up in New York at the Diamond Horseshoe dancing the “Merry Widow Waltz.” She replaced Mae Murray who had sued the producers.

The smaller “Silver Screen” show continued at the Diamond Horseshoe until the spring of 1942, when Rose decided to freshen things up with a totally new presentation.

After Silver Screen Revue” folded, Slapsy Maxie’s opened in the same location for several years before it too bit the dust.

While visionary John Murray Anderson envisioned an elaborate show highlighting the glories and spectacle of the silent film industry, audiences were not yet ready to embrace the artistry and talent of the early days. Not until the 1960s would the silent movie industry start to see a resurgence in presentations honoring both the films and stars of the early days who helped create the gigantic motion picture and entertainment industries that exist to this day.