Aggie Underwood and Women City Editors on the Frontiers of Journalism

Posted on November 6, 2015 by lmharnisch

Underwood’s autobiography, “Newspaperwoman,” written with Foster Goss. It is full of colorful stories, but like all autobiographies it should be taken with a grain of salt.

It’s probably a good time to bring a little clarity to the Aggie Underwood narrative before it spirals too far out of control.

It is often said (erroneously) that Underwood (d. 1984) was the first woman city editor of a major U.S. newspaper. It’s even in her obituary. 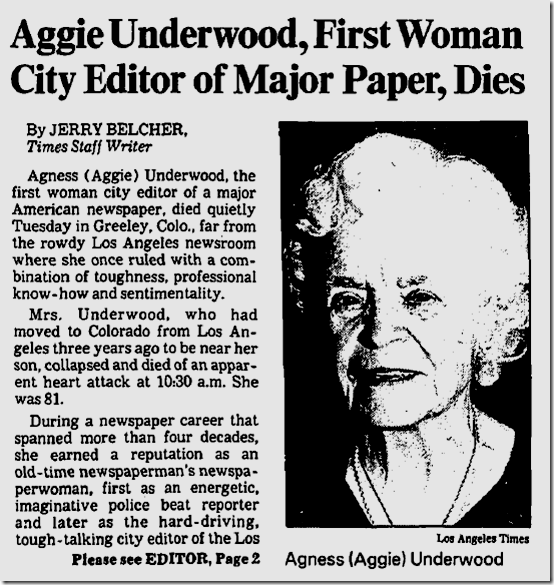 Without diminishing Underwood’s achievements, she had several predecessors in the role of city editor who deserve a bit of attention, for they truly were pioneers.

Reporter Julian Blanshard said: “Gotham is being introduced to the first woman ever to hold down the city editor’s desk in a large metropolitan newspaper.” (Niagara Falls Gazette, June 24, 1930).

The first is Laura Vitray, who became city editor of the New York Evening Graphic in 1930.

A Columbia School of Journalism graduate, Vitray was apparently the first woman copy editor at a New York paper.

“I love the copy desk. It is the closest thing to a gambling game I know. It requires the gambling spirit to take a story that is handed to you and choose that part of it which is to be displayed in a headline that will attract the readers. And, moreover, to write good heads, you must have a sense of rhythm that has an affinity to poetry — which I do not write.”

I love this story: “the artichoke king …. the torch killer…” It really was another era.

Even in Los Angeles, Underwood was not the first woman city editor. She was preceded in that role by Mary Holland Kinkaid (d. 1948), who was city editor of the Los Angeles Herald.

Correction (Aug. 20 2018): An earlier version of this post misspelled Kinkaid’s name as Kincaid. 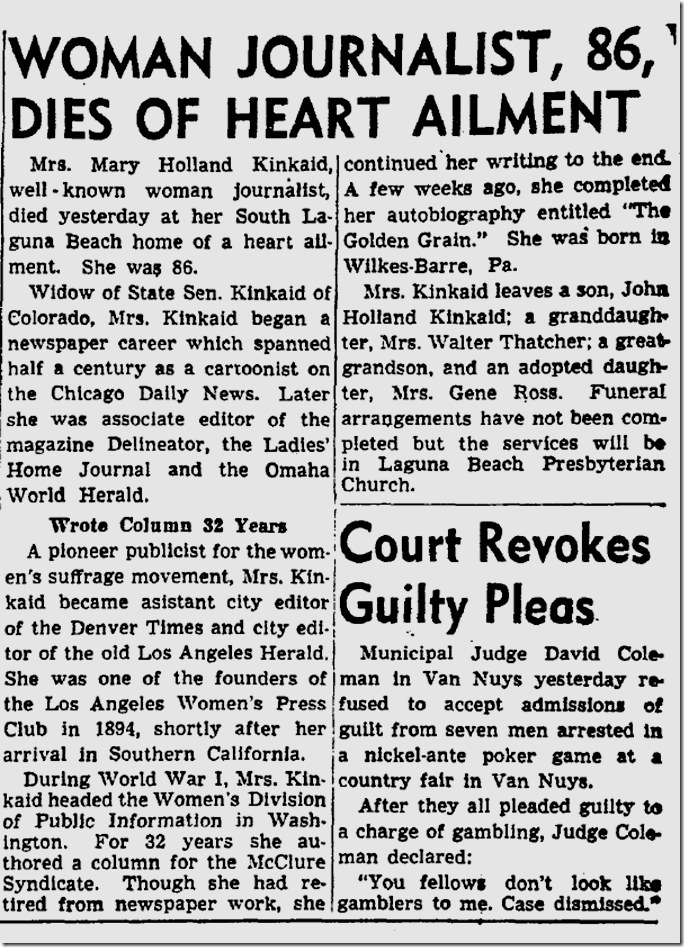 To be sure, Aggie Underwood is a legend in local journalism – but one must be careful in writing biographies of legends.

I am retired from the Los Angeles Times
View all posts by lmharnisch →
This entry was posted in History and tagged #women's history, Aggie Underwood, Laura Vitray, Mary Holland Kinkaid, Newspapers. Bookmark the permalink.