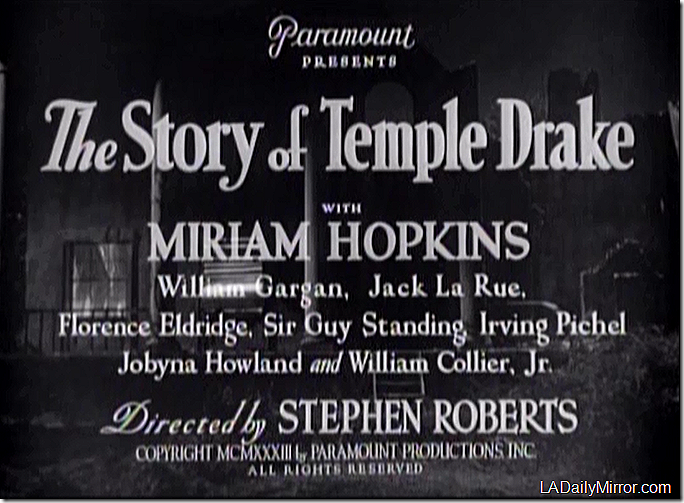 It was directed by Stephen Roberts, with a screenplay by Oliver H.P. Garrett from a novel (“Sanctuary”) by William Faulkner. It was photographed by Karl Struss. The film also featured Elizabeth Patterson, James Eagles, Harlan E. Knight, James Mason, Louise Beavers and Arthur Belasco.

“Better than anticipated …. A gruesome, sordid tale … but it has a certain strength.” The New York Times

Gary Martin said: Also in 1959 at the Coconut Grove Playhouse in Miami, I had the pleasure of designing the set for Look Homeward Angel starring Miriam Hopkins. I had been warned that she would be “a bitch” but after I had a stairway changed to her needs …and in record time …I became her pet. One day she gave me a tub of gardenias …of two that she had picked at the beach. It was then I discovered that I am allergic to gardenias. A very nice lady. Is this she or am I just getting old and sentimental?

Howard Mandelbaum said: I saw “Temple Drake” at the Museum of Modern Art. The screening kicked off a big Paramount retrospective. Miriam Hopkins spoke afterward. She apologized for the movie, which was totally unnecessary. There are stories of her jumping the line in the ladies room that night, announcing, “I’ve suffered more than you have.”

And here’s why I picked the movie:

A restored print of the movie was shown at the 2010 TCM Classic Film Festival, but has not been generally released. I happened to record it during my DVR binge last year.

Update: This is Henry Hall.

And for Tuesday, we have a mysterious gent.

Update: This is James Eagles.

And for Wednesday, we have a mystery woman.

Update: This is Florence Eldridge. 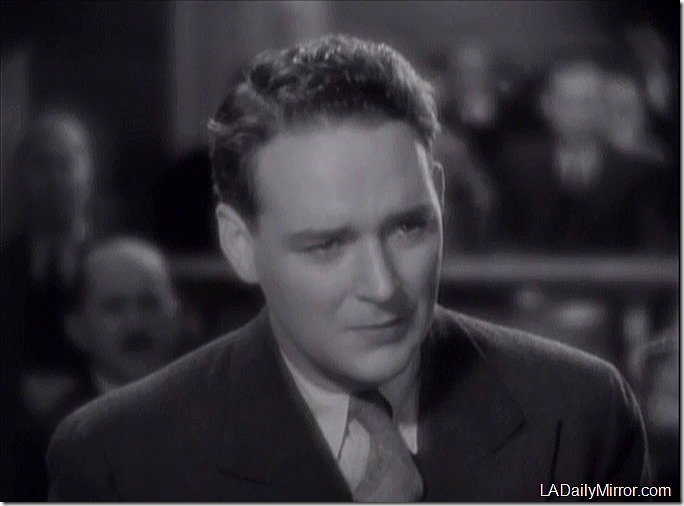 And for Thursday, we have a mystery gent. I was originally going to use another image from this scene, but that one, alas, turns up in Google image search.

Update: This is William Gargan. 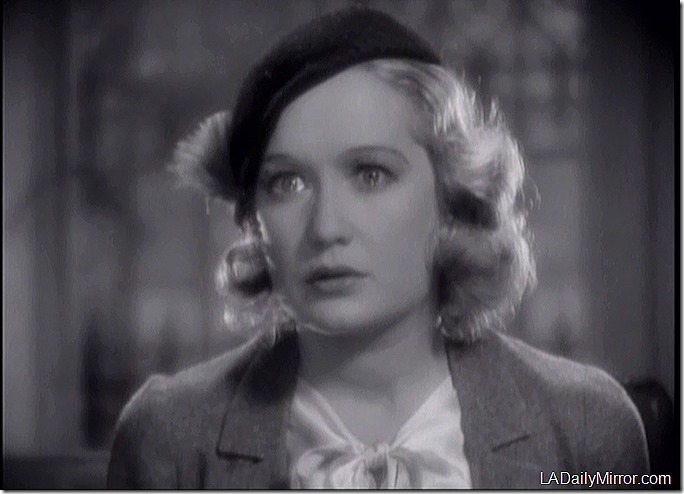 And for Friday, we have Pia Zadora in “The Lonely Lady.”

Update: And this is Miriam Hopkins.

I am retired from the Los Angeles Times
View all posts by lmharnisch →
This entry was posted in Film, Hollywood, Mystery Photo and tagged film, Hollywood. mystery photo. Bookmark the permalink.