Since Ray Bradbury died in 2012, I have been rummaging around the Daily Mirror archives in a frustrating search for a copy of his libretto for an opera titled “Leviathan ’99,” which I obtained many years ago when I was working for the Arizona Daily Star in Tucson and covering the Arizona Opera Company.

I finally found it (while looking for something else, of course) and thought I would write a brief post about it.

I don’t recall the precise circumstances under which I was able to make a photocopy of the libretto. It might have been loaned to me by the late Glynn Ross, who was then head of the opera company. Notice that in the attached cover letter to Ross, Bradbury refers to living in Tucson. It’s also possible that I borrowed the libretto  — just long enough to make a photocopy — from a composer friend who was in informal discussions with Ross about writing the music. As I recall, I don’t believe my friend ever wrote a note of music for a production.

The script runs 100 pages and was bound like a movie script, and the format is much like a screenplay. A copy is apparently in the Center for Ray Bradbury Studies at Indiana University. 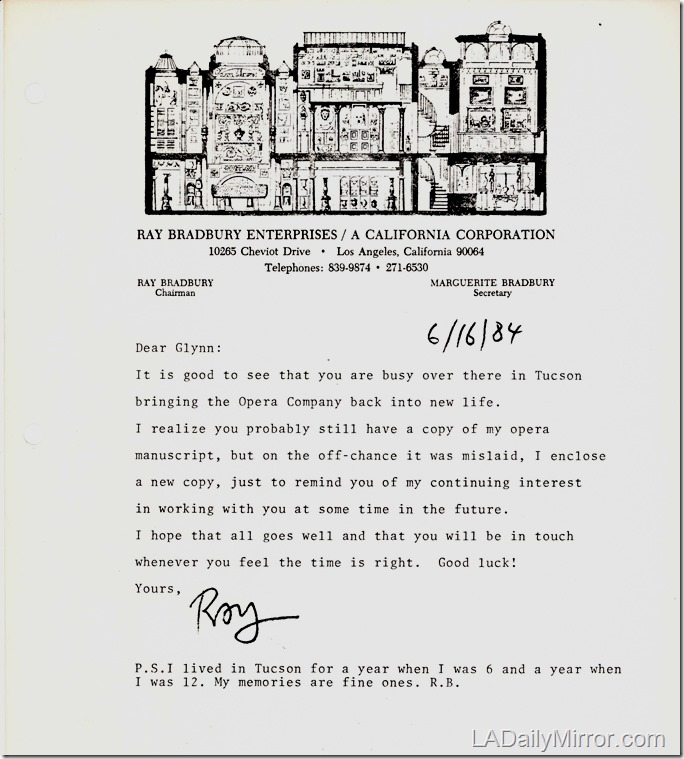 As far as I can determine, “Leviathan ’99” never became an opera. Apparently it was done as a radio drama in 2009.