For decades, Hollywood typed actors for their looks, personality, temperament, a shorthand telling audiences what they could expect whenever the actor appeared. Some personalities like Clark Gable, Marilyn Monroe, Humphrey Bogart, Joan Crawford, and Cary Grant rocketed to fame through their megawatt looks and charm, deep talent, or fierce drive. Others like Franklin Pangborn, Ned Sparks, Edna May Oliver, and Thelma Ritter provided tart flavor to films as prominent character actors, adding zesty spark, comic interludes, or high energy with their strong characterizations.

Gaunt, imploring Nigel de Brulier, a live version of an El Greco painting, added a note of mysticism or fanaticism to silent films with his impassioned clerics or wild-eyed madmen. His characters often seemed to inhabit their own spiritual worlds. Tall, lean, gaunt and possessing piercing eyes, de Brulier endured ill health and work struggles as a young man, bringing realistic fervor and devotion to his roles.

Corrections: This post changes the year De Brulier declared an interest in U.S. citizenship from 1909 to 1899 and notes that he was in the second screen version of “Ramona,” the first being made in 1910.

“The Misfortunes of Nigel,” Picturegoer June 1924, via Archive.org.

De Brulier cloaked his background in mystery, seeming to rise unbidden from an exotic past. In fact, the actor remade himself into a more cosmopolitan personality once settled in America, completely transforming his actual past. Born Francis George Packer August 8, 1877 in Bristol, Gloucestershire, England, middle child Francis helped support his family by working as a servant to the Tanner family around the age of 13, before receiving recognition for a wonderful singing voice.

The January 6, 1924 Los Angeles Times reported that de Brulier’s rare and exquisite tenor voice first attracted notice in the church choir of a small hamlet in provincial England.” After receiving musical and voice training, the young man performed on operatic stages in London, Paris, and the continent. Overuse led to de Brulier losing his voice. While trying to regain it, he incurred health problems, with doctors suggesting an ocean voyage, bringing him to North America.

From there, history grows a little hazy. The paper claimed that he landed in a small railroad town in New England, working as a baggage master, track walker, and freight clerk before drifting across the country, ending up in Death Valley, working in a Borax mine.

United States Records and newspaper accounts provide a different story. Immigration records show that young Packer immigrated to Detroit from Windsor, Canada, April 25, 1898. On January 20, 1899, in Chicago, de Brulier declared interest in becoming a United States citizen. Somehow he ended up in Arizona in 1904. The April 20, 1904, Arizona Sentinel printed a district court petition by Francis George Packer and his wife, Natalie, asking to legally change their names to Francis Nigel de Brullier and Natalie de Brullier, because his wife was the only surviving descendant of an “ancient, aristocratic French family.” They hoped to keep the name and heritage alive. Petition granted, de Brulier and his wife ended up in Los Angeles in 1907, where the City Directory lists them living at 422 E. 29th St., and de Brulier working as a solicitor. 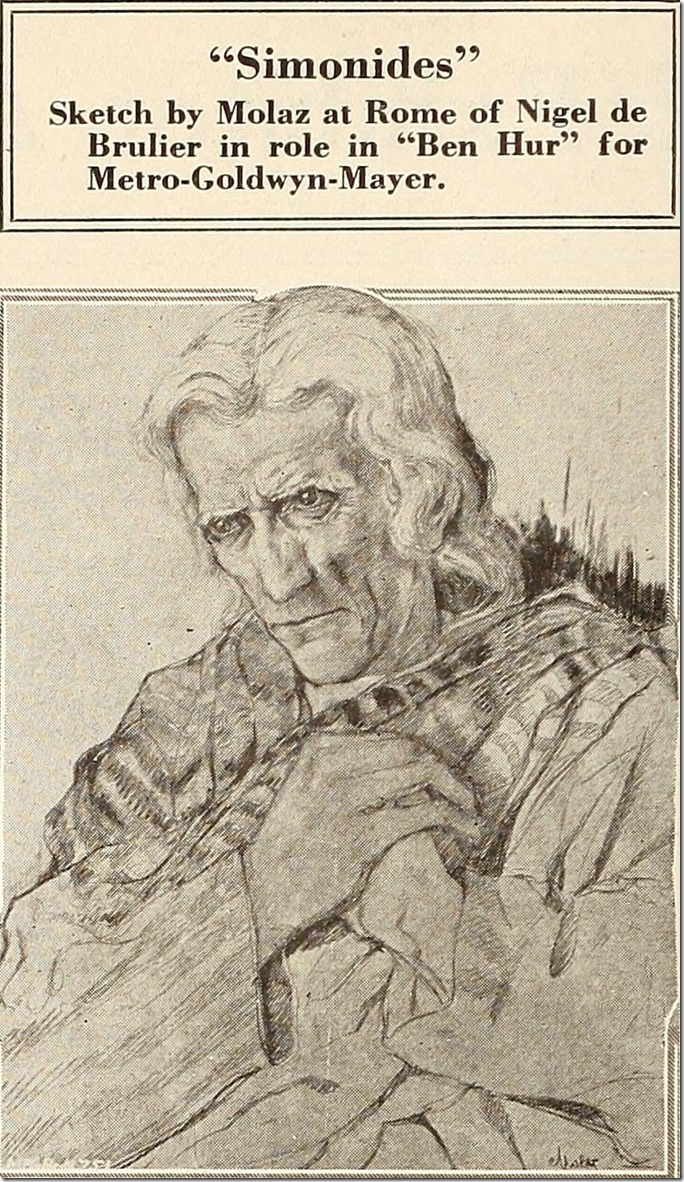 A sketch of de Brulier in Exhibitors Trade Review, via Archive.org.

The mysterious de Brulier continued singing, even performing in San Francisco that year. The October 27, 1907 San Francisco Call reveals he appeared in the comic opera, “The Mocking Bird,” at the Princess Theatre, singing second baritone. By November 1, he sang in “The Madcap Princess,” based on “When Knighthood Was In Flower.”

Over the next several years, de Brulier sang all over Los Angeles in many capacities. The January 15, 1908 Los Angeles Herald lists him as a principal of the Manhattan Opera Company, starring in “The Campaigners” at the Auditorium, along with other future silent film actors as Lillian Leighton and Wayland Trask, and 16 chorus girls. During December, de Brulier sang bass in the first Los Angeles production of Camille St. Saens’ “Christmas Oratorio,” per the December 15, 1908 Herald. He had continued performing in San Francisco as well, starring in a production of “A Country Girl” with Oscar Apfel in March.

Determined to gain United States citizenship, de Brulier applied for naturalization on January 15, 1909, gaining official recognition on March 21. In these papers, he recounted his journey from Canada into America.

De Brulier continued working as a singer, performing as a soloist in “The Voyage of Columbus” for the Ellis Club on January 27, 1909. On June 13, 1909, he sang with a male octet at a campaign gathering for Los Angeles County Assessor Hopkins, performing two solos as well. Two weeks later, he sang in a quartet for a Knights of Pythias funeral. In June 1910, he performed with the King’s Daughters ensemble at Bethany Church. As he sang, he moved around the city of Los Angeles as well, living at 10434 Hyrum in 1910, 3514 E. Fourth in 1911-1912, and 1544 Hillandale in San Pedro from 1913-1914.

Somehow the saucer-eyed actor began appearing in films in 1914, appearing as a poet in the 1914 Hobart Bosworth film, “The Pursuit of the Phantom.” American Motion Picture Company signed him to a deal in 1915 as a member of their stock company in trade ads. While at the studio, he starred in the film, “Purity” with Audrey Munson” in 1916, with the actress gaining fame for her nude poses in front of the screen as well as off-camera for artists and sculptors. He appeared in “Twilight” with Mary Miles Minter that year, as well as the second screen adaptation of “Ramona.” Julian Johnson described his and other character performers in the Photoplay magazine article, “The Shadow Star,” stating, “As a type of the younger actors who are not stars and will not be, but whose painstaking delineations are the underlying substance of the profession, I might mention Nigel de Brulier, a young Californian with a grave liking for character – and a knack for it, too.”

Nigel de Brulier in “The Four Horsemen of the Apocalypse,” from the Washington Herald.

The young man received mostly excellent reviews for his work. The 1918 Exhibitors Herald described de Brulier’s work in the film “Kultur” as a “conspicuous character bit for which he deserves special credit.” The June 7, 1919 Moving Picture World noted he was perfectly cast in the film, “Sahara,” “With the face of a dreamer and idealist, de Brulier is admirably fitted for the character of Mustapha, the Hindu philosopher.”

Over the next several years, de Brulier performed in several strong classic films, employing his sensitive, vulnerable character and imploring eyes in such films as “The Romance of Tarzan” (1918), “Four Horsemen of the Apocalypse,” (1921), “The Three Musketeers,” (1921), “Foolish Wives,” (1922), “Salome,” (1922), and “The Hunchback of Notre Dame,” (1923). He received strong reviews for his short but often memorable roles as priests, soothsayers, and visionaries, with the August 22, 1922, Exhibitors’ Herald calling him, “a famous character actor.” His piercing eyes focused audience’s attention on his soulful presence. As the June 1924 Pictures and Picturegoer stated in the article, “The Misfortunes of Nigel,” “It appears that because he looks so ascetic and has such an impressive personality, de Brulier is always cast for a Churchman of sorts.”

In 1924, de Brulier sailed to Europe for the filming of “Ben Hur,” traveling the continent afterwards visiting Italy, France, Spain, Switzerland, Belgium, Holland, Portugal, Sweden, and Great Britain. Upon returning to the United States, he joined the Los Angeles’ chapter of the Adventurer’s Club, serving as second vice president in 1926.

His hollowed cheeks and gaunt look added to his strong portrayals, often mentioned in reviews. The December 16, 1928, Los Angeles Times review of “Noah’s Ark” describes his “inscrutable physiognomy,” and his “prominent nose and cheekbones, hollowed eyes that glow with fanaticism,” make the role “the most picturesque of his career.”

De Brulier continued acting in sound films, while appearing on stage and screen as well. He acted in “The Merchant of Venice” with the great Jewish actor Maurice Moscovitch at the Hollywood Music Box Theatre in early 1931, and appeared in “The Gift of the Goddess” radio dramatization in 1934.

While his name is often forgotten by film fans, Nigel de Brulier’s ascetic, striking appearance resembling that of a religious disciple and his intense acting stand out in many great silent films, adding a touch of righteous fervor and dedication that are long remembered after the story ends.