James Ellroy and the Remake of ‘Laura’: Doomed From the Start 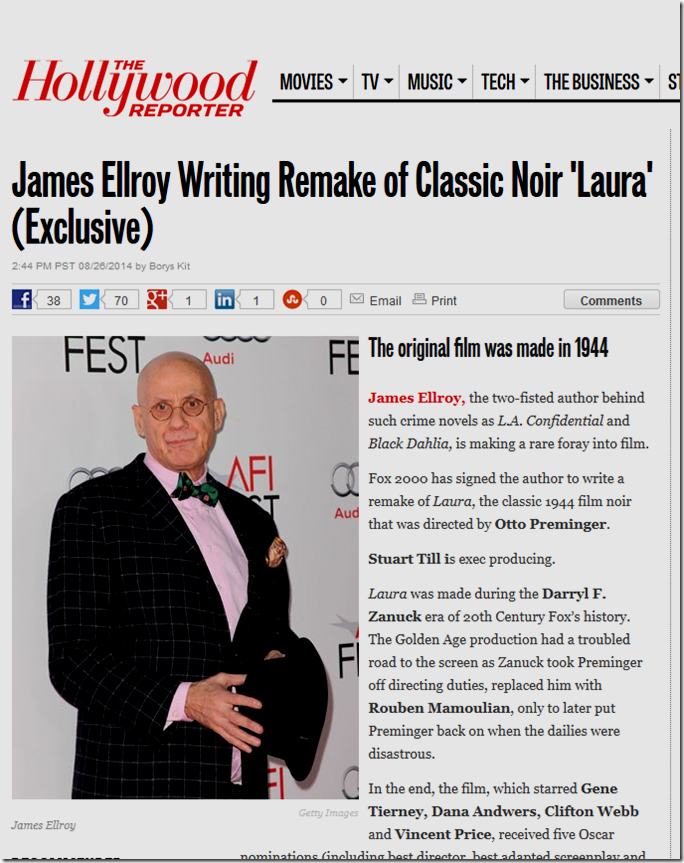 Imagine my surprise yesterday when the Hollywood Reporter announced that my onetime friend James Ellroy would be doing a remake of “Laura,” the subject of a meandering series of posts over the last few weeks. Perhaps my little project has taken on a bit of relevance.

Let me say first of all: I don’t harbor any ill will against James. He’s a nice fellow (though rather egotistical and eccentric to say the least) who eventually tires of all his friends and silently moves on without an explanation. And to anyone who currently considers themselves one of James’ friends I can only say “prepare yourself for him to vanish someday without a word. That’s how he is with everybody.”

As for the remake of “Laura,” in all honesty I can’t imagine how James can pull it off, for several reasons:

“Laura” is a New York story as much as “The Naked City” is a New York story. Novelist Vera Caspary lived in Los Angeles while writing for the movies, but disliked it, as she writes in her autobiography, “The Secrets of Grown-Ups,”  and she intentionally set the book in New York, with specific locations.

All the main characters are dyed-in-the wool New Yorkers, especially Waldo Lydecker (played by Clifton Webb in the film), the newspaper columnist and radio pundit who is the most important person in the story.  The title may be “Laura,” but without Waldo, the story is nothing. Recall that Laura Hunt (played by Gene Tierney in the film), the presumed murder victim, has come to New York to seek her fortune.

James, on the other hand, is renowned as a Los Angeles writer who specializes in L.A. of the 1940s and ‘50s. New York of the 1940s is alien territory to him and I cannot imagine that there is any way to uproot “Laura” from New York, replant it in Los Angeles and have it survive.

In addition, “Laura” is a sophisticated, subtle story about a homicide detective’s growing obsession with a murder victim.

And if there are two words that do not describe James Ellroy’s writing, his characters or his plots, they are “sophisticated” and “subtle.”

James writes with a lot of fake 1950s jive talk, slang and profanity about Hollywood lowlifes and people beating the tar out of each other. Can you really imagine Dana Andrews saying: “Give it up, sh*tbird” to Vincent Price in “Laura” or narrating “I pulled up to Laura Hunt’s f*ckpad?”

Going back to the novel as the source for the screenplay is going to be extremely difficult, for all the reasons I am outlining in my series on “Laura.” Adapting the book for the film took teams of writers and even then there were portions of the script and the film that were cut from the final release. Adapting the existing script would solve those problems, but might yield nothing more than the original story obscured with a layer of Ellroy’s jive.

Back when we were good friends, James used to sneer at writing movie scripts: “It’s the easiest money you’ll ever make,” he said, because a writer will collect a good salary for a screenplay that never gets made.

And that may be all that happens with “Laura.”

Then again, judging by the release of “Gangster Squad,” maybe young, modern audiences are satisfied with nothing more than people in old clothes firing machine guns and beating the tar out of one another.  With vintage music on the soundtrack.

I’ll go out on a limb and say that Ellroy’s “Laura” script will never be made; or if it is, the movie will be an incoherent mess.

6 Responses to James Ellroy and the Remake of ‘Laura’: Doomed From the Start