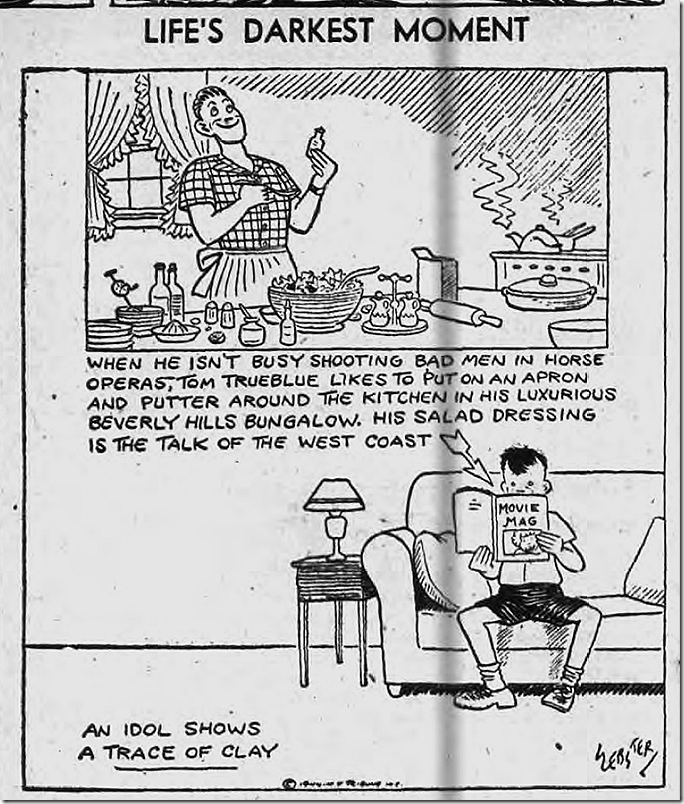 Danton Walker writes: High on a hilltop in Beverly Hills at the end of the Tower Road, a tortuous lane overlooking Benedict Canyon, is a hobgoblin castle straight out of a Walt Disney film; an edifice of scrambled architecture, so rambling and complex that it would take a full day to explore it, if one had the heart to do so. It is the home of the late John Barrymore, on which the Great Profile spent close onto a million dollars; unoccupied since his death and unoccupiable except by someone who does not object to living with a frozen nightmare.

Louella Parsons says: “Citizen Tom Paine” was bought by Frank Tuttle a long time ago, but he left his option lapse and it goes to Walter Wanger. Walter has bought it from the author, Howard Fast, and plans to make a story of the Revolution with all the famous characters.

But he will not go into Paine’s religious beliefs nor his tendency toward atheism. Rather, will he make a real saga of the Revolutionary period with four principal characters, Washington, Jefferson, Franklin and Paine. Well-known actors will be chosen to play these four men. We haven’t had a good story of the American Revolution in a long time and Walter plans to spend a considerable amount in making an authentic story.

LEO: The sort of day on which your talents should shine. Clean up odd little tasks, pay bills, make plans for future events. Study standard problems. Aim at completion.

From the Philadelphia Inquirer via Fultonhistory.org.

I am retired from the Los Angeles Times
View all posts by lmharnisch →
This entry was posted in 1944, Columnists, Comics, Film, Hollywood, Horoscope and tagged 1944, comics, film, hollywood, horoscope, Louella Parsons. Bookmark the permalink.