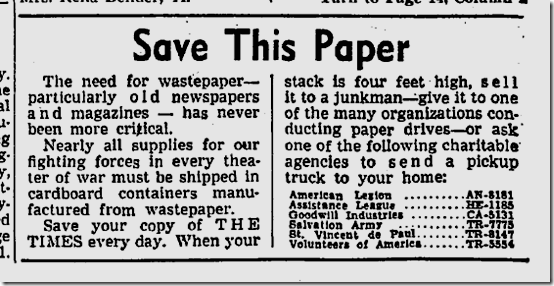 The Times encourages readers to save copies of the paper for reuse in the war effort. Let’s hear it for recycling!

Keith Hallock gets a kiss from Warner Bros.’ Joyce Reynolds for being the first to volunteer for a job  making tires at one of the plants in Los Angeles.

Discussions are underway to avoid a streetcar strike over higher wages.

And no. It would be unconstitutional to keep Japanese Americans from returning to the West Coast after the war is over, says Atty. Gen. Francis Biddle.