Since the beginning of time, people have joined clubs in order to socialize with like-minded individuals and enjoy shared activities. Many original clubs revolved around religion, politics, colleges and fraternal organizations like the Masons, Optimists, Elks and the like. Professions organized their own clubs; actors in New York formed the Lambs’ Club as a way to honor their own and practice the art of acting.

In the teens and early 1920s, many people formed social groups in Los Angeles around similar lines. Besides fraternal organizations, social groups like the Uplifters, Breakfast Club, Jonathan Club and California Club were formed to honor spiritual as well as financial aims. The entertainment industry organized its own social groups like the 233 Club, 400 Club, Embassy Club and others in which to socialize outside of work. Many of these gradually dissolved due to financial, personal and organizational problems.

In 1925, a small band of actors passed around the idea of organizing groups of entertainment veterans to support each other and practice their profession. In the book, “The Masquers Golden Anniversary: 1925-1975,” a Robert Edeson letter to Wilfred Lucas dated May 7, 1925, notes that a group of eight met the week before and felt that there should be group like the Lambs’ Club in New York to honor the acting profession in Los Angeles. Per the Hollywood News of June 30, 1931, this small band of men – Fred Esmelton, Edeson, John Sainpolis, George E. Read, Ned Sparks, Robert Schable, Alphonse Ethier, and Warner Baxter – met May 12, 1925, at Ethier’s house and decided to form an acting club “of love, loyalty and laughter,” which Edeson boiled down to the motto, “We Laugh to Win.” They would celebrate birthdays and important occasions, as well as hold wakes to remember their own.

Originally incorporated under the name “the Jesters,” on May 18, 1925, the group invited people to join through referrals by members. In order to prevent some of the problems that destroyed other groups, they decided that members must be invited, the organization would be professionally managed, members must pay dues and the like.

As their rule book states, “The purpose of the club is to promote sociability, friendship amongst its members, to arrange and conduct social meetings, and in keeping with the goodwill, that they are assured that the Masquers-Jesterate is always on the lookout to see that any breach of friendship should never enter into their club rooms.” The clubhouse would therefore be a home away from home for members, a place of comfort and support.

On June 22, 1925, the group met to choose an official name. Actor Earle Foxe suggested the name, the Masquers, a name employed by several acting organizations at universities and communities around the country, which the group approved.

The Masquers with Franklin Pangborn in costume, from an issue of American Cinematographer.

Buying their first ad in the September 25, 1925 Variety, the group announced they would throw a Revel Oct. 17, 1925, at Hollywood High School’s Memorial Auditorium to raise money to build a Little Theatre in Hollywood. Chairman Earle Foxe would organize festivities.

The group soon faced their first test of principles and loyalty when the Los Angeles Board of Education asked them to remove Roscoe Arbuckle from participating in the show only a couple of days before the event, after protests to Dr. William Snyder, Hollywood High School’s principal, from parents seeing a 24-sheet billboard promoting Arbuckle’s appearance in the Revel. The board “adopted a resolution rescinding the permit for the use of the auditorium unless a written agreement was made that Arbuckle would be eliminated from he program, per the Oct. 21, 1925, Variety. Enraged at such a proposal, Edeson stated they would not remove Arbuckle from the show under any circumstances and canceled the appearance.

Moving the performance to Philharmonic Auditorium, the group performed Oct. 22, 1925, patterning their show somewhat after the Lamb’s Club Gambol and roasting Hollywood, receiving great notices in Variety and the newspapers. Variety gave a rave review to the show and wrote up the event, with a ticket price of $5.50. Arbuckle played a naïve new member from Beverly Hills in the opening number, “At Our Club,” showing the group singing and joking. Two minutes of applause rang out when Arbuckle first appeared and played his small role. Bert Roach led the gang in singing the club song, “We Laugh to Win,” composed by Victor Schertzinger. The western satire, “When Men Were Men,” featured J. Farrell McDonald, William Walling and Tom Mix in a creamy white costume with diamond-studded belt with his horse, Tony.

The skit “Fidos,” the hit of the night, featured Mulhall, Gaston Glass, Leslie Fenton, William Austin, and others “disporting themselves in stately feminine attire as they plied the leash in none too gentle terms over the carcasses of their “fidos” (actors, crew, etc.)., Warner Baxter, Charley Chase, Woody Van Dyke, Huntley Gordon, and others. The drama highlight, “The Chinamen’s Chance,” showcased Montagu Love, Feton and Bert Lytell in a staged one-act play. The musical ensemble, “The Gypsy Maid,” starred Julian Eltinge as the title character, wooed by Baxter, along with other performers like Walter Pidgeon. Lew Coy performed “Guess Who I Am,” a synopsis of his screen career.

In 1927, KNX broadcast live excerpts from the 1927 Revel, extending word of the Masquers to the public.

Many of these early Revels were made available to the public and featured up and coming performers at major theaters. Jack Benny and Bert Wheeler acted as Masters of Ceremonies at the 1929 Revel, with Rudy Vallee and his band performing at the glorious Warner Bros. Theatre on Hollywood Blvd, arranged by member Jack L. Warner.

In early 1928, William Mong discovered a new house suitable for a permanent group home at 1765 Sycamore Ave., just below the Rollin B. Lane mansion. In order to move quickly, Antonio Moreno purchased the property on behalf of the group, with the organization arranging to buy it from him through loans, donations and subscriptions. Harlequin Milton Sills organized the committee to purchase it from him with $20,000 loans from members, $10,000 in membership fees, and a $35,000 mortgage. Ground was broken Feb. 7, 1928, per Variety, on renovation of the house, including a 510-seat dining room convertible into an auditorium, lounges, club area and other special features. The clubhouse would welcome everyone, as long as they were men, and become a place to party, enjoy performances, live, play games like crap and high stakes bridge and drink. Don Barclay caricatures dotted the walls of the dining room, and Henry Clive artwork enlivened facilities.

Camaraderie was tested in 1929 when angry disputes arose throughout the entertainment community regarding whether Equity or the Academy of Motion Picture Arts and Sciences would represent actors in contract talks. Many likened it to the White Rat days of the late 1910s, as producers attempted to destroy acting representation and unionization. In order to preserve harmony, the club banned all mention of politics inside. 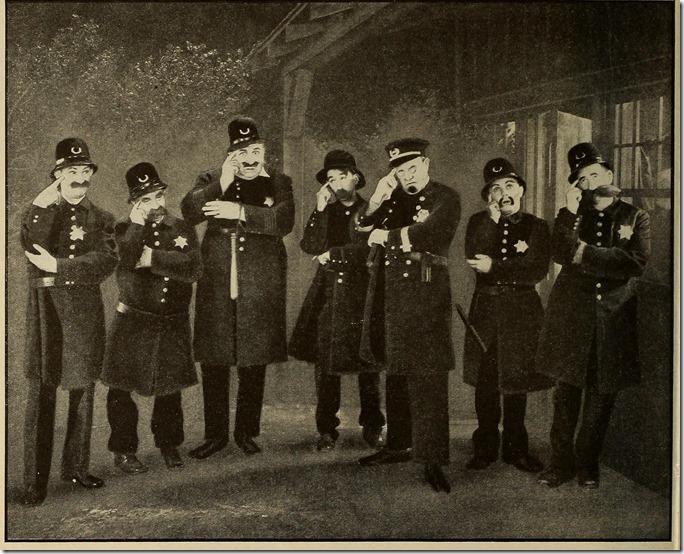 In 1929, the group also sold license plate frames to raise money. One big innovation arrived later that year: the group opened the clubhouse to women from 2 p.m. to 5 p.m. on Sundays, allowing them in as guests of their spouses, boyfriends, or siblings. The Masquers allowed no female members until the 1970s.

To help pay for the new clubhouse, produce monthly bulletins and help maintain facilities, leaders of the Masquers began pitching the idea of filming their Revels as shorts to film studios like Warner Bros. in 1930. By July, the group decided to produce a series themselves, and Harry Joe Brown convinced RKO-Pathe to pick up the series with him as producer and Edward Earle as associate.

American Cinematographer in early 1931 described their first short, “Stout Hearts and Willing Hands,” which revived the Keystone Kops, featuring Ford Sterling, Chester Conklin, Jimmy Finlayson, Hank Mann, Mack Swain and Clyde Cook in costume. Cinematographer John W. Boyle spoke about working with the dozens of Masquers who appeared in cameos in the production. He described why they were making the films: “They need a new clubhouse. Times are hard. But they take advantage of these slow times when many of them are not working to come together in cooperation and generosity.” Alec B. Francis and Mary Carr possessed a mortgage on their house, which Lew Cody owned the rights to and was threatening to force them out. Laura La Plante played Little Nell.

The second short in the series, “Oh! Oh! Cleopatra!” featured Bert Wheeler and Robert Woolsey and many Masquers in an Egyptian tale, filmed with the Dunning process. The third short, “Wide Open Spaces,” a burlesque of “The Girl of the Golden West,” starred Dorothy Sebastian, Antonio Moreno, Ned Sparks, William Farnum, and Clyde Cook.

“Grand Junction Hotel,” directed by William Beaudine, featured Edward Everett Horton, Frank McHugh, Lionel Belmore, Chester Conklin, Bobbie Vernon, James Finlayson, Hank Mann and Max Davidson in a murder mystery. Horton went on his honeymoon to a hotel, where his sleepwalking bride disappeared, and all began looking for her. Reviews called it a “highly entertaining broad comedy.” The July 27, 1931 Variety stated that they were now using the profits to set up a fund to help down on their luck members through financial difficulties.

Other shorts included “Two Lips and Juleps” or “Southern Loves and Northern Exposures” starring Conway Tearle, “The Bride’s Bereavement” with Charles Ray, “Through Think and Thick” or “Who’s Zoo in Africa,” directed by Mark Sandrich, a Tarzan parody with Walter Catlett, Max Davidson, Crauford Kent, and others, “Iron Minnie” or “Railroad Man’s Daughter,” “Rule “Em and Weep” with James Gleason, Sam Hardy, and Glenn Tryon, “The Moonshiner’s Daughter” or “Abroad in Old Kentucky,” “Stolen by Gypsies,” or “Beer and Bicycles,” with Charles Ray, William Farnum, and Luis Alberni, and “Lost in the Limehouse,” a Sherlock Holmes parody with Reginald Denny, and Laura La Plante. All received good reviews for what the trades called “Parodying travesties.” The series allowed them to burn up the mortgage and own their home out right. Unfortunately, these films are very difficult to locate now.

By the early 1930s, the group allowed non-professional members such as Constantin Bakaleinikoff, Anton Grot, Elmer Fryer, and Colonel Harry Baine to join, paying $75 dues and an entrance fee of $100, while members paid dues or $60 along with an entrance fee. The funds helped keep the group rolling, paid the bills, and helped support those in need, who sometimes lived at the club. The clubhouse was open from 8 a.m. to midnight, and required members to sign their name and address in the guestbook. Rules included such items as no strangers allowed, no business could be conducted, nothing could be removed, no dogs could enter, along with no women most of the time, no boisterous conduct or playing of instruments at odd hours, no gratuities, and no dice or poker.

The group performed weekly shows under the direction of member “jesters,” along with special events at holidays like St. Patrick’s Day, birthdays, and anniversaries. They also hosted wakes and acted as pallbearers at members’ services. The group guaranteed no one was forgotten. They raised money for charity and worked for causes promoting the entertainment industry and betterment of others. The Masquers truly followed their motto, “They laugh to win.”