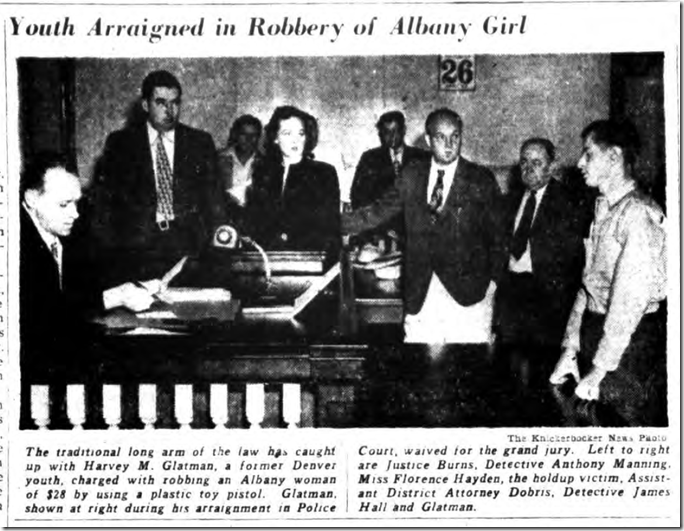 Aug. 26, 1946: Harvey Glatman is arraigned, published in the Knickerbocker News of Albany, N.Y.

In case you just tuned in, I did quite a bit of research on the early years of serial killer Harvey M. Glatman for an upcoming TV show and thought I would share it on the L.A. Daily Mirror.

The story so far: Harvey Glatman’s mother took him to stay with relatives in New York after he was arrested in Colorado on charges of attempted robbery. Police said he was suspected of “terrorizing girls on Capitol Hill in Denver” by accosting them, undressing them and tying them to trees.

On Aug. 17, 1946, he set off on a plan to commit holdups in what he later called “the outlying sections,” taking some clothesline, a penknife and buying a toy gun for 35 cents.

On the morning of Aug. 18, 1946, he awakened after spending the night in the woods around Yonkers, having stabbed Thomas Staro,  who got free of his bonds while Glatman was tying up Staro’s woman companion, Doris Thorne, during an attempted robbery. Yonkers detectives identified Glatman through a dry cleaner’s mark found on the jacket he left at the crime scene.

Glatman said he walked through the forest until he reached Tarrytown, N.Y., and took a train to Albany, N.Y.

In Albany, Glatman rented a room on Columbia Street and waited for several days. 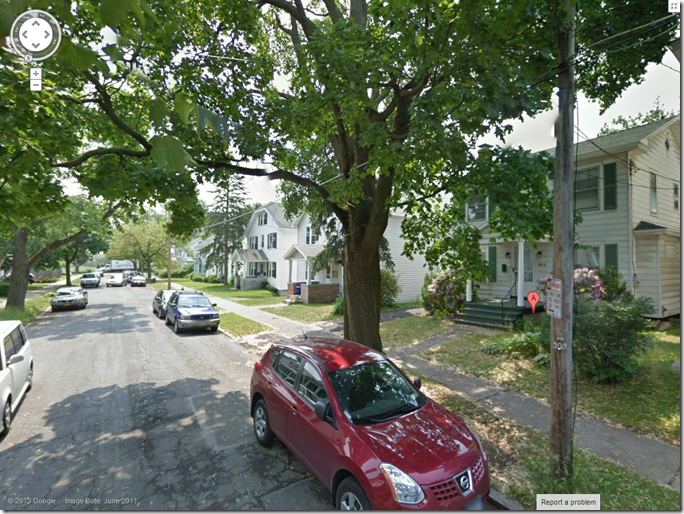 Lancaster Street in Albany, N.Y., via Google Street View, site of a holdup by Harvey Glatman.

On Aug. 22, 1946, shortly before midnight, Florence Hayden was robbed near her home at 800 Lancaster by a man who threatened to shoot her.

“Don’t scream. This is a stickup. If you do, you will get a bullet in the back,” he said, according to the Knickerbocker News.

Hayden told police she gave the robber her purse, which contained $28, a rosary and some personal items.

The robber ordered her to put her hands behind her back so he could tie them. Realizing that if the man was going to tie her up, he was no longer holding a gun, she turned around and confronted him. She grabbed his shoulders and screamed, scaring him away.

Hayden described the robber as about 18 years old, 5 feet, 9 inches tall, weighing about 135 pounds. He had dark hair and was wearing a dark brown shirt, she said.

Realizing that all three women had been victimized by the same man, Albany police swarmed the Pine Hills neighborhood on Saturday, Aug. 24, in search of the robber they nicknamed “the Phantom Bandit.”

At Ontario Street and Western Avenue, Detectives Anthony Manning and James Hall arrested Harvey M. Glatman, 18, of Denver, who was carrying a toy plastic pistol. He was positively identified by all three victims.

During his arraignment by Albany Police Court Judge Francis J. Burns, Glatman waived action by the grand jury. At his trial, he was sentenced to five to 10 years in prison.

In 1951, upon his release from Sing Sing,  Glatman was immediately charged by Yonkers, N.Y. authorities in the 1946 attack on Thomas Staro and Doris Thorne. At that point, Glatman was emaciated, according to news accounts, and the prison psychiatrist told the judge that returning Glatman to prison would probably kill him.

Westchester County, N.Y., Judge Arthur D. Brennan ruled that Glatman could be released to his father, Abe, and taken back to Colorado for psychiatric treatment, with parole transferred to Colorado authorities.

In 1956, Glatman was discharged from parole. By 1957, he had set himself up as a television repairman in Los Angeles, and began passing himself off as a photographer so that he could prey on young women whom he hired as models. He was arrested after his last intended victim fought with him and took his gun.

Harvey Murray Glatman was executed in the California gas chamber on Sept. 18, 1959. Acting Warden Louis Nelson referred to it as “the most routine” execution he had ever witnessed.