Posted on November 7, 2013 by lmharnisch

I have spent far more time than I intended on the “Masked Marvel Murder” and not just because it’s an intriguing, unsolved homicide. There are several lessons for the serious researcher and historian, particularly the insight it offers into the 1947 Black Dahlia case.

For example, we meet many of the same individuals who will appear in the Elizabeth Short killing, but the Bacon case is relatively pristine compared to the layers upon layers of fictionalized nonsense about the Black Dahlia. There is only one shoddy, heavily fictionalized book dealing with the case at any length instead of the five-foot shelf of nonsense about the Black Dahlia. And no one has come forward – yet – to claim that their father killed David G.G Bacon. 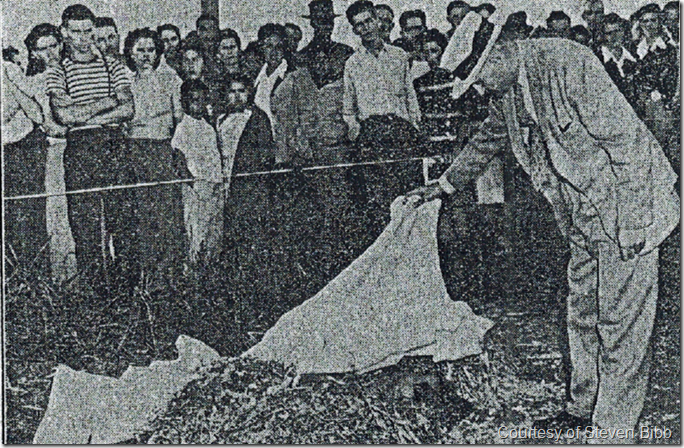 Our first lesson is about how the LAPD handled a murder scene in 1943. This photograph shows some sort of official with Bacon’s body. The individual is unidentified, but I’m fairly certain it isn’t Detective Harry Fremont or Detective Lloyd Hurst (the homicide detectives were famously well-dressed, unlike this gent), so my hunch is that it’s someone from the coroner’s office, a man who appears in several other crime scene photos.

But do you see anything remarkable about this picture?

Very good. Obviously, crime scene tape did not exist in the 1940s, so the LAPD homicide detectives carried rope in their call car to block off a crime scene. I had been told this by retired Capt. Ed Jokisch, but this is the earliest photographic evidence I have found of a crime scene being blocked off with rope by the LAPD. 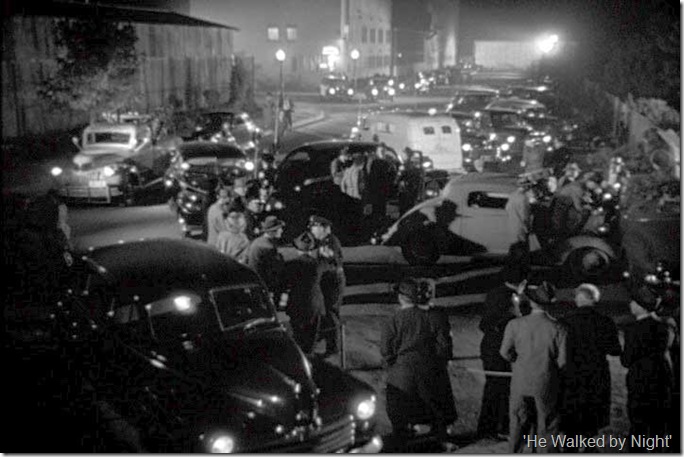 We also find rope used in the 1948 film “He Walked by Night,” on which LAPD Detective Marty Wynn was a technical advisor — the film that was the inspiration for “Dragnet.”

I mention this because in later years, the question was raised about how well the police guarded the Black Dahlia crime scene. No such barrier is visible in the many Black Dahlia crime scene photos that have spread all over the Internet. Never at a loss for a good story, former Los Angeles Examiner reporter Will Fowler would claim that he walked through the crime scene, although all existing photos show him standing on the sidewalk, not in the grass and weeds.

The reason that no barrier is visible in the Black Dahlia crime scene — and it took me quite a while to determine this — is that the LAPD sealed off the entire block of South North Avenue.  If you look carefully at the crime scene photos, you will see uniformed officers holding back people up at the corner of Norton and Coliseum Street.

Then there are the lessons about the newspaper coverage: The subject of homosexuality and what I call “the sideshow,” the false confessions by crackpots and publicity seekers that overwhelmed the Black Dahlia story in 1947. The only thing missing in the Bacon case is a stream of crank mail that newspapers were delighted to publish in the Dahlia killing.

Although the “Masked Marvel Murder” was never solved, it disappeared from the newspapers relatively quickly compared to the Black Dahlia case. Bacon was killed Sept. 12, 1943, (pay attention to the date of death, fact-checkers, because many writers get it wrong – which should tell you something about the caliber of their research), and the stories appeared the next day and continued to  Oct. 16, 1943, less than a month.

Recall that The Times never put the original Black Dahlia coverage on the front page — except for the one day when it seemed that Army Cpl. Joseph Dumais was a viable suspect. The same is true with the Bacon killing. The Times was squeamish about killings in the 1940s and rarely put them on the front page.

The “Masked Marvel Murder” faded from view rather quickly, but long enough to attract a couple of bogus confessions. The first involved Blakeley C. Patterson, who told the Examiner that he was a friend of Bacon and that the actor was being blackmailed. Actually, all Patterson wanted was to get into the movies and all he got was a trip back home to Minnesota.

The second bogus confession involved Charles R. While, who made his statement as he was being questioned about another crime in another jurisdiction (in this case, the Santa Monica Police Department), which forwarded the information to the LAPD. Dumais, being questioned at Ft. Dix, N.J., did exactly the same thing in the Black Dahlia case.

While was released from custody after interrogation by Fremont and Hurst.

And  there is the question of Bacon’s clandestine lifestyle — his coded diary, his secret hideaway, etc. — and how it was handled by the newspapers.

David G.G. Bacon, left, with John Roosevelt and Wallace Beery in a publicity photo for the 1936 Hasty Pudding show “The Lid’s Off.”

Bacon seems to fall somewhere into the LGBT spectrum, an area that would put a crimp in the public image of an aspiring movie actor, and a subject which newspapers in the 1940s pretended did not exist. The word “homosexual” appeared rarely – if ever – in The Times in that era and even the Hearst papers at their most lurid found the subject problematic. In the Black Dahlia case, the Los Angeles Examiner and Herald-Express resorted to cryptic, oblique references to convey the LAPD homicide investigators’ theory, abandoned after a few days, that Elizabeth Short was the victim of a lesbian love triangle.

So it’s rather shocking to read this May 21, 1944, recap of the case by crime writer Peter Levins (d. 1950) a reporter for the New York Daily News and Hearst’s American Weekly.

That’s pretty frank for 1944. But Levins had another bombshell:

It is shocking to say the least to find this sort of account in a newspaper of the 1940s. It is entirely possible it was taken from the Examiner or Herald-Express, but I will leave that question to someone who has a day to spend in the microfilm room of the Los Angeles Public Library.

Unfortunately, the article — part of a trove of Bacon material shared by  Steven Bibb — is incomplete. And we don’t know Levins’ track record on accuracy. So I will leave this question to be pursued by someone with the time and the interest to do so.

And finally, the “Masked Marvel Murder” reveals once again — as if it were necessary — just how dreadful Wikipedia really is:

Wikipedia repeats the worst trash from “Howard Hughes: Hell’s Angel,” without attribution. But I would expect nothing less. Notice for starters that Wikipedia says Hughes signed Bacon “to an exclusive contract with the intention of casting him in “The Outlaw” in 1942. Of course, as we know from Part 11 of “The Masked Marvel Murder,” “The Outlaw” was actually cast in 1940.

And so ends our lengthy detour into the “Masked Marvel Murder.” Clearly, there is more to be explored, but I have to leave that to someone else. So many stories, only one Larry Harnisch.

Please give a special thanks to Steven Bibb for generously sharing his material on the case. Without his help, these posts would have been impossible.