Read the entire edition online at USC, scanned from a copy at the Huntington Library.

The Los Angeles Star visits the new waterworks and describes its construction.

The project consists of a dam 395 feet long “formed by a double row of 24-foot piles driven 18 feet into the ground.”

“From the reservoir formed by this dam the water will be lifted to a height of 40 feet by a wheel revolving by the action of a current formed by a flow of water from the dam.”

“The water thus elevated is delivered on the north bank of the river and will be received in a covered ditch, one foot by two in size, and conveyed to a point near the Catholic burying ground, a distance of about one-half of a mile, where it is proposed to build a reservoir and from whence citizens will be furnished with water through the medium of pipes.”

Mrs. Jane Swisshelm seems to want to exterminate all the Native Americans in Minnesota. 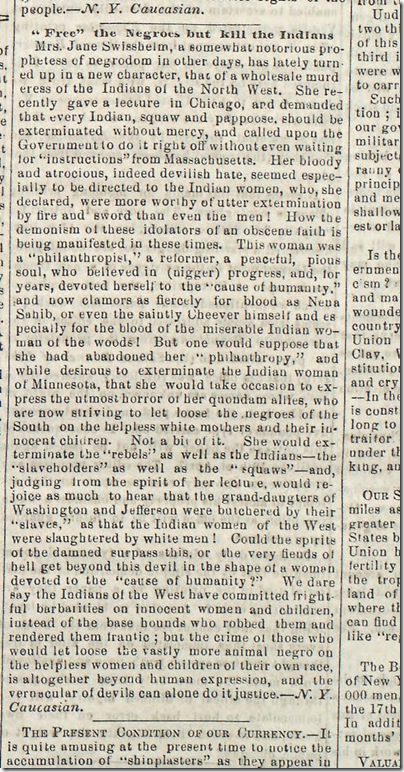 I am retired from the Los Angeles Times
View all posts by lmharnisch →
This entry was posted in 1863, City Hall, Civil War, Native Americans and tagged #Civil War, 1863, Native Americans, real estate, water. Bookmark the permalink.