A photo of Angels Flight listed on EBay with bids starting at $2.50.

This image Angels Flight is one of several C.C. Pierce photos up for auction on EBay. To me, one of the most interesting things about the Pierce photos is his annotations on the back, and I particularly like what he said on this one, despite the mistakes.

Some of the Pierce photos on EBay: Central Park (Pershing Square) | Ralphs Grocers 6th and Spring

This image of Angels Flight is also online at part of USC’s digital collection of Pierce photos. 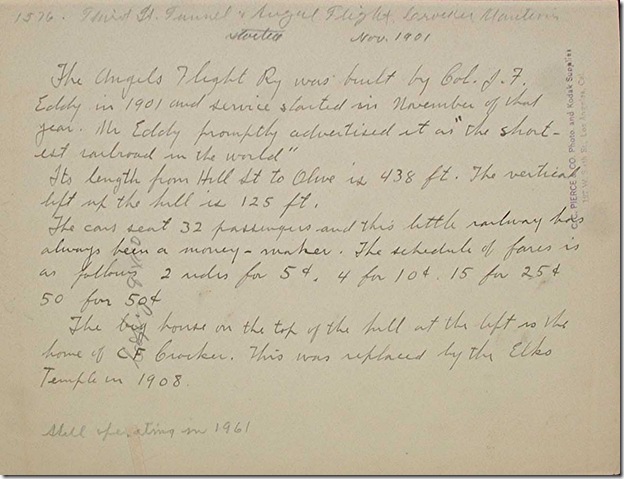 The Angels Flight Ry (railway) was built by Col. J.F. (actually J.W.) Eddy in 1901 and service started in November of that year. Mr. Eddy promptly advertised it as “the shortest railroad in the world.”

The big house at the top of the hill at the left is the home of C.F. Crocker. This was replaced by the Elks Temple in 1908.

Someone else notated: Still operating in 1961.

Pierce was slightly wrong in that although Angels Flight was under construction in November 1901, it formally opened on New Year’s Eve 1901 with an inaugural ride by Mayor Snyder.

I am retired from the Los Angeles Times
View all posts by lmharnisch →
This entry was posted in Downtown, Found on EBay, Photography and tagged #C.C. Pierce, #DTLA, 213, Angels Flight, photography. Bookmark the permalink.