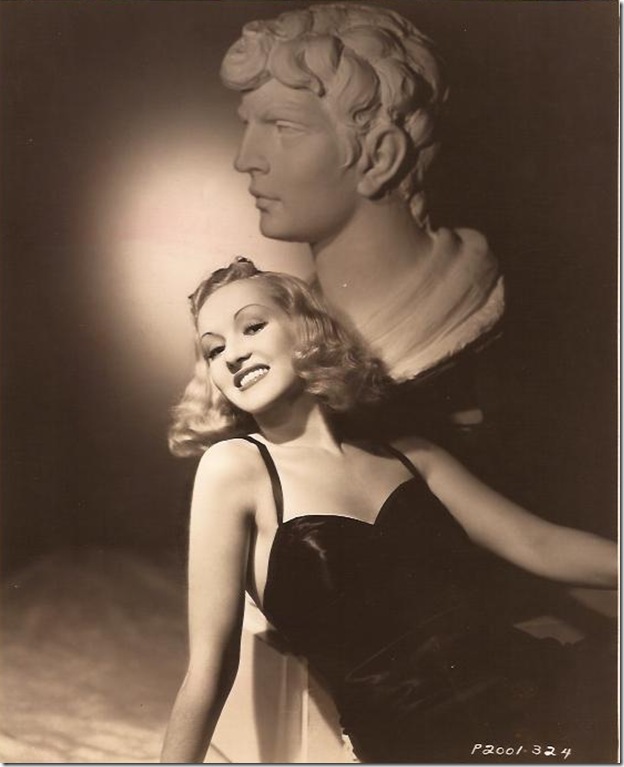 A 1938 publicity photo of Betty Grable listed on EBay with bids starting at $25.

Betty Grable is so damned adorable. Her oft-repeated self-assessment does not do her justice: “As a dancer I couldn’t outdance Ginger Rogers or Eleanor Powell,” she once said. “As a singer I’m no rival to Doris Day. As an actress I don’t take myself seriously. I had a little bit of looks without being in the big beauty league. Maybe I had sincerity. And warmth. Those qualities are essential.” She was right about the sincerity and warmth, but she under-estimated her singing and dancing skills (I put her up there with Day and Dinah Shore as a singer). Her 1943 iconic pin-up photo—taken by Frank Powolny during the filming of Sweet Rosie O’Grady—will follow her through eternity, but you have to see Betty in action to appreciate her.

She was born in 1916 and her stage mother had her in vaudeville before the afterbirth had cooled. When talkies hit, Betty was dragged to Hollywood and almost immediately found work: Busby Berkeley spotted her talent and featured her in Whoopee!, The Kid from Spain and Palmy Days. She labored through the 1930s as a starlet and chorine in countless films, never quite clicking. It wasn’t till she got good press for her Broadway turn in Du Barry Was a Lady (1939) that 20th Century-Fox took notice, signed Betty up and made her an “overnight success” after ten years in the movies.

In the meantime, she was also getting around socially: she married Jackie Coogan (former Kid, future Fester) from 1937-39, and stood by him during his lawsuit against his mother and stepfather. She dated George Raft, Artie Shaw, Desi Arnaz (pre-Lucy, of course), and in 1943 she married trumpet player and bandleader Harry James (“I want a girl just like the girl that married Harry James,” went the song parody). They had two daughters and stayed married till 1965, and whatever broke them up, they kept to themselves.

Fox finally figured out how to best use Betty Grable, and featured her in a delightful series of brightly-colored (even the black and white ones) rock-candy musicals through the war years: Down Argentine Way, Tin Pan Alley, Moon Over Miami, Song of the Islands, Footlight Serenade, Springtime in the Rockies, Coney Island, Sweet Rosie O’Grady, Pin Up Girl, Diamond Horseshoe, The Dolly Sisters. Silly, light-as-air, get-your-mind-off-your-troubles films, all of them still a great way to waste 90 minutes and wind up smiling. Her best leading man was probably John Payne, so tall and gorgeous, and a surprisingly good song-and-dance man himself. She was teamed with Alice Faye in Tin Pan Alley and the two became great pals; and the matchless Fox supporting players brought on their scene-stealing charms: Carmen Miranda, Charlotte Greenwood, Edward Everett Horton, Cuddles Sakall, Jack Oakie, Phil Silvers, Cesar Romero.

Everything pretty much went to hell after the war, for all the pin-up girls. Fox put Betty into four musicals with the equally adorable Dan Dailey—kind of a male Betty Grable—but the films didn’t really have the boisterous joy of her wartime vehicles (the scripts and the songs sucked, mostly).  She went on working—notably in the great How to Marry a Millionaire—and after leaving films she stayed active on TV and onstage. The fashions of the late ’60s/early ’70s were not flattering to any middle-aged woman, but Betty fared better than poor Rita, Veronica and Hedy.

She died in the Great Celebrity Apocalypse of 1973: remember, when she, Veronica Lake, Joe E. Brown, Robert Ryan, Lon Chaney, Jr., Bruce Lee, Jack Hawkins, Ernest Truex and Fay Holden all keeled over en masse? Only 56 years old, the cigarettes done her in. Betty Grable is high on the list of people I’d love to write a book about—but her daughters have begged off. They were very sweet, and it was nice of them to get back to me, but they said they have been burned by too many writers and do not want to rehash their parents’ lives, which I totally respect. I leave you with this clip of Betty showing off her singing and dancing chops—and being damned adorable—in Footlight Serenade (1942): http://www.youtube.com/watch?v=sedk6Ps1K0E

6 Responses to Eve Golden / Queen of the Dead – Betty Grable