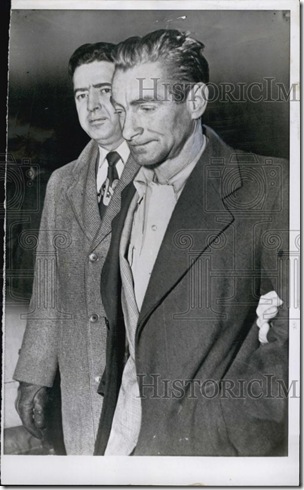 A vendor on EBay has listed this AP photo from New York as showing Ralph von Hiltz, the “murderer of Black Dahlia.” (Price: $25.44). This is just another crackpot confession. The Times reported in 1956 that then-Chief of Detectives Thad Brown said Hiltz had been interrogated in 1947 and positively eliminated.The Times said Hiltz was just looking for a free trip to Los Angeles because New York is cold in January.Here’s the AP caption on the back:

NEW YORK, Jan. 6. — POLICE CHECKING HIS ‘BLACK DAHLIA’ STORY — Man, foreground, who identified himself as Ralph Von Hiltz, leaves police station today with unidentified detective for upper Manhattan court while police tried to check his story of his part in the 1947 Black Dahlia murder case in Los Angeles. Von Hiltz, 44, had been charged with vagrancy and put in a cell for overnight detention. Police said he walked into a police station, confessed a part in the Black Dahlia murder and accused another man of the actual slaying.

I am retired from the Los Angeles Times
View all posts by lmharnisch →
This entry was posted in 1947, 1956, Black Dahlia, Found on EBay, LAPD and tagged 1947, 1956, black dahlia, lapd. Bookmark the permalink.