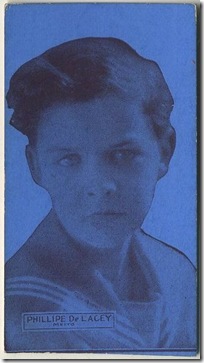 Child stars often face harsh realities as they age. The public doesn’t find them as cute, roles stop coming, and life can become cruel. For every talented child actor that goes on to a successful career as an adult like Shirley Temple, Jodie Foster, and Elizabeth Taylor, there are depressing stories of those who come to tragic ends, like Carl “Alfalfa” Switzer and Bobby Driscoll. Philippe de Lacy rode the rollercoaster of fame from popular juvenile performer to struggling young actor and finally to success behind the scenes as a director and producer in the heyday of Cinerama.

De Lacy landed his first role at the tender age of 3, when he appeared onstage in “The Riddle Woman” with Geraldine Farrar, after a French woman and friend of Farrar noticed him at a party and brought him to the actress’ attention. The lad soon landed roles in topnotch films, appearing with Alla Nazimova in “The Doll’s House” in 1922, playing Mary Pickford’s younger brother in the 1923 film “Rosita,” and acting as Michael Darling in Paramount’s wonderful 1924 movie “Peter Pan.” His tender looks and expressive acting won him a large following. An ad in the April 1, 1925 Los Angeles Times called him “a star of tomorrow.” 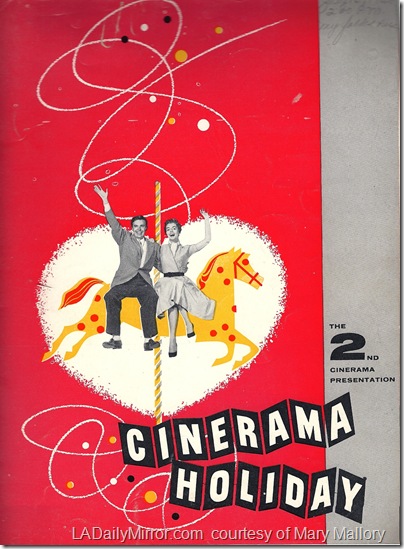 Young De Lacy’s personal background drew him audience sympathy as well. Born in a farmhouse outside Nancy, France, in 1918, the child was soon orphaned because of World War I. His father died fighting at Verdun, and his mother perished in an attack on their village, which was “wiped from the face of the earth” by German artillery per the Los Angeles Times. A young Englishwoman by the name of Edyth de Lacy found him at 18 months old and adopted him, bringing him to America. She had become a trained nurse and traveled to France early in 1917 with the women’s overseas hospitals to serve and tend the wounded. Both adored each other.

For the next several years, De Lacy landed most of the major child roles in features, appearing in such films as “The Flesh and the Devil,” “The Student Prince in Old Heidelberg,” “Love,” “The Four Devils,” “The Mysterious Lady,” “Don Juan,” “The Way of All Flesh,” “The Four Feathers,” “Beau Geste,” and “Sarah and Son.” He even appeared in a two-strip Technicolor short called “The Blue Boy,” which told a story about the painting of the same name owned by Henry Huntington. The child supposedly received 5,000 letters a month from a doting public.

De Lacy possessed precocious talent for acting, from film to radio and the stage. He somehow managed to act on film stages during the day and then often tread the boards at night. Young De Lacy appeared on KHJ’s “The Children’s Hour” radio show several times starting in 1925, performing readings. He played in the Writers’ Club production of “Napoleon’s Barber” in 1926, produced by French actor/director Emile Chautard, as well as “The Magic Garden” in March 1927 with Charles Clary, Hedda Hopper, and Cesare Gravina.

In 1928, De Lacy took part in the Hollywood Bowl’s various Easter festivities as well as played on stage in “Window Panes,” a spiritual play written by former silent film actress Olga Printzlau. Edwin Schallert in the Sept. 16, 1928, Los Angeles Times praised the show and the boy, noting that “Philippe de Lacy charmed by his presence, and touched the heart of the audience… .”

The boy earned praise for stagework in 1929 and 1930 as well, appearing in the Shakespeare Foundation’s production of “Richard III” in November-December 1929, as well as starring in Maeterlinck’s “The Blue Bird” with Virginia Davis, star of Walt Disney’s “Alice” comedies, at the Pasadena Community Playhouse over Christmas 1929. In 1930, De Lacy appeared opposite Henry Kolker and Alan Mowbray in the play “Topaze” at the Belasco Theatre.

As sound films became the industry standard in 1931-1932, De Lacy’s career came to halt with the onset of puberty. Though he was devastated at the sudden end of getting roles, De Lacy stayed calm, recovering his composure and realizing that his career wasn’t his life. He and his mother moved to New York City, where he studied acting and appeared in two productions on Broadway, “Growing Pains” and “Stranger at Home.” de Lacy found time to become an American citizen in September 1935. The now young adult de Lacy began studying about behind the scenes filmmaking.

By the early 1940s, De Lacy had struck up a friendship with French filmmaker Louis de Rochemont, and gained experience working on “March of Time.” De Lacy landed a credit as editorial associate on “We Are the Marines” in 1942, under De Rochemont’s direction, and served as technical director for De Rochemont’s 1944 film “The Fighting Lady,” a documentary about the United States aircraft carrier Yorktown. The documentary possessed a wealth of great talent in its cast and crew. Master photographer Edward Steichen directed the production, with uncredited work by William Wyler, Alfred Newman served as musical director, Robert Taylor provided narration, and Charles Boyer provided French narration.

De Lacy supposedly directed one episode of the “Buster Keaton Show” in 1950 as well as a a country/western barn dance called “Town Hall Party” in 1952.

He obviously loved challenges, as by the early 1950s he was assisting De Rochemont with directing the second Cinerama feature, “Cinerama Holiday.” In this film, two couples, one American, and one Swiss, visit Europe and the United States respectively. Americans John and Betty Marsh visited Europe, and Swiss couple Fred and Beatrice Troller traveled the United States on motorscooter. In a 1955 interview with the Los Angeles Times, De Lacy revealed that he had crossed the United States six times during filming, ending up on an aircraft carrier with jet fighters. De Lacy considered the highlights of “Cinerama Holiday” to include the carrier sequence, the bobsled run through the Alps, riding the California Zephyr train in its observation deck, visiting Paris’ Lido nightclub, and a New Orleans jazz session and funeral. The Zephyr sequence alone required three months of preparation. He was proud about the success of the jazz sequence, considering it very intimate for Cinerama, in that it was shot with only a few people visible, from a low angle, closeup, and in montage setting. At the end of the film, the couples met up in New York and viewed themselves “in the picture” in Cinerama.

American composer Morton Gould was selected to create a diverse score to highlight the different sequences, all recorded by 75-piece symphony orchestra. The Paris sequences featured a Mass at Notre Dame Cathedral, a visit to the Left Bank and to the Louvre, sailing of toy boats at Luxembourg Gardens, and a performance by Guignol puppets of “Little Red Riding Hood.” Journalist Art Buchwald, correspondent for the International Herald Tribune, interviewed the Marshes in their Paris hotel room.

As critic Philip Scheuer noted in his November 15, 1955, Los Angeles Times review, “if the world is your oyster, then Cinerama is the half shell you must serve it on.” The “Cinerama Holiday” booklet claimed, “Cinerama Holiday is a party!” What better way to end a party than to eat, and especially to eat fondue! One of the last pages in the booklet focused on the fun travelers have in Switzerland, with its relaxing and neighborly atmosphere. It recounts that after a day of skiing, people settle in for Swiss cheese fondue, “which is another of the pleasures of the country… .” The page concludes with a recipe for the fondue.