Eve Golden: Queen of the Dead 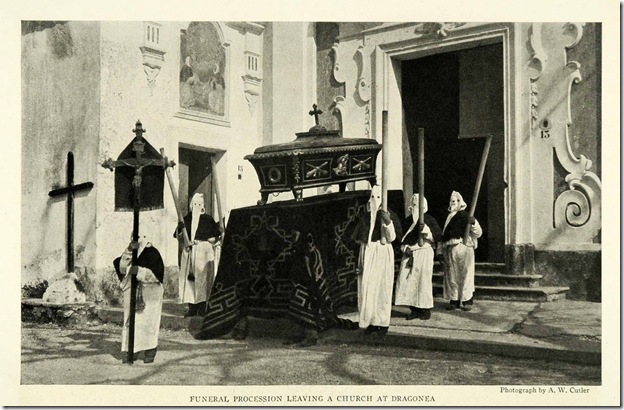 A photo of a funeral procession in Dragonea, Italy, listed on EBay at $40.95.

•  I love Little Me, one of the funniest books ever written. Grab it. Now. The photos—period mock-ups recreating the 1900s-50s—were taken by celebrity and dance photographer Cris Alexander, who died on March 7, at 92. He had acted and/or danced on Broadway (On the Town, Present Laughter, Wonderful Town, Auntie Mame, Two by Two), as well as on radio, TV and in movies—but his photographs for Little Me will live forever. The 1961 book—a naughty, wildly over-the-top movie-star memoir—was penned by Auntie Mameauthor Patrick Dennis, and “starred” such theater pals as the gorgeous Jeri Archer (as heroine Belle Poitrine), Dodie Goodman, Kaye Ballard, and the delicious Kurt Bieber as Letch Feeley. Alexander’s husband, dancer Shaun O’Brien, appeared as Mr. Musgrove; he died just last month.

•  More things that make me feel old: Josie, from Josie and the Pussycats, died on March 14,at the age of 82. Not the actual cartoon character, of course, but Josie DeCarlo, wife of comic book illustrator and Josie creator Dan DeCarlo. The character started in 1963, inspired by a cruise the couple had taken: “I had a costume for the cruise,” Josie told  the New York Times. “One day, I came in with a new hairdo with a little bow in my hair and he said, ‘That’s it!’” The comic book became a cartoon show in 1970 (by which time I was too old to bother watching it, I was more into The Mary Tyler Moore Show and Green Acres). Josie and the Pussycats ran for two years (and went into Outer Space!), and was turned into a 2001 movie which no one saw.

•  The delightfully-named singer Terry Teene, 70, died on March 9, after his bike was hit by a truck in Texas. Born Terence Blaine Knutson, he was a rockabilly star in the 1960s (his biggest hit was “Curse of the Hearse”—he also sang “Pussy Galore,” “We’re Going to Put Iowa on the Map,” “Fun to Be With” and “Perfect 36”). Teene also performed as ToBo the Clown and Clownzo, and was president of the Cavalcade of Clowns, though this probably had nothing to do with his being run down by a truck.

•  This is sad: musical-comedy actor John Bisom, 47, killed himself on March 16. I have no idea why, of course, but I have lately been lamenting the over-supply of talent and the under-supply of roles in theater. I’ve been going to Broadway’s Encores! revivals, and every chorus member is freakishly talented. I also saw Tari Kelly fill in for Sutton Foster in Anything Goes, and thought, “why is this woman not a superstar?” I am so glad I got out of acting while I was young enough to run for my life. The late Mr. Bisom appeared in Mamma Mia!, Anyone Can Whistle, The Full Monty, The Music Man, Into the Woods, Sweeney Todd, and numerous other shows (as well on TV: Desperate Housewives, Charmed, Roswell). Director Shauna Markey called him “one of the most kind-hearted, gentle spirited, fun loving, generous, and, not to mention insanely talented men I’ve ever had the privilege of knowing.”

4 Responses to Eve Golden: Queen of the Dead