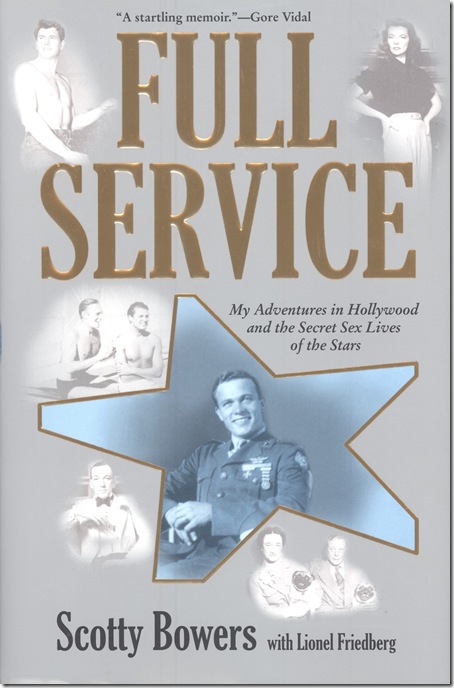 In case you just tuned in, I’m doing a little fact-checking as I go through Scotty Bowers’ “Full Service.” This will be fairly tedious except to a research drudge.

I have been examining what Scotty Bowers describes as his first Hollywood encounter, involving Walter Pidgeon and Jacques “Jack” Potts, presumably in 1946. The last few posts have examined the home on Benedict Canyon where the alleged tryst occurred.

Unfortunately, even for the research drudge, creating a timeline for Jacques “Jack” Potts  makes the Pidgeon project seem easy. The mysterious Mr. Potts is lightly documented.

However, he did exist, and that’s a start. 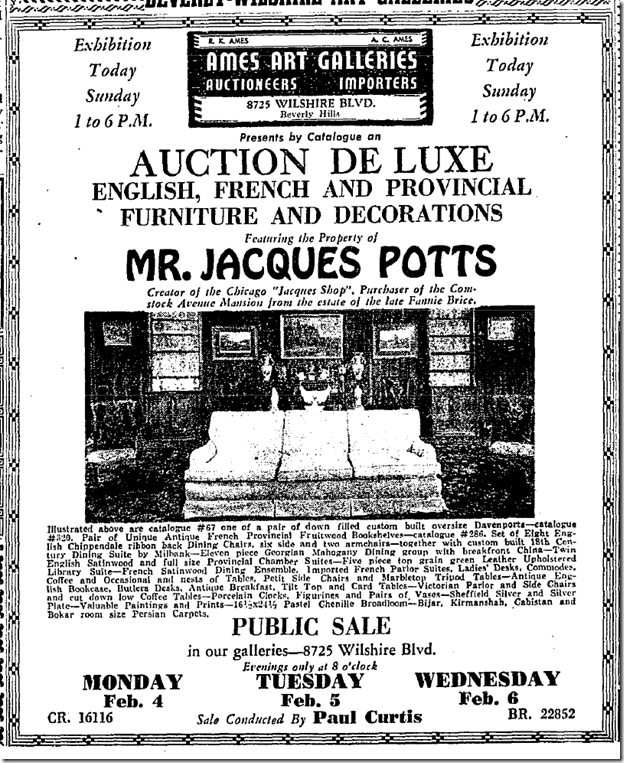 Feb. 3, 1952: A display ad in The Times offers furniture and antiques owned by Jacques Potts. Notice the reference to the home at 424 Comstock Ave. belonging to Fanny Brice (d. 1951).

And from Herbert G. Goldman’s 1993 biography of Fanny Brice, we learn that Jacques “Jack” Potts was actually Jacob S. Potts.

He appears in the 1942 Los Angeles City Directory, online via the Los Angeles Public Library.

Even better, we get the address of his shop, listed under Fur Dealers and Furriers:

Thus far we have confirmed that there was a man operating a shop called Jacques of Chicago, that his name was Jacob S. Potts, and that he lived in Beverly Hills as of 1942.

We also find this listing under Jacques….

Backtracking to 1938, we find this under Clothing Dealers — Women’s and Misses’ — Retail

And listed under Doherty, we find… 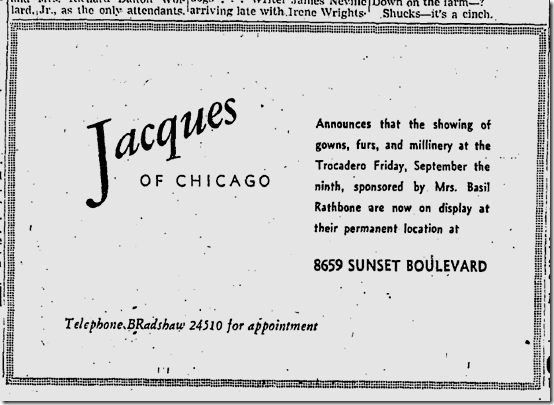 ProQuest is unable to read fancy lettering, so it didn’t detect “Jacques of Chicago.” Because the address is in regular type, we now find this display ad from 1938.

Now this is interesting: An ad from Aug. 17, 1947, for an auction of the store’s inventory and an announcement that the owner is retiring. This occurred about a year after the purported encounter with Bowers.

Thus we can conclude that Jacques of Chicago was in business at 8659 Sunset Blvd. from about 1938 to 1947. It seems increasingly likely that Jacques/Jack/Jacob S. Potts is the person in question at 1110 Benedict Canyon Drive, the address listed in the 1946 phone book.