In case you just tuned in, I’m doing a little fact-checking as I go through Scotty Bowers’ “Full Service.” This will be fairly tedious except to a research drudge.

Pages XI to X of “Full Service” set the scene on Hollywood Boulevard as it appears today, starting with Grauman’s Chinese Theatre, Kodak Theatre and the El Capitan, followed by a ruminations on the boulevard in the days when “bejeweled and fur-clad women  once strolled arm in arm with tall, handsome men in tuxedos” and how that has been replaced by tourists during the day and “drunks, drug pushers and the homeless” at night.

A new fire station for the Los Angeles Fire Department was rising there. Like a floodgate suddenly opening, a million memories enveloped me. This very spot, this place where cranes, concrete mixers, and metal scaffolding now stand, is where it all began for me. A little gas station once occupied that corner. Shortly after I first got here I worked there as a young pump attendant. But it didn’t take me long to learn to do more than just pump gas. Through a series of extraordinary incidents I became enmeshed in a wild world of sexual intrigue the likes of which few people can even begin to imagine.

Over the years more Hollywood personalities secretly congregated at that little gas station than anywhere else in town. It was a scene that saw as much furious action as the busiest studio back lot. The place became a magnet for those in quest of carnal thrills and escapism of every kind. A cavalcade of movie stars and others were attracted to the station like the proverbial moth to a flame. I became the go-to guy in town for arranging whatever people desired. And everybody’s needs were met. Whatever folks wanted, I had it. I could make all their fantasies come true. No matter how outrageous or offbeat people’s tastes, I was the one who knew how to get them exactly what they were after. Straight, gay, or bi; male or female; young or old-I had something for everyone. The vice squad and the press were constantly lurking on the periphery, eagerly waiting to pounce. But I always managed to elude them.

The gas station was the portal that eventually took me into an exclusive world where high-class sex was everything. I’ve had many occupations during my life but, to be honest, what really drove me was a desire to keep people happy. And the way I did that was through sex. Arranging sexual liaisons for folks from all walks of life became my raison d’etre. When I first arrived here the stars were owned by the studios, which were heavily invested in them. Naturally, they needed to protect their investments. But people still wanted to have…

So our first quest is to identify the gas station where all of Hollywood supposedly filled their tanks – with ethyl.

Here’s what we find in the 1956 Los Angeles city directory, which has been placed online by the Los Angeles Public Library.

Let’s see what else we can find.

We have a name associated with the station at 5777 Hollywood Blvd. in the 1942 city directory:

Let’s see what else we can find. 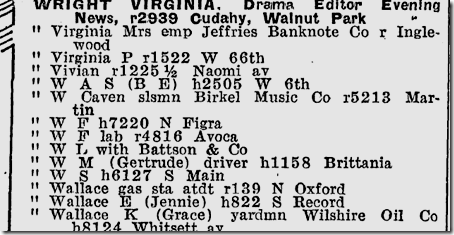 The 1938 city directory lists a Wallace Wright as a gas station attendant living at 139 N. Oxford. Is this the same Wallace Wright? Perhaps. But there doesn’t seem to be a station at 5777 Hollywood Blvd. yet.

Let’s jump to the newest directory and work backward:

Nothing in the 1987 directory.

In 1973 it was the Hollywood Arco station:

And in 1965 it was Christie’s Richfield:

I am retired from the Los Angeles Times
View all posts by lmharnisch →
This entry was posted in Another Good Story Ruined, Books and Authors, Film, Hollywood, Lesbian, Gay, Bisexual, Transgender, Libraries and tagged #Los Angeles Public Library, #Scotty Bowers. Bookmark the permalink.