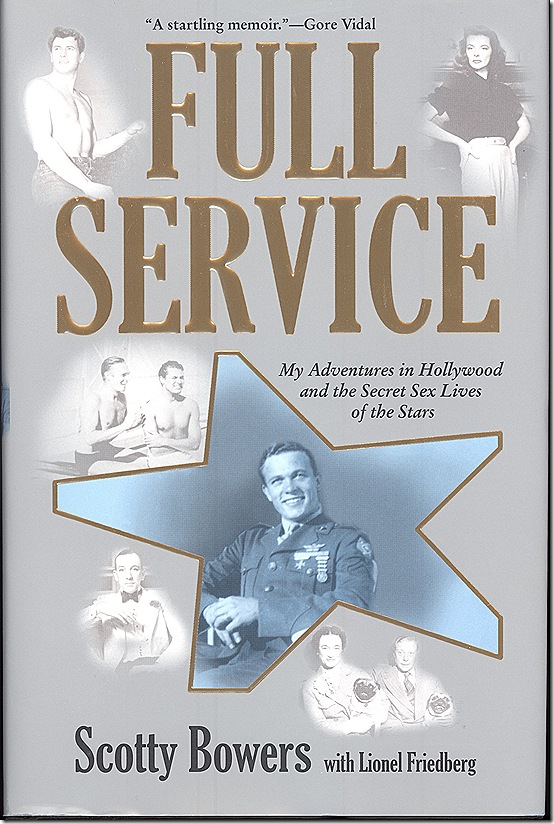 One of the guiding principles at the Los Angeles Daily Mirror is that history is not the exclusive domain of straight, white, Protestant males. As long as I have been blogging about Los Angeles history, the emphasis has been to document all the people who were marginalized by the mainstream press: Women, people of color, LGBT, etc. For example, for much of its history, the Los Angeles Times said nothing about the gay community except for crime stories and coded references in obituaries to “lifelong bachelors.”

Ideally, then, “Full Service” by Scotty Bowers, with Lionel Friedberg, would be a perfect match for the Daily Mirror. The memoir, subtitled “My Adventures in Hollywood and the Secret Sex Lives of the Stars,” promises to fill the gaps in the history of the local gay community from the 1940s to the 1960s.

Because another guiding principle at the Daily Mirror is an insistence on the highest standards of historical research (as in “Me vs. Wikipedia”).

Last week, I went to my favorite bookstore, Vroman’s in Pasadena, and bought a copy. I paid twice the price being charged on Amazon, but I believe in supporting one’s local, independent bookstore.

Oh dear. I had barely gotten past the title page when I encountered:

This manuscript is based on my memory and,
to the very best of my ability, reflects actual incidents
and personalities as I recall them.
-Scotty Bowers

This manuscript is based on roughly 150 hours of recorded
interviews with Scotty Bowers. I have added only factual details
regarding studios, productions, and various film shoots
to augment Scotty’s recollections, specifically where he
could not remember exact details himself.

Memory… “incidents and personalities as I recall them.” Not to prejudge, but it seems that “Full Service” may not adhere to the highest standards of historical research.

So I decided it would be fun to go through the book and give it a bit of fact-checking. This is a tedious, time-consuming task (longtime readers may recall “Blogging the Wolfe Book”) and I can’t promise how far I’ll get.

But, frankly, the first impression isn’t good. Remember the subtitle? “My Adventures in Hollywood and the Secret Sex Lives of the Stars.”

I flipped through the photos and except for a couple of childhood snapshots, one portrait from World War II and a current picture, all the rest are file photos “from the Neal Peters Collection.” I would sort of expect that someone who had nearly uncountable trysts with the stars might have gotten at least one inscribed picture.  You know, “Oh you kid! –Franklin Pangborn” or something like that.

For that matter, there’s no picture of the gas station where Bowers supposedly worked. Instead we get some unidentified Richfield station with the caption: “Sadly, I don’t have a photo of the Hollywood Boulevard gas station, but it looked much like this one.”

And on Page IX, we find this little bon mot: “A few decades ago, my good buddy Tennessee Williams began writing his own account of my life but before it saw the light of day I told him to destroy it.”

Alas, “Full Service” isn’t indexed, but Amazon’s “look inside” feature shows that an account of Williams’ purported biography of Bowers appears on Page 251-253. Because there’s no date to peg the incident, let’s put it aside for the moment and do a little digging – in the finding aid for Tennessee Williams’ papers at Columbia University – just  to see if maybe there’s a little tidbit about his “good buddy.” I suppose you would be surprised if I said there’s not a word about Bowers. Why look at this! Williams saved his address books and datebooks. Too bad they’re at Columbia, it might be fun to dig.

And look at this: A catalog of 11 linear feet of Williams’ works. Don’t see anything about a Bowers biography, though.

Gosh, the first paragraph and we’re already in trouble.

I am retired from the Los Angeles Times
View all posts by lmharnisch →
This entry was posted in Another Good Story Ruined, Books and Authors, Film, Hollywood, Lesbian, Gay, Bisexual, Transgender, Libraries and tagged #Full Service, #Scotty Bowers, #Tennessee Williams. Bookmark the permalink.