Posted on February 5, 2012 by lmharnisch

I was watching this movie the other day and thought:  that’s….

[Update: Let me begin by saying that I got this one wrong. I’m not a Westsider and my first guess, when it went by, was that this is the Malibu tunnel. Nope, it’s not.

[I didn’t have the time to follow all the routes on Google Street View to verify which is right – so many stories and only one Larry Harnisch.]

For fun, here’s a list of tunnels on state highways. It doesn’t list tunnels on county highways, however.

Most of “Harper” is interiors and (rather tacky) process shots… There are a few exteriors (freeways, a gas station, twisting mountain roads)… and this fun shot:

So much for the Porsche.

But this is what I really like about “Harper.” 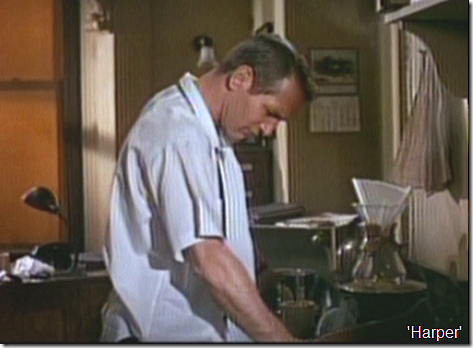 Paul Newman has a Chemex!

I am retired from the Los Angeles Times
View all posts by lmharnisch →
This entry was posted in Film, Hollywood, Mystery Photo and tagged #mystery photo. Bookmark the permalink.