Movie theater patrons Tombio Ambo and Shigeki Kayama are in custody after Winifred J. Stephens accused them of hissing a newsreel of President Roosevelt and applauding scenes of the Pearl Harbor attack.

Stephens told police that when she turned to talk to the young men, one of them spit at her.

Tom Treanor looks at how the loss of automobiles will affect daily life — the government had just announced that no new cars would be made “for the duration” so auto plants could be converted to defense production. The Times also reported that private automobiles might be nationalized to meet war demands. 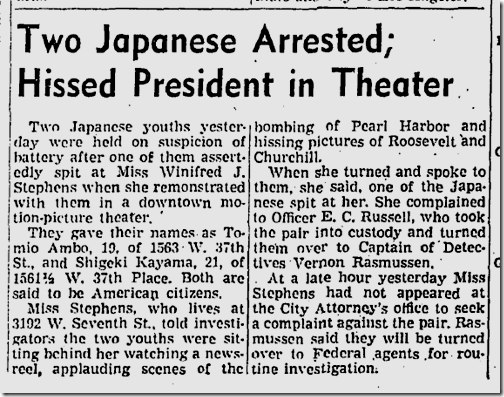 3 Responses to Japanese Americans Held After ‘Hissing Roosevelt’ in Theater