Photo: Dick Lane in 1947. The woman may be Jane Harvey, who was crowned “Queen of Television Week” in March 1947.
Credit: Steve Dichter Collection.

This is Part 4 of James Curtis’ 1975 interview with Dick Lane. In this installment, Lane discusses the early days of television in Los Angeles and Klaus Landsberg.

JAMES CURTIS: Around that period, I guess, is when you started in television.

JC: Where was that?

DL: At KTLA. At that time the call letters were W6XYZ.

JC: And that was on the Paramount lot?

DL: Yes, it was on the Paramount lot. We were in what had been a still gallery–stills for posters. And that was our studio. We went to the air for the first time on the 19th of August, 1942. Right in the middle of the war.

JC: Do you remember what you did?

DL: I was the first face ever seen on the station. In those days we had a test pattern, very experimental, our call letters, as I said, W6XYZ. We had an Indian head for the pattern. We had no grids or graphs or circles or bars, and the gradations of gray for the black and white were defined in the feathers of the headdress. The night we went on, Klaus Landsberg, who was the man who built the station, empirically fashioned it right from the ground up, would play a record and show the test pattern and he’d make a plug for “buy bonds” and we’d go C-Q, C-Q, C-Q. You know? “Cee-Que, Cee-Que, Cee-Que–W6XYZ” Hoping somebody would hear us and call in. Finally, somebody did call in. They said, “What are you?” We said, “Television.” And the fellow said, “The hell you say!” Now we got a violation the first ten seconds we were on the air. In those days you couldn’t say that!

DL: No you couldn’t say “hell.” Well, anyway, we discovered that he had a set. So Klaus Landsberg got him on the telephone and he said, “Light up your set. I’ll give you a picture.” So he helped him on the telephone through his setup so that he could get our station. “We’re at 72 to 86 megacycles.” And finally the man said, “The pattern looks good, the Indian looks good. Have you got something live I can see?” And Klaus said, “Yeah. Stand in, Dick.” So I stood in and he punched me up. And I heard the guy on the squawk. He said, “What is it?” And Klaus said, “It’s Dick Lane. The guy said: “Put the Indian back!” It was Joe Waters, a cameraman from Paramount. Well, through him we found other people who had sets, and we went around and set them up, too.

JC: How many sets were there at that time?

DL: I think we found eleven.

JC: Do you remember the first program you did for entertainment purposes?

DL: Yes, we did a Sunday night show. We were on only one hour a week when we began–on a Thursday night. One hour from eight to nine. Later, they expanded us to Sunday night from eight to nine in addition to Thursday. I did a show called “Hits and Bits.” We’d hire four vaudeville acts. And we’d make five acts out of it, because after the four acts were done we’d all get together and do what we called an “afterpiece”–a kind of an olio. And you’d be surprised the people we got: Milton Berle, Burns and Allen, Eddie Cantor…

JC: Did they get paid?

DL: Paid? Who could get paid? Nobody got paid. In those days, we had a deal with Manny, Moe, and Jack–the Pep Boys–and we’d given them one Cornell tire for each appearance.

JC: So Milton Berle came on your show for a Cornell tire.

DL: Yeah. That’s great if you ride a unicycle. And all they had were 600-16s. Or you could have your choice of a set of Evans lighters–a lady’s lighter, a man’s lighter, and a table lighter.

JC: That was before the unions got into television.

DL: No, there was no AFTRA. No union at all.

JC: Why would these people appear on the program? Just for the novelty of being on television?

DL: Oh, yes. They wanted to see how they looked on television.

JC: Did they wear makeup?

JC: What kind of makeup?

JC: Was it a different color than a natural flesh tone?

DL: Yes. In black and white television, the photo-electric cell activated by infrared light washed out all red and all pigments of red. So if your lips were red and your ears were pink, they’d go white. All red would go white; pink would go snow white. And the depth of hue in red would go to different gradations of gray up into black. So the only reason we put makeup on was to make a face all one color.

JC: What color makeup was it?

DL: 7-N. A kind of brown–no red in it. It was to cover up all the red-pink pigmentation in your skin.

JC: And that came across as natural on the screen.

JC: When was it that you could go on and not have to paint up your face like that?

DL: Well, later on we discovered, with the advent of better cameras and better tubes, better control systems, we didn’t need as much light. They used to burn us to death with light, you know. So we kept using less and less and less… We used to have 250 foot-candle in order to get a picture–250 candle-power per foot, you know. But we didn’t need it after a while, and nowadays with color you don’t need it at all. I don’t think I’ve had a makeup on in twenty years.

DL: No. I never wear makeup. 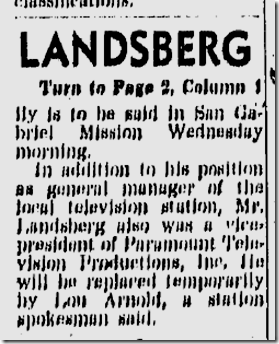 DL: Unless you’re working with a girl.

JC: Unless you’re working with a girl.

JC: How would Klaus Landsberg run a station back in those early days? Was it just this one studio? A little crackerbox arrangement?

JC: Was he essentially the station? Were there any other paid employees?

DL: Yes, there was a station here which went to the air in 1939. It was Channel Two–W2XAO. It was then the Don Lee station, and they were up on what we called Mount Lee, above the Hollywoodland sign. It’s now used as a police relay station. They had been on since 1939, experimentally, and they had acquired a list of people who owned sets. A fellow by the name of Harry Lubke was the manager of the station up there, and Klaus tried to get the list from him. But he wouldn’t even give him the list. He said, “We got ‘em–you find ‘em.” So that’s why went on that way. In those early days, it was verboten to even mention the existence of any other television station. Nobody ever mentioned the possibility that there might be another station. And to prove it, when Klaus and I went around to these people, when they’d buy a set, they’d make one. You know Transvision? They had these kits where you could make your own set–if you didn’t burn yourself to death with the soldering iron. They’d build these sets and get a tremendous antenna out there, and then we’d go out and help them get a picture… but we’d pull the plugs so that all they could get was Channel Five.

JC: Landsberg–he was a genius, wasn’t he?

DL: Yes, his ability bordered on wizardry. Nobody liked him very much. Except me; I loved the man. I knew what made him tick. His parents, you know, were thrown in a prison camp. They were Roman Catholics and that was just as bad as being a Jew in Berlin. He and some other young men ran out of the country to Paris and later went on to London. He had to find something to do. Well, since he had been twelve years old, his mother told me that he had made his own shortwave radio set. He was an electronic nut, and he hunted up a man he learned was in London, a fellow by the name of Allen B. DuMont. He told him that he was an electronic engineer, and that he wanted to work for him. Well, after talking to him, DuMont brought him to the United States! And vouched for him. And he was an absolute wizard in electronics, in particular as it applied to television.

JC: Could he be described as eccentric?

DL: No… no. He was a solid electronic engineer. I’ll tell you what he did. Allen B. DuMont introduced him to Lee DeForest, who was the father of the tube. They became fast friends, and he studied under De Forrest, who helped him work out some of his own ideas. To a point that Allen B. DuMont had Klaus, this young man, build his first station–WABD New York. Fine station, successful. They sent him up to build a station in Providence, Rhode Island, WJAR. He went from that to Boston. Built WNAC Boston. And then DuMont sent him out to Chicago to build a station for Balaban and Katz.

DL: Yeah. Well, at that time Barney Balaban was president of Paramount Pictures. Also with Balaban and Katz Theaters. And Klaus built WBBK in Chicago, which still exists. And with the success of that endeavor, Balaban said, “I want to send you out to Hollywood. I want you to build a station for me in Hollywood.” So he sent him out here, and he came out here, I think, in August, 1941. He got his requisitions in for the things he needed to build his station. Come December 7th–bingo–you can’t get a thing. Pearl Harbor, and he’s knocked out. So there he sat with egg on his face, waiting… later they relented and shipped his stuff to him. But during that time, I met him. I was on a picture with Macdonald Carey, I think, called “Dr. Broadway” at Paramount. The story of a racehorse. And I walk by this little shop one day and I see a little shingle sticking out: PARAMOUNT TELEVISION PRODUCTIONS. And I looked in and there’s a guy with a kitchen table in there, a little telephone, and a bentwood chair. And a wicker thing that said Ingoing and Outgoing Mail with nothing in either one of them. And this little guy is sitting there kind of disconsolately. I said, “What do you mean television?” He said, “This is supposed to be a television station some day.” I said, “Well, good.” And I told him about my experience with W2XII in New York, an experimental station. He said, “Well, you had lunch?” I said, “No, let’s talk about it.” So we went over and had lunch at the commissary, and he told me his whole sad tale, how he’d built these stations and now was out here stuck. During the picture, we had lunch several times, and finally when the picture was finished, I was going back over to Fox, I believe. He said, “I wish you would work for me sometime.” I said, “Well, when you get your station set, give me a ring.” Well, he called me one morning and he’s screaming and yelling, “It’s here! It’s here!” I said, “What’s here? And who are you?” He said, “I’m Klaus Landsberg and my station’s here!” Come on down!” So I went down and he had boxes. He went through this manifest thing, looking for box number so-n-so, opened it,. and it was the beginning of his transmitter. And from that moment on he built this station.

I am retired from the Los Angeles Times
View all posts by lmharnisch →
This entry was posted in 1942, Film, Hollywood, James Curtis, L.A. Voices, Obituaries, Television. Bookmark the permalink.