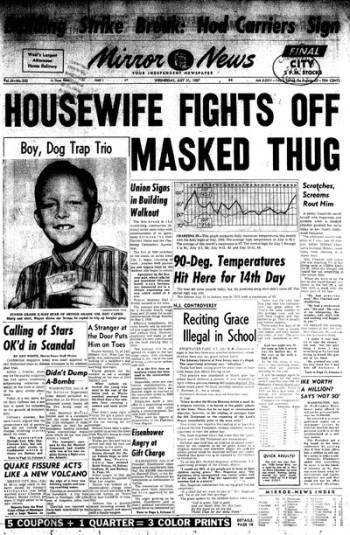 In the continuing assaults across the city, a North Hollywood housewife fought off an intruder while a 60-year-old Hollywood woman was saved from strangling by the staff of her Hollywood apartment building after she was grabbed from behind in the hallway, gagged and raped.

Mildred Chastain, 40, 11228 1/2 Emelita St.,
said she was watching TV about 1 a.m. on July 31, 1957, as she waited for her husband, Robert, to get home from his job at a liquor store. She heard scratching at the screen door and thought it was the cat trying to get in. Chastain opened the door and a masked gunman barged into the house.

“I guess I was foolish to take the chance, but the next thing I knew I was scratching at his face and trying to knock the gun out of his
hand,” she said. “He grabbed me with his free hand but I had him off
balance. I knocked him against the washing machine. Then I screamed
like crazy.”

According to the Mirror, 30 LAPD officers joined by six officers from
the Burbank Police Department made a house-to-house search for the
attacker, who had been prowling the neighborhood for two months.

In Hollywood, an unidentified woman told police she was going into her 12th-floor apartment at 1811 N. Whitley on the afternoon of July 30 when she was grabbed from behind. She said she
never got a look at the rapist who blindfolded her, tied her wrists with a silk stocking and gagged her.

Although she was tied up, the woman knocked the receiver off her telephone to summon help. The desk clerk and the janitor found her nearly dead from “a knotted garment in her mouth,” The Times said.

Police Chief William H. Parker said the Hollywood attack was like the stranglings of Marjorie Hipperson and Ruth Goldsmith.

I am retired from the Los Angeles Times
View all posts by lmharnisch →
This entry was posted in Hollywood, Hollywood Division, Homicide, LAPD, San Fernando Valley. Bookmark the permalink.