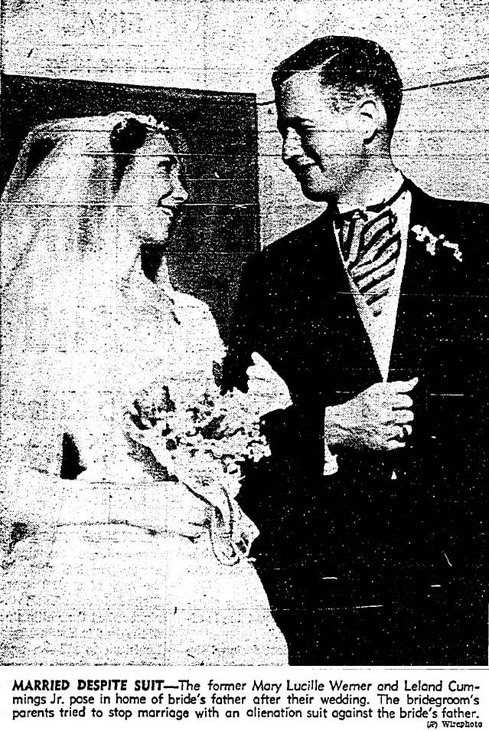 Mary and Leeland met while taking summer courses at Harvard and are so in love that they want to get married.

But while Leeland loves Mary, his parents hate her. She “shot holes through our heart,” Leeland’s mother says.

In fact, Leeland’s family hates Mary and her parents so much that they have brought a $500,000 lawsuit against them for alienating Leeland from the Catholic faith. Mary’s family, you see, are Lutherans.

Arnold J. Werner, a Milwaukee industrialist, and his wife presented Mary in a June wedding. The 165 guests at St. Matthew’s Lutheran Church did not include Leeland Cummings Sr. and his wife, who said they wouldn’t recognize the marriage “under any circumstances.”

The Cummings family of Wyncote, Pa., accused the Werners of luring Leeland away from his religion by paying his Harvard tuition and offering him a job. Leeland denied all the accusations and said his
father was trying to extort money from the Werners. Eventually, all litigation was dropped after the Werners filed a countersuit.

A rocky start to a storybook romance?

A year later, according to Time magazine, Mary filed for divorce, saying that in the month they lived together Leeland threatened her, quit his job at her father’s business and said that if she didn’t
support him, he would find someone who did.

I am retired from the Los Angeles Times
View all posts by lmharnisch →
This entry was posted in #courts, Religion and tagged 1957, divorce, Harvard, Marriage, religion. Bookmark the permalink.