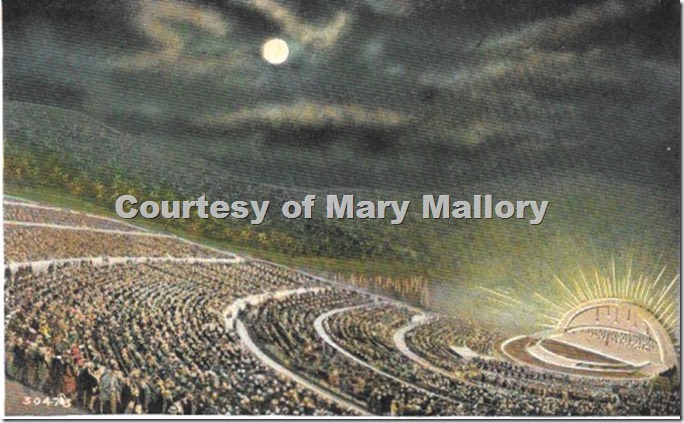 100 years ago, the Hollywood Bowl hosted its first official summer Symphonies Under the Stars concert, inaugurating a tradition that continues today. Constructed as a way to celebrate the arts in a magnificent outdoor setting, the Hollywood Bowl sprang to life thanks to the passion and inspiration of several women looking to place Hollywood as the epitome of arts and entertainment in the summer.

The idea to enjoy the arts in an outdoor setting grew out of a massive 1916 celebration for the 300th anniversary of William Shakespeare’s birth. A group of famous stage and film actors joined with the Hollywood Carnival Association to honor the Bard as well as raise money to benefit the Actors’ Fund. Colossal sets spreading over what is now the Hollywoodland entrance at Beachwood Canyon, Belden, and Westshire Drives featured hundreds of performers and major celebrities in a lavish production of Julius Caesar that drew more than 40,000 spectators to the May 18 evening performance, illuminated by massive lights donated by General Electric. The success of this magnificent production inspired others to consider building an elaborate art showplace or outdoor amphitheater in Hollywood in which to celebrate arts and culture and fashion Los Angeles as “the Athens of America.” 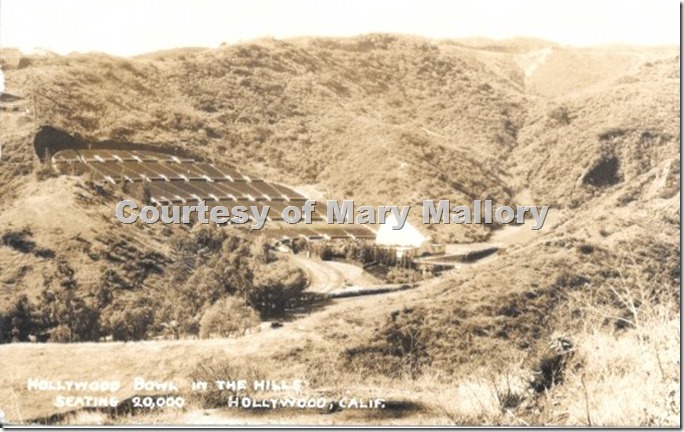 Two years later, Philadelphia doyenne Christine Wetherill Stevenson, heiress to the Pittsburgh Paint Company, traveled to Los Angeles promoting her idea of outdoor amphitheaters providing spiritual and cultural nourishment, especially in the sunny climate of California. Founder of the Philadelphia Arts Alliance, Stevenson produced an elaborate presentation of The Light of Asia on the grounds of Krotona Colony in Beachwood Canyon with the Theosophical Society as their version of the Oberammergau Passion Play. Besides inspiring the group to build an outdoor stage, she hired professional actors in New York to star in the production, to be augmented by the Brotherhood Players of the Theosophical Society. Stevenson, a strong supporter of the cultural and fine arts, intended the play to become an annual production.

Actor Walter Hampden, who played the Buddha in The Light of Asia, described the opportunity to present productions in outdoor settings to the Los Angeles Evening Express in June 1918, setting the stage for the Hollywood Bowl. “Los Angeles can easily be the mecca for many other dramatic endeavors of this nature, for in this wonderful out-of-door vista there are such tremendous opportunities to present great pageants of light and color on a big scale for you are limited only by the hills,” Hampden said. 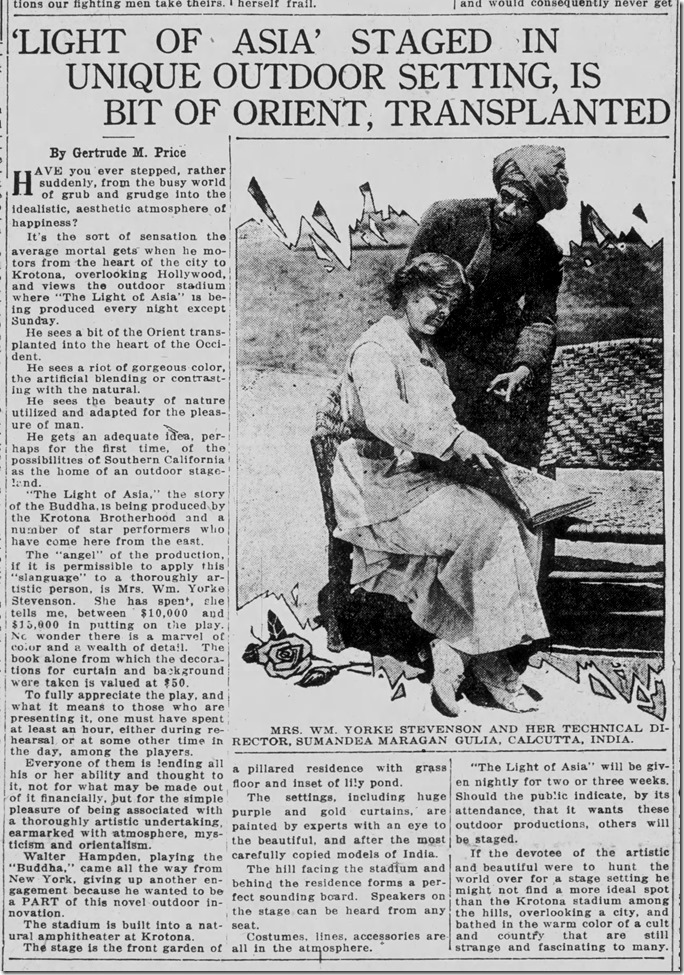 On June 14, Stevenson promoted the construction of a major Fine Arts building or amphitheater to the same newspaper. “Los Angeles is the mecca of all activities in art in the West. Here you have everything on which to build. There are hundreds of wonderful sites which command a broad view of hill and valley. There are the great possibilities for landscape architectural gardening to surround the building. There are great opportunities for unusual features in architecture.

“The climate is perfect, and will be the means of attracting many pilgrimages of creative artists to this city should there be a center for them to visit,” she said.

Several Hollywood organizations celebrated and promoted the arts at concerts during this time, including the Hollywood Community Sing, organized by society matron Artie Mason Carter in 1917. Her initiative and enthusiasm helped bring 1,000 residents together to celebrate singing and classical music in the Hollywood Community Chorus. Her future involvement would inspire the popularity of entertainment under the stars as well as assist the financial underpinnings of the Bowl organization and site.

In late summer 1918, a group led by Stevenson began meeting to develop a workable plan for constructing a magnificent open air stadium in which to celebrate spirituality and the arts, later incorporating as the Theatre Arts Alliance in May 1919. They convinced Carter to join the group, recognizing her ambition and drive would be essential in getting Hollywood residents’ support.

Many considered a 59-acre site in Bolton Canyon called the Daisy Dell, a popular picnicking location, as an appropriate site for a Hollywood showplace because it was walking distance from the commercial center and also along the Pacific Electric’s Cahuenga Pass route. William Reed and his son H. Ellis Reed scouted the location and others for the group, with the father speaking across Bolton canyon to his son and quickly realizing the wonderful acoustics. To facilitate the $47,500 purchase of the property, Stevenson and Marie Rankin Clarke each contributed $21,000, with the Theatre Arts Alliance members contributing the $5,500 required to complete the transaction.

While working to complete the construction of the Arts Alliance open-air theater, Stevenson purchased 29 acres across Cahuenga Pass to construct her own theatre and began producing the Pilgrimage Play. As plans moved slowly toward approving and building a theater, one celebrating the arts and not just spirituality, Stevenson decided to resign her post as Theatre Arts Alliance head on July 24, 1920. The group would later reimburse her $21,000 contribution to purchase the Hollywood Bowl site.

On October 25, 1920, the Community Park and Art Association was founded to construct and operate the proposed Bowl in Daisy Dell. The group began referring to their proposed theater as the Hollywood Bowl after conductor Hugo Kirchhofer’s comment on its shape. The group employed a simple wooden platform as stage and moveable wooden benches for seating for their first season.

Several presentations in 1921 demonstrated the Hollywood community’s galvanizing support for outdoor productions. An Easter sunrise service was held in March and Hollywood High School students produced Shakespeare’s Twelfth Night. In November, the association presented The Landing of the Pilgrims featuring professional actors and Native Americans, attracting 10,000 to the site, along with a Women’s Peace Concert held on November 11, Armistice Day. During that year, Daisy Dell was also employed for a variety of community events from pageants to choral programs to band concerts, with all proceeds employed to help fund the first concert season.

On July 11, 1922, the 10-week Symphonies Under the Stars officially began under the baton of conductor Alfred Hertz. To open in style, the group presented an over-the-top production of Georges Bizet’s opera Carmen with an 85-piece orchestra and 250-member chorus. California Governor William Stephens and Los Angeles Mayor George Cryer attended the opening event, with proceeds and donations helping pay for the location’s first seats. The first concert featuring the Los Angeles Philharmonic Orchestra occurred days later, as the site soon became the Philharmonic’s summer home. Artie Mason Carter’s drive was crucial during this time convincing guests to donate funds and buy subscriptions to develop a financial foundation for the site and organization. Her charm and conviction would inspire many to throw their support behind such a worthy endeavor.

In 1924, the land on which the Hollywood Bowl sits was conveyed to Los Angeles County on a 99-year lease to safeguard it for future generations, with options for another 99-year renewal. The Hollywood Bowl Association was then established as the organization to govern the theatre.

While the Hollywood Bowl has seen numerous changes and renovations since its 1922 opening, it continues to serve as the apex of outdoor cultural entertainment both in Los Angeles and across the United States. Long may it continue to reign!