Posted on November 1, 2021 by lmharnisch 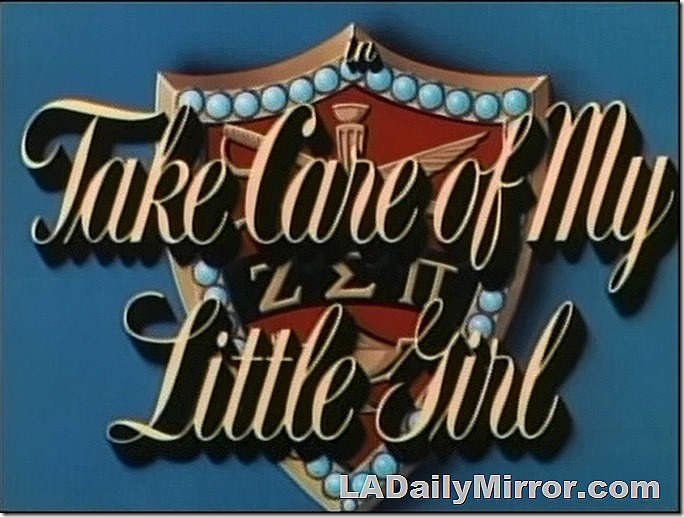 Screenplay by Julius J. and Philip G. Epstein. Based on the novel by Peggy Goodin. 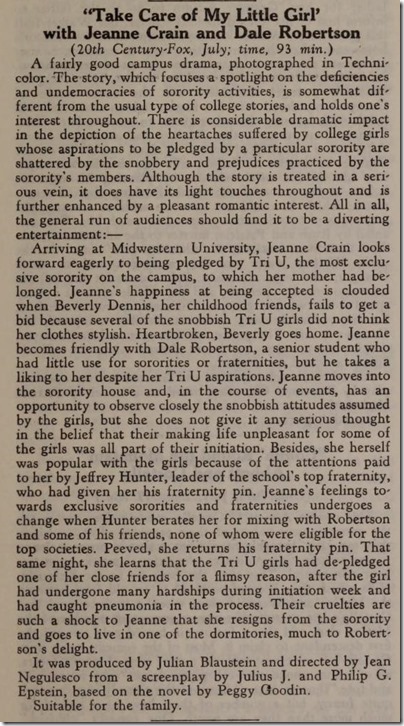 Take Care of My Little Girl is not commercially available. It aired on TCM once, in 2013.

Please note that I did not run Natalie Schafer. She’s with Mitchell Leisen, Van Johnson and Edward G. Robinson in Mystery Movie Jail for the rest of the year – if not longer.

After last week’s The Tales of Hoffmann, I dug around in the trades for another movie from that era and found Take Care of My Little Girl. Viewed in 2021, it seems quaint. The actresses are mostly too old to play college students (Jeanne Crain and Jean Peters were in their mid-20s). And Dale Robertson was in his late 20s, though he played a World War II veteran attending college. The film was controversial in the days before Animal House, but it’s pretty campy now.

For example, on Monday I ran the picture of the Jean Peters and Jeanne Crain dancing (and yes, girls dancing with girls was considered permissible at the time, as I recall from dancing school when there weren’t enough boys to go around. And NO, boys did not dance with boys. At least not at Mr. Morgan’s Dancing School). But there’s also a great scene in which a girl asks Mitzi Gaynor if she wants to dance. Gaynor’s character replies: “I don’t dance with girls, it ruins your technique.” The response is: “Well, then, do you want to wrestle?” Remind me again how the 1950s were so innocent.

More about the history of Take Care of My Little Girl is available from the AFI catalog.

And let’s see which New York Times critic hated it. I’m betting on Bosley “I hate everything” Crowther….

What? Bosley Crowther LIKED Take Care of My Little Girl?

I may have to go take a nitroglycerin pill.

While the problem of sororities and fraternities may not be the most disturbing one that is causing the college people to scratch their heads these days, it has certainly provided a company at Twentieth Century-Fox with the stuff for a brightly entertaining and frankly provocative film. Take Care of My Little Girl, the item which came to the Roxy yesterday, is sure to amuse the modern youngsters and turn a lot of sororal faces red. 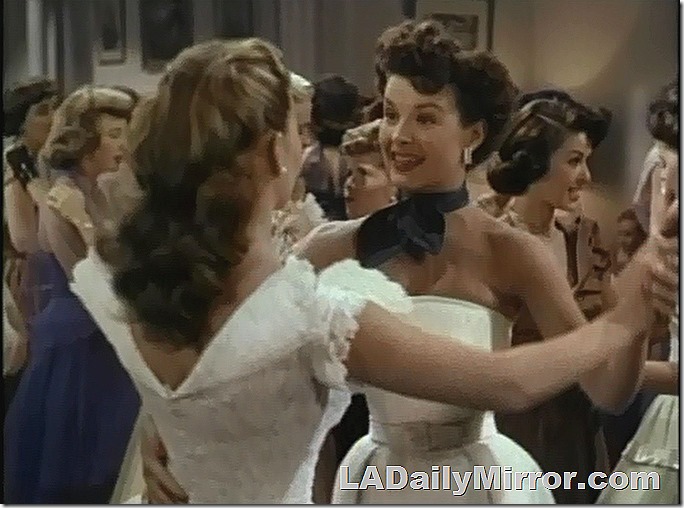 For Monday, we have a mystery woman. Also Back of the Head Woman, who will appear Friday.

Update: This is “mean girl” Jean Peters and Jeanne Crain as Back of the Head Woman. 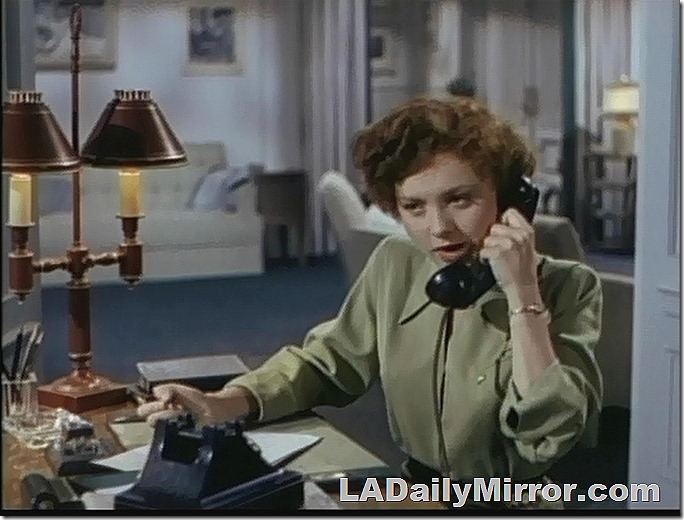 For Tuesday, we have a mystery woman. There are a lot of mystery women in this mystery movie. 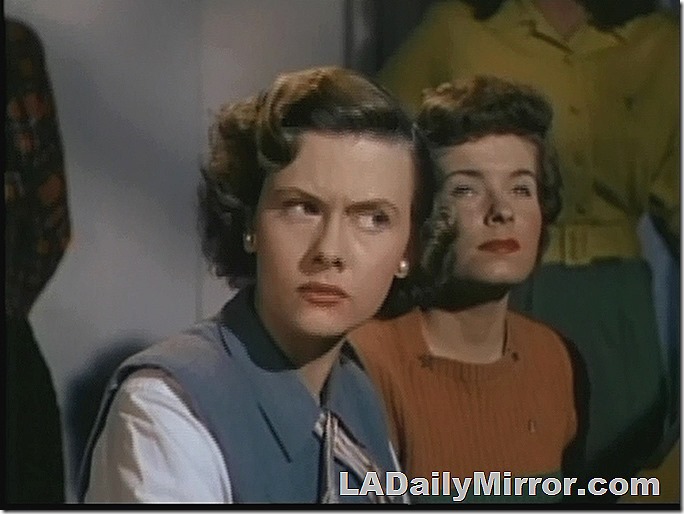 For “Hm Wednesday,” we have this mystery woman. She is unsure about such goings-on.

Update: This is Helen Westcott. 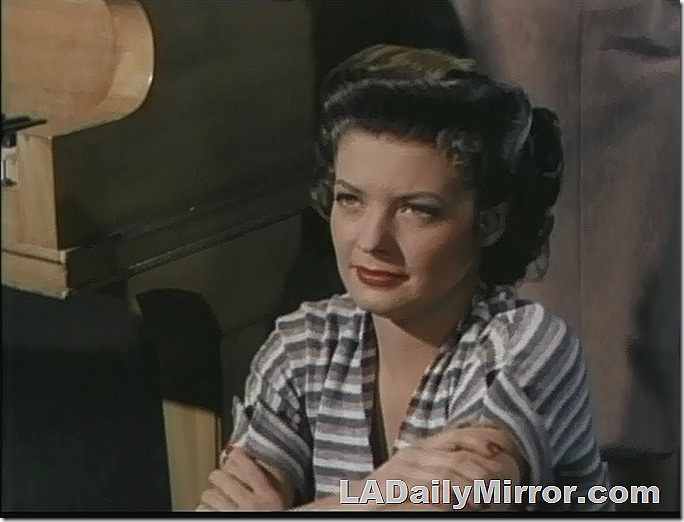 We also have these mysterious parental units.

Update: This is John Litel and Marjorie Crossland.

For “Aha Thursday,” we have a mysterious gent.

Update: This is Jeffrey Hunter.

For Friday, we have a mystery gent.

Update: This is Dale Robertson with an ancient pay phone. 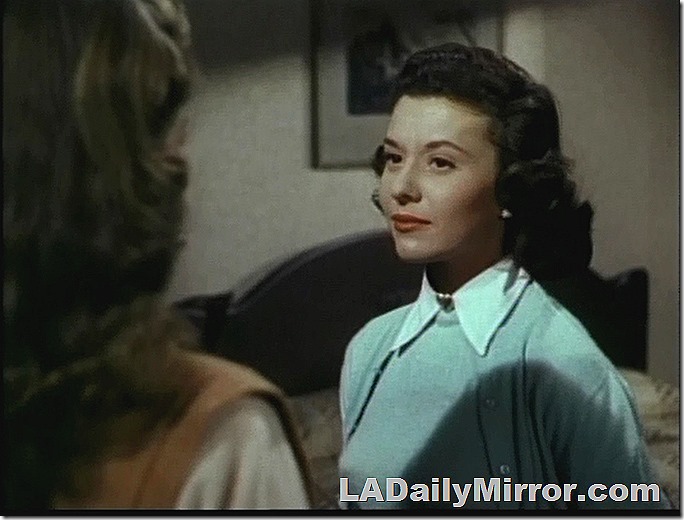 Update: This is Beverly Dennis.

Update: This is Mitzi Gaynor.

… And this mystery woman.

Update: This is Jeanne Crain.