Posted on September 6, 2021 by lmharnisch

For a short time in the 1920s, 8,000-10,000 photoplayers ruled the roost at medium-sized motion picture theaters. Basically organs with player piano rolls that allowed an operator to make all types of sound effects along with songs, photoplayers helped theater owners reduce costs by replacing their small orchestras with just one piece of equipment and one player.

One roll would play as another would be queued, and the operator could produce any manner of sound effects from items contained in and on the organ, such as percussion drums, bells, whistle, fog horn, train whistle, car horn, Indian tom toms, cymbals, etc.

Not only are they fun to listen to, but especially entertaining to watch the operator as well.  Of course, sound would quickly put photoplayers out to pasture in the early 1930s when talkies arrived, but they were very popular for about 18 years. 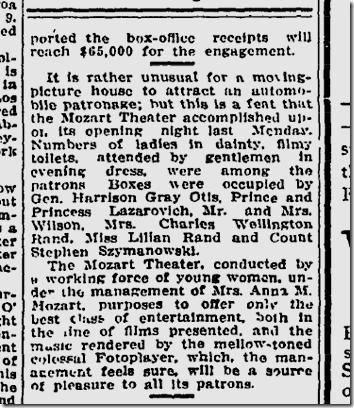 Photoplayers sprang to existence after 1910, adding a certain level of prestige and recognition to mid-size film theaters possessing them. The largest company was probably American Photo Player Co., a subsidiary of the Robert Morgan Organ Co. in Chicago, producing the Fotoplayer.  It also produced musical instruments for homes, churches and theaters.

The company began selling $2 million in stock in October 1917.  In 1923, its gross assets totaled over $2.5 million.  Possibly more than 40% of all theater organs in the United States at this time were manufactured by American Photo Player.  Besides usage in film theaters, the company also advertised their products as “vaudeville organs” in the June 17, 1921, Daily Variety.  American Photo Player Co. opened its first Los Angeles store at 787 S. Olive St, before moving to 835 S. Olive in April 1922, according to the Los Angeles Times.

Because of their high cost (in the thousands of dollars), the organs were sold on deferred payment plans.  According to a 1923 article in the Los Angeles Times, the company was backed by nearly $12 million capital to help cover the costs of installing and manufacturing the products while waiting for their payments.  Finances tumbled dramatically at the end of the 1920s when sound on film was introduced, virtually killing the product’s need overnight.

The Aug. 11, 1928, Los Angeles Times mentions that the Big Bear Grizzly Inn and Theatre were forced to put up for auction its 499-seat theater, projectors, screens, and “costly Photo Player Organ” to cover losses.  In a Long Island town, a theater owner with an organ from the Robert Morgan Opera Co. attempted to shirk his payment of over $4,800 on a $6,770 organ in September 1929 according to Daily Variety, because “sound devices had been installed in the theatre.”

According to Joe Rinaudo, who has restored a 1926 Fotoplayer from a Van Nuys manufacturer, only about 50 organs survive, with 12 in playable condition.