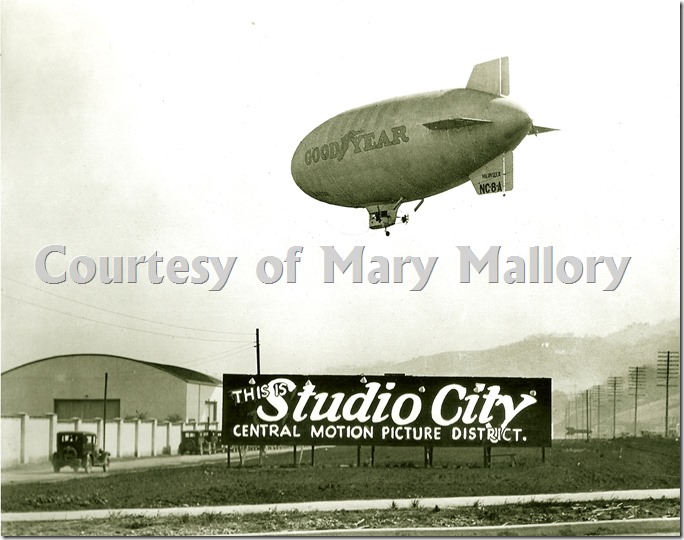 Eighty-five years ago, the Mack Sennett Studio opened at 4024 N. Radford in Studio City. The studio functioned as a magnet in hopes of drawing other film production companies and studios to the surrounding land owned by Central Motion Picture District.

The Central Motion Picture District land syndicate was conceived by Harry Merrick, formerly president of the Chicago Assn. of Commerce, now a local real estate man. Merrick helped organize Chicago’s Central Manufacturing District and recognized that the wide-open space near the Los Angeles River in North Hollywood could function in a similar fashion for the movie industry.

Financed by the Guarantee Building and Loan Assn., the syndicate acquired over 500 acres of former Lankershim Ranch land stretching from Tujunga Avenue to Pacoima Avenue (now Laurel Canyon Boulevard), Ventura Boulevard to Chandler Way in 1927, envisioning its own little city. This parcel of land would contain film studios and production facilities south of the Los Angeles River, with the land to the east and north functioning as the area in which workers of these organizations would construct their homes.

The CMPD consisted of Merrick, Gilbert H. Beesemyer, secretary/manager of the Bank, actor Noah Beery, Paramount studio executives B. P. Schulberg, Milton E. Hoffman, B. P. Fineman, Hector Turnbull, Roy Pomeroy, producer Mack Sennett, and others. Hoffman served as president, Beesemyer and Merrick served as vice presidents, with the others serving as directors and stockholders. Sennett, in his autobiography, “Father Goose,” explained that “a group of enterprising real estate operators in the San Fernando Valley… offered me a gift of 20 acres of land near the trickle known as the Los Angeles River.” The group now had its hook with which to sell the city.

Newspapers announced on June 11, 1927, that the Sennett studio of over 12 buildings would feature California Renaissance design. To make way for construction, Sennett cuties and other workers began picking fruit from 275 acres of plum, peach and apricot orchards on Aug. 28, 1927, orchards that would soon be destroyed. Later, 60 acres of walnuts, five acres of pecans, and 25 acres of grapevines would be harvested before they too were decimated.

The 1927 plans illustrated in the Los Angeles Times called for the street north of Ventura Place to be named Sennett Street, with the small street one block north of it to be called Waldron Street, after Sennett’s studio manager, J. A. Waldron. By the time construction was completed on the studio, these two byways were rechristened with the names they possess today: Hoffman Street, named for Milton E. Hoffman, and Guerin Street, named for Sennett technical and sound man Paul Guerin.

The syndicate announced major improvements and necessities that year, including constructing three public schools at Radford and Victory, North Hollywood High School on Rita Street between Radford and Colfax Avenue, and a school on Carpenter Street. Pacific Electric introduced bus service between Universal City and Studio City at Ventura Boulevard and Laurel Canyon that year, and promised to extend streetcar service to Lankershim.

The $800,000 Mack Sennett Studio completed construction in the spring of 1928, with a gala opening held March 18, 1928, concluding with the baking of the world’s largest pie. After moving equipment from the old studio, the new facility commenced its first day of filming on May 1, 1928.

Because so many drove down Ventura Boulevard viewing construction of the Sennett Studio, the United States Postal Service called the local facility the Studio City Post Office when it opened in 1928, thereby giving the city its name. In fact, the Los Angeles Times reported in July 1928, that Radford/Ventura Boulevard ranked as the third-busiest traffic intersection in Los Angeles, with 21,000 automobiles passing by on a typical Sunday.

While the CMPD hawked the successful opening of the studio, no other film companies followed suit in buying land or constructing facilities. By the summer of 1928, the syndicate officers turned their sights to the airline industry, proclaiming the area would become Los Angeles’ airline capital. They predicted construction of runways along the Los Angeles River and Pacoima and Tujunga washes, with airplane manufacturing and repair shops springing up nearby. The group also suggested decking the river from Universal City to Studio City to help in this effort, promising to donate land if the city and county followed suit.

The real estate syndicate invented all types of promotions in an effort to spur sales and construction. It announced in early 1929 newspaper advertisements that potential buyers should ask about a free trip through the Mack Sennett Studio. In April 1929, it created the Studio City Radio Hour, which ran Monday through Saturday from 5:30 pm to 6:30 pm., and Sundays from 6 p.m. to 7 p.m. on KGFJ, in a effort to boost sales. April 7, 1929, was named Movie Day, with movie stars appearing after the preview of a Sennett talkie, followed by a sightseeing trip through the studio.

The last news story ran in The Times Nov. 3, 1929, just a few days after the Wall Street crash. Sales plummeted and most syndicate members moved on. Sennett himself suffered financial hardships, entering bankruptcy in 1932.

In 1935, Mascot Films, one of the tenants at what soon became Republic Pictures, submitted 1,000 signatures to the city, petitioning that the area be renamed Mascot City. The application was denied.

I am retired from the Los Angeles Times
View all posts by lmharnisch →
This entry was posted in Uncategorized. Bookmark the permalink.
%d bloggers like this: