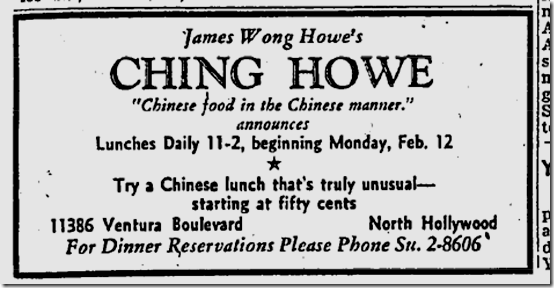 Studio City seemed to blossom into an entertainment-related town after the opening of the Mack Sennett Studios in 1928.  Many of the businesses along Ventura Boulevard catered to performers or were owned by celebrities, especially restaurants and nightclubs.

Performers enjoyed the food and the atmosphere, with such stars as Marlene Dietrich, Mickey Rooney, and William “Hopalong Cassidy” Boyd hosting parties at the site.  Actors such as Dick Powell, Van Heflin, Veronica Lake, Rosalind Russell, Tyrone Power, and Ann Sheridan often dined in the restaurant.  Daily Variety reported the closing of the restaurant on Sept. 21, 1951, which according to his nephew Don Lee, was because of Babb’s blacklisting and departure to Mexico for two years.

Catty corner across the street at 11345 Ventura Blvd., a building appears to have operated continuously as a nightclub from at least the 1940s to the present day.  During the 1940s, the business operated as Grace Hayes Lodge.  It became Larry Potter’s Supper Club in the 1950s and hosted actor Lee Marvin speaking to four Young Democrat Clubs on Dec. 11, 1959 for the Sane Nuclear Policy movement

By the early 1960s, D.J. Bob Eubanks bought the facility and ran it as a club called the Cinnamon Cinder.  It was here on Aug. 23, 1964, that the Beatles gave a secret press conference crashed by the club’s guests.  Within a couple of years it operated under the name Magic Mushroom. 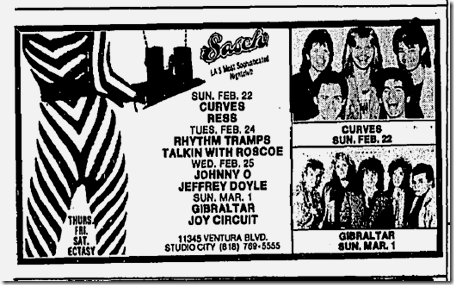 American Bandstand host Dick Clark bought the building and opened a country western nightclub called the V.I.S. Club on March 26, 1969, with singer Merle Haggard performing as the opening act.  Actor Jack Nance managed the business.  Clark described to writer Robert Hilburn in the March 28, 1969, Los Angeles Times why he wanted to open a country music nightclub.  “Country music, along with soul music, is the biggest trend in the music business today.  I’ve always liked country music.  People don’t know I was a country  music disc jockey for a while before I ever became involved with rock ‘n’ roll.”

Unfortunately, the club lasted only a few years before being replaced by a rock nightclub called Point After, which featured hot pants and sweaty bodies.  By the 1980s it was called Sasch, and played rock ‘n’ roll and rock videos.  Its name became Platinum Live sometime after 2000, hosting private parties and small music acts, before closing last year.