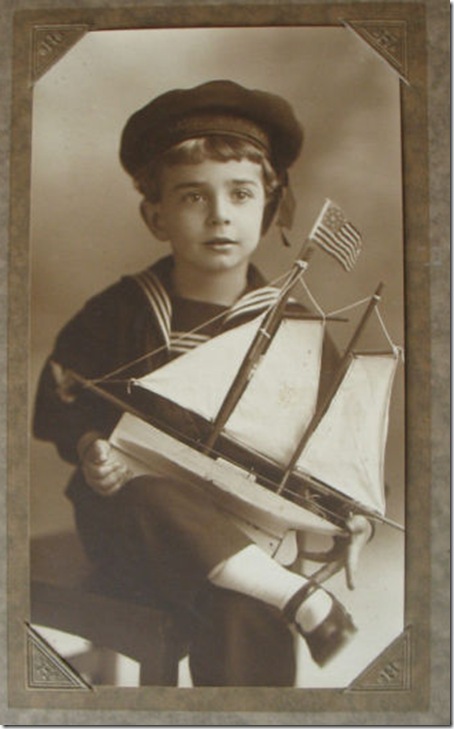 Photo: Child in sailor suit by Hartsook studios, for sale on EBay. Bidding starts at $74.95.

Patience is a prerequisite for being a stills photographer, and it is also important for those who dairy farm. Both require long waiting periods and preparation for that all important moment when the right image is shot or a dairy cow gives milk. Fred Hartsook practiced fortitude and patience as both one of the most important California photographers in the late 1910s and early 1920s and as one of the top Los Angeles area dairy cow farmers of the 1920s.

Hartsook descended from a long line of photographers. His grandfather supposedly created the first photograph mounted on a card in the United States, and his father also successfully practiced the art in the late 1800s. Hartsook entered the business in 1904, with a studio in downtown Los Angeles at 542 S. Broadway.  By 1916, he owned and operated 11 photography studios across the United States.

Hartsook soon cornered the high end market, taking shots for society balls, coming out parties, engagements, marriage announcements, and theatre performers.   His prints were supposedly more reproduced in both local, national, and foreign magazines and periodicals than any other photographer of the mid-teens.  In 1915, he and his studios photographed more than half of the United States senators and congressmen.  Hartsook employed over 300 people between all the studios at higher rates than other studios, and turned many of his profits into researching and experimenting with new discoveries in photography.  Several stills photographers started with him, before moving on to practice on their own.  The studio also offered coupons as well for those who couldn’t afford the more expensive package of platinum prints.

Hartsook also employed part of his profits to build a hotel in Humboldt County, as well as buying and breeding a large herd of Holstein cattle at his ranch in Lankershim (now North Hollywood).   He began buying property in the San Fernando Valley, Mojave Desert, and northern California in 1917 to aid his growing interest in dairy cattle.  His dairy cattle often ranked as the best in Los Angeles County, winning awards both locally and statewide, and leading all breeding concerns.  Because of his farming success, Hartsook Drive in North Hollywood was named after him.

More people were moving into the San Fernando Valley in the 1920s, and land began increasing in value.   In 1924, Hartsook sold the 113-foot corner of Hartsook Drive and Lankershim Boulevard to R. T. Burge, former Los Angeles police commissioner, for the construction of a new Dodge dealership.  Hartsook subdivided part of his ranch in 1925 to place on the market to other real estate developers.

By 1927, however, Hartsook suffered from financial problems.  In August, 1927, the $300,000 Hartsook Inn on the Redwood Highway burned down in a fire. Hartsook’s photographic chains fell into receivership in the spring of 1928.  Walter L. Voshell of Boston was named manager of the 18 Hartsook Studios on May 15, 1928.  The court believed that proper management would speed along the liquidation of frozen assets, as the studio’s assets far outweighed its liabilities.

Voshell was unable to turn declining revenues around, and the individual studios for Los Angeles, Glendale, Pasadena, Hollywood, and 14 other California cities would be auctioned off separately on June 30, 1929.

The stress of his financial problems led to declining health for Hartsook, and he passed away at the age of 55 in October 1930.