Photo: Beachwood Canyon in a panorama from the Library of Congress.

Throughout history, people have come together to communally celebrate.  From groups worshipping at Stonehenge, rejoicing in Times Square at the end of World War II, or experiencing the height of 1960s’ music at Woodstock, unique cultural experiences tend to create small moments of rapture among its participants.  Los Angeles and Hollywood experienced one such unique chapter during a massive outdoor 1916 production of “Julius Caesar” in Beachwood Canyon to celebrate William Shakespeare’s 300th birthday. 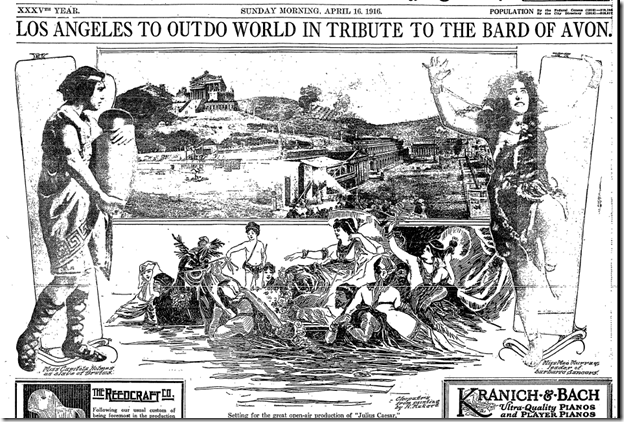 Throughout southern California that spring, towns and cities held poetry readings, pageants, and presentations of plays honoring the great wordsmith.  A group of famous theatre and film actors led by Raymond W. Wells on behalf of the Hollywood Carnival Association, planned and organized for a massive outdoor production at the top of Beachwood Drive in what is now the entrance to the Hollywoodland housing development to be held on May 19, 1916.  A cast numbering hundreds would faithfully reenact the play for the metropolis of Los Angeles.

To ensure accuracy of the sets to those of Roman times, exact preparations occurred.  Per the April 16, 1916, Los Angeles Times, photographs were taken of the surrounding hills with images of ancient Rome inserted to ensure the faithful duplication of the correct proportions.  After construction of the sets, a downtown Los Angeles photographer made a panoramic image of the bleachers and sets, sending it to the Library of Congress for historic and copyright purposes.  The far left side of the image occupies what is now Beachwood Village and the start of Belden Drive, with the far center of the photo showing what is now Mount Lee, where the Hollywood Sign is located.  The main part of the set sits in the dead center of the Hollywoodland intersection entrance.

As the paper went on to describe the construction, “Most spectacular of the many events to be offered…will be the gorgeous presentation of “Julius Caesar” in an open-air performance… . The setting will be beautiful Beachwood Canyon, at the head of Beachwood Drive.  Here a beautiful amphitheater provided by nature gives just the setting needed, even to wonderful acoustic properties. A great transformation is in progress, changing the wild foothill region to one cut through by wide Roman highways, historically correct, lined with stately columns and winding up the hills to a replica of the Roman Capitol.  An imposing reproduction of the Roman forum is being created, which will be the center of action in the play… .”

Wells planned the whole proceedings to be an event. Roman columns, scenes, and spotlights would lead patrons into the event, where costumed soldiers would take tickets before sentries would escort customers to their seats.  “A chorus of fifty barbaric dancing girls” led by Mae Murray would appear before the scenes.  Sets were imposing by size as well, with the main Roman street containing the Senate chamber at one end and Caesar’s home at the other spanning 200 feet in width and sixty feet in depth.  The orchestra pit along was eight feet wide, four feet deep, and 100 feet in length.  Bleacher, box, and chair seating for 35,000 was constructed, with extra seating on the hillsides.

It was estimated that 3000-5000 people would participate in the production, including the Hollywood High School football team as soldiers.  The supporting cast included 200 dancing girls, 150 citizenesses, fifty ladies in waiting, 200 soldiers, and 500 rabble, all rehearsing at a large three story warehouse at the intersections of Highland Avenue and Hollywood Boulevard.  The main cast featured such big stars as Theodore Roberts as Caesar, Douglas Fairbanks as Young Cato, William Farnum as Marcus Antonius, Tyrone Power as Brutus, Frank Keenan as Cassius, Gibson Gowland and Tully Marshall as Trebonius.  The April 27 Los Angeles Times reported that male cast members visited Los Angeles and Lincoln High Schools enlisting every boy over five feet ten to be soldiers in the production as well.  All participants worked for free, with all profits benefiting the Actors’ Fund of America.

Animals such as elephants and camels would be employed in the procession, and actual combat among those playing soldiers would occur on the hillsides.

Free parking would be provided at empty lots on Franklin Avenue, with customers expected to walk to the proceedings.  For the elderly and infirm, transportation to the site would be provided at a small cost.  The Los Angeles Times and Automobile Club of Southern California broadcast directions on behalf of the planning organization.  For those riding the electric cars to Gower Street and Hollywood Boulevard, or Bronson Avenue and Hollywood Boulevard, precise directions were given in walking to the site, about 3/4s of a mile away.   Streetcar operators were educated on how to give directions to riders and signs were also posted around the city.

The County Board of Supervisors appropriated $1,500 in leftover 1915 entertainment funds to the proceedings, which help constitute a receiving fund to continue annual events or help construct a new stadium or amphitheatre.  The Executive Committee organizing the production felt that the probable outcome of their proceedings would be the construction of a Greek Theater.

On May 18, “three batteries of five incandescent lights each, giving a total of 6,000,000 candle power,” would illuminate proceedings, donated by General Electric.  Other lighting set the moods or established the time of the production, and the conclusion featured twenty seven magnesium flares lit simultaneously behind the hills to illuminate the armies fighting all over the landscape as well as the actors onstage.

Approximately 40,000 people attended the $17,000, which raised over $15,000 to benefit the Actors’ Fund.  The presentation was a major success, with accolades and excitement from all who attended, calling it colossal, magnificent, stupendous.  As the May 20, 1916 Los Angeles Times stated, “It required no effort on the part of the spectators to imagine themselves in Rome, witnesses universally of the great tragedy of history.  Inspired by the realism of the setting and the absorbed attention of the great audience, the actors became for the hour, Romans, indeed, and lived their parts with every gesture and utterance.  It was more than a play.  It was production, realistic, Gargantuan.”

Reporter Henry Christeen Warnack of The Times in his story of the proceedings considered the event more a celebration of glorious California than just a play.  As he wrote, “…the people last night were thinking neither of the Shakespeare tercentenary nor of the actors’ fund.  Their presence was only another vote of confidence in the one infallible and perfect feature of existence upon this planet of a million times a million uncertainties – the climate of Southern California – and an expression of their boundless enthusiasm for anything and everything in the way of an open-air fete.”