Just in time for New Year’s, we’ll take a look at a “lost drink,” making a brief inquiry into San Francisco’s Pisco Punch, made famous by Bank Exchange saloon owner Duncan Nicol (often spelled Nichol or Nicoll), who  died in 1926 without revealing the recipe.

Feb. 15, 1921: Duncan “Pisco John” Nicol is forced out of work by Prohibition, but refuses to reveal the recipe for Pisco Punch. 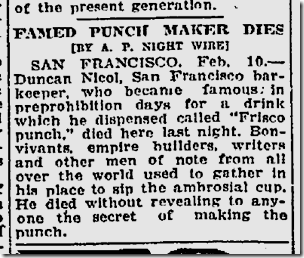 Feb. 11, 1926: The Times publishes the obituary of Duncan  Nicol, reporting that he made “Frisco Punch.” “He died without revealing to anyone the secret of making the punch,” the Associated Press story says.

Here’s some information from a regular column by G. Selmer Fougner in the New York Sun, from April 23, 1934, via FultonHistory.com:

Here’s a recipe from “The Pan Pacific Cook Book,” published in 1915 while Nicol was still alive. Notice that this one adds powdered sugar. 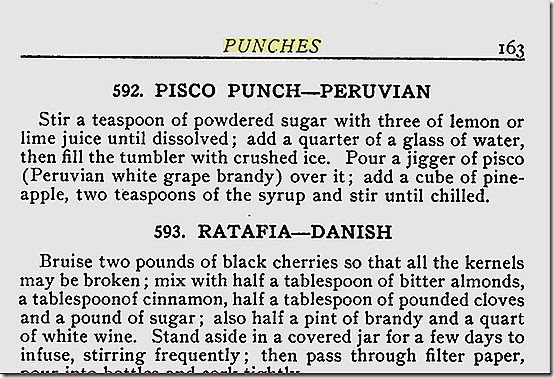 While you’re experimenting with recipes, peruse this article from the Atlantic Monthly in January 1865, Page 60, in an article titled “George Cruikshank in Mexico”  and consider the possibility that Pisco Punch was a variation on an earlier drink:

If anyone makes any of these recipes, drop us a line and let us know how they turned out!

I am retired from the Los Angeles Times
View all posts by lmharnisch →
This entry was posted in 1915, 1934, 1939, Food and Drink, San Francisco and tagged food and drink, Pisco Punch, San Francisco. Bookmark the permalink.
%d bloggers like this: