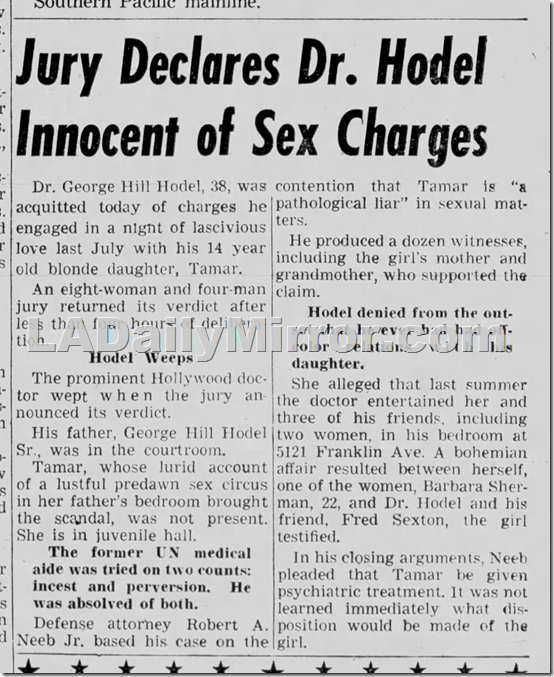 Today is the anniversary of a jury of eight women and four men finding Dr. George Hodel not guilty on two counts of molesting his daughter Tamar. I’ll have more to say about this in the days to come, but I wanted to mark the day.

On the jump, the entire exchange, which tells a different story.

Remember Jury Instructions 101: What attorneys say during a trial is not evidence. Only a witness’ testimony is evidence.

Neeb asked Tamar Hodel if she told Joe Barrett: “This house has secret passages. My father is the murderer of the Black Dahlia. My father is going to kill me and all the rest of the members of this household because he has a lust for blood. He is insane.”

Neeb’s question is not evidence, as much as Steve Hodel would like it to be.

Her reply, however IS evidence: “Tamar said she couldn’t remember any such thing.”

Again, what Neeb said isn’t evidence: “Didn’t she remember, the defense attorney persisted, telling her stepbrother Duncan Hodel and another youth in the family home last September: ‘If I’m not allowed to do what I want I’ll get even with that _____ (her father). I’m going to say that on a certain night I had sex relations with my father. I know it isn’t true, but the cops won’t.’ ”

However, this IS evidence: “The girl’s response was an indignant ‘No.’ ”