Posted on December 8, 2020 by lmharnisch 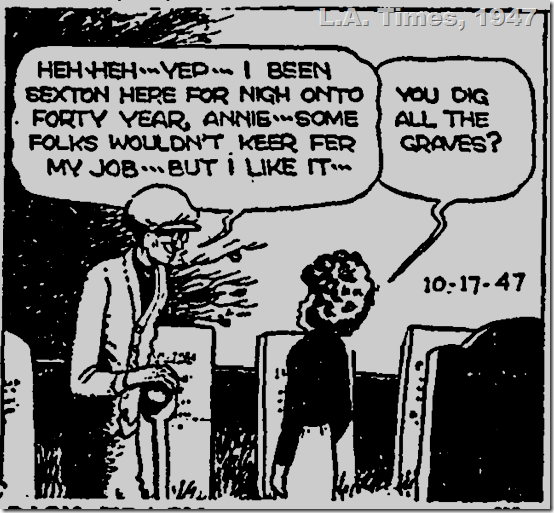 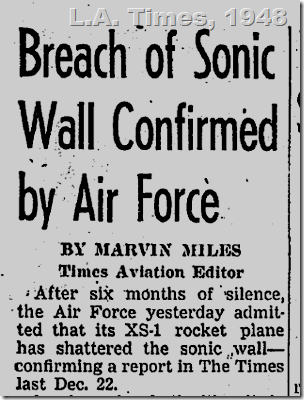 Note: This is an encore from 2005 and originally appeared on the 1947project.

Hm…. U.S. prison population up for the first time since World War II…. Lawsuits over deed restrictions in South Pasadena…. A 35-year-old merchant seaman in San Francisco is badly injured while walking down a street when he’s struck by a 67-year-old woman who committed suicide by jumping from a 10-story building….

But the story I’ve been anticipating—one of the biggest of 1947—can’t be found: Capt. Charles E. Yeager breaking the sound barrier Oct. 14, 1947. In fact Yeager’s name didn’t even appear in The Times in 1947, at least according to a Proquest search, which admittedly is less than perfect.

The Times didn’t report that Yeager had broken the sound barrier until June 1948, publishing a story by aviation correspondent Marvin Miles with this editor’s note:

The following story of supersonic flight was written last December and voluntarily withheld by The Times for almost six months in the interest of national security. Air Secretary [W. Stuart] Symington authorized its release yesterday—excluding only the actual speed reached—and expressed appreciation for this newspaper’s cooperation in protecting security.

Almost a year after it occurred, in August 1948, The Times Sunday supplement “This Week Magazine: For a Better America,” ran a cover story on Yeager, a first-person account as told to Adie Suehsdorf.

“Inside the X-1 it was pretty dark. Once the cockpit door was fastened I was sealed up like a bank vault. I couldn’t see through the canopy because it rested against a shock-absorbing pad in the belly of the B-29 [which carried the aircraft to 26,000 feet, then dropped it out the bomb bay].

“Still, I wasn’t cramped for space. I sat with my knees drawn up slightly, the wheel-type steering column between them. I fastened my crash helmet, oxygen mask and safety belt and by the time the B-29 reached 12,000 feet or so I was all set.

“I listened to the chit-chat on the intercom. Crew gabbing, mostly kidding. It seemed awfully far away.”

“At the five-minute warning, I started bringing my oxygen and fuel pressure up and turning on all the instruments which make a continuous record of the flight. A camera takes pictures of the instrument panel. Internal recorders take readings on each individual dial and gauge. A telemeter transmits a running record of these recordings to the ground. If an accident should happen, they’d know below just what was going on when the trouble hit.

“Finally, I announced: ‘I’ve checked the cockpit and I’m ready for the drop.’

“ ‘OK,’ the pilot came back. ‘There’ll be 30 seconds before drop.’ We were at 26,000 feet. I could feel the bomber lift as it rounded off at the top of its ascent.
“Now the B-29 dipped its nose and I knew we were going into the 1,000-foot dive that precedes the drop. The X-1 [at that time the XS-1] will stall if we’re not doing better than 240 mph at the time of the drop. The drone of the engines was replaced by a blasting roar as the bomber picked up speed and a whistling gale of wind swept past me in the X-1.

“The X-1 wavered in the release mechanism for maybe 2 seconds. I tensed. Why didn’t the damn thing drop? I relaxed and started to shout: ‘Why in hell doesn’t somebody do something?’ And I dropped.

“A fiery sun that seemed about 6 feet away flooded the cockpit and filled my eyes. The plane bucked and fell. The blinding moment passed and I oriented myself. I leveled the plane, reached up and turned on one of the rocket chambers. The plane came to life and surged forward into space. Even though I was braced, I felt as though I’d been hit in the rear by a truck. I turned on another chamber and it leaned me back a bit more.

“By now the B-29 was far behind me. I had regained the altitude lost by the drop and was shooting up into the sky at a 45-degree angle. I felt a great surge of exhilaration. The release makes you your own pilot and that always feels good but it was even more than that. I noticed that my sensations were heightened; I was taking in everything I saw. Registering is probably a better word. The sights and sounds and feelings were only momentary impressions to be sorted out later.
“Now as the air became thinner with altitude, the sky deepened and darkened to a rich, fathomless purple. The stars came out. Millions of them. There was no moon but the sun glowed brilliantly.
“The Mach needle had crept past 0.9. That means 90% of the speed of sound. There’s no mph speedometer in the X-1.

“It went to 0.95 and 0.98. This was as fast as I’d ever traveled. The sonic barrier was staring me in the face. Every sense strained for signs of a crackup. This was about the point at which De Havilland, the British flier, [Geoffrey de Havilland Jr., Sept. 27, 1946] and his plane exploded in a million pieces. I remember thinking ‘If it’s going to happen, it’s going to happen quick.’

“The needle slid up to 1.0 and went over. I should like to say that I broke into a happy smile and the band played ‘Dixie,’ but the fact is I was so tense I hardly realized I’d reached the goal.

“It took 7½ minutes to come down. I glided at 300 and 400 mph, rolling and doing wingovers for fun. I left the darkness and the stars, came down below the haze level, into the blue. I saw a heavily timbered mountain and thought it looked good for hunting, thought maybe it had a hidden lake where the fishing would be good.

“I thought that’s where I want to end up. Hunting and fishing. Lake Tahoe area. I’ll give myself four or five more years of this kind of flying. When the 20/13 vision goes I’ll get an Air Force desk till it’s time to go to Tahoe.”

Bonus factoid: Yeager didn’t tell his wife ahead of time that he would attempt to make this historic flight.


Quote of the day: Contrary to popular belief, the majority of college youngsters are not frequent and heavy drinkers but are as moderate and temperate as the homes and social backgrounds they come from.
A College Report: Drinking and Sex Conduct by Adie Suehsdorf, Sept. 27, 1953.

I am retired from the Los Angeles Times
View all posts by lmharnisch →
This entry was posted in 1947, Aviation and tagged 1947, Aviation, Chuck Yeager, Marvin Miles, sound barrier. Bookmark the permalink.