Posted on December 2, 2020 by lmharnisch 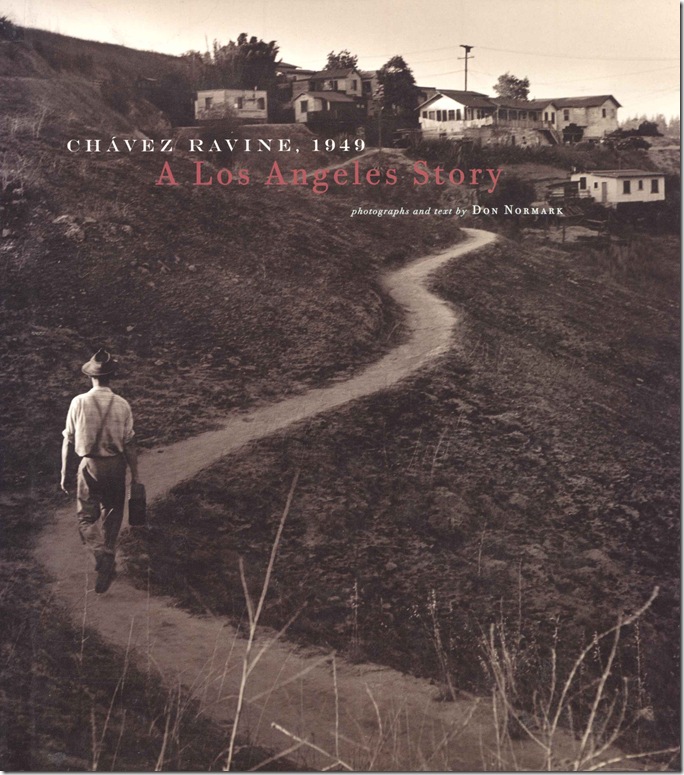 You might have to hunt a bit for Don Normark’s 1999 book “Chavez Ravine, 1949,” but your search will be rewarded. The photos are terrific and the residents’ recollections make the book even better. Copies can be found via bookfinder.com.

ps. I should note that a recent story by longtime Los Angeles Times writer Louis Sahagun erred in stating:

Louis is a veteran reporter and has written a book about Los Angeles history, a biography of Manly Palmer Hall, so I’m a bit surprised at this flub. But this is folklore. And it’s the way James Ellroy presents the story of Chavez Ravine in “White Jazz.”

To grossly simplify: Latino families were indeed evicted from Chavez Ravine (see Paul Coates’ column on the the Arechiga family). But it was for a large public housing project (you know, for all those folks being evicted from Bunker Hill because urban renewal). The project was abandoned when it became a political pinata during the Red Scare after World War II. Because public housing = socialism and communism, obviously.

In a June 3, 1958, election, Los Angeles voters approved Proposition B (Ordinance 110201), which specified that the Dodgers would build their own stadium in Chavez Ravine. In return, the city received the title to Wrigley Field at 42nd Place and Avalon Boulevard. Wrigley Field was demolished in 1969 and is the site of Gilbert Lindsay Recreation Center.

There were numerous plans in the 1950s for the vacant land in Chavez Ravine. One possibility was building a zoo. Also a cemetery (I’ll leave the jokes to others).