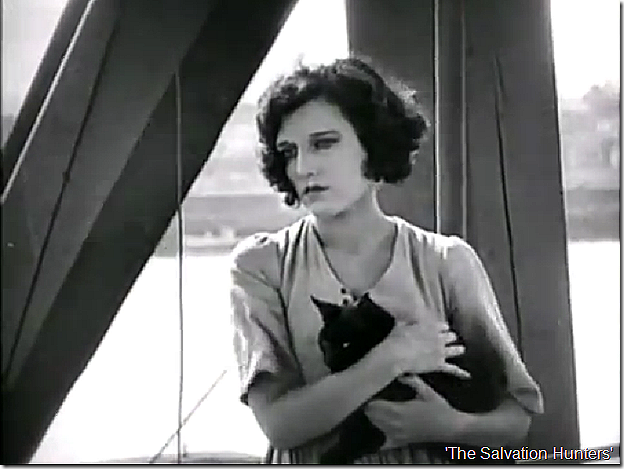 Georgia Hale is The Girl in “The Salvation Hunters.”

From the very beginning of his career, director Josef von Sternberg possessed an extraordinary vision for the art, look, and feel of his films. They were as much or more about design and and art than about story or character. Nowhere is this more true than in his very first film, “The Salvation Hunters.” Shot on a shoestring budget, the motion picture revealed the discriminating pictorial eye and talent of this young man.

Von Sternberg, actually born Jonas Sternberg in Vienna, Austria, immigrated to America with his family in 1901, at the age of 7. The family remained for a few years before returning to Austria, before traveling back to the United States in 1908. He attended school sporadically and held a series of menial jobs, eventually landing at World Film Corporation. He served in the Signal Corps in World War I, before returning to World Film and then traveling to Europe to study and work in film after the war. von Sternberg arrived in Hollywood in 1923 and worked as assistant director on a few films.

Several stories exist for how “The Salvation Hunters” came to exist. Variety claims in a October 15, 1924, story, that George K. Arthur met von Sternberg, who mentioned that he had a screenplay available for filming. “Between them they were able to raise $4,000 and then proceeded to make the picture at San Pedro Harbor.” Most everyone worked for little cash, but actor Stuart Holmes was paid $100 for his one day of work. von Sternberg, however, claims in his autobiography “Fun in a Chinese Laundry,” that Arthur approached him with a script he had written called “Just Plain Bugs,” which he hoped that the director could organize for filming with the $6,000 in cash Arthur possessed. von Sternberg suggested that Arthur throw away the script and start again with something else; the director proceeded to write a new script for free under the $500 fee already paid him, which dealt with three young people searching for hope in the modern world. von Sternberg also claimed in the book that Arthur approached him during filming and weepily admitted that he had found a bank book and written the $6,000 figure in it, though he had no money, with the director assuring him that they could raise the money.

Holmes was the big name in the cast, followed by Arthur.  Von Sternberg hired an unknown dancer/actress by the name of Georgia Hale to play the female lead.  He then approached a dredge boat operator in San Pedro who agreed to allow him to film on the boat.   With so small a budget, the production employed real locations as sets, and stole many of their shots without obtaining permission or paying fees.  The entire shoot lasted 3 1/2 weeks, with the final cost totaling around $4,900.  The plot concerned three woe-begotten characters named The Boy, The Girl and The Kid living in squalor, and their attempt to find a better life.  The film represented the psychological and mental thought processes of the characters, and one of Sternberg’s opening title cards stated his aim was “…to photograph a Thought.”  In effect, this was one of the first art house films, made not so much to entertain as to cause viewers to think.

In mid-September 1924, the film screened at the Roosevelt, a preview house on Vermont Avenue per Variety, with a tepid response.  They aimed to take it to the Writers’ Club for a screening, but Arthur contrived a way to get Charlie Chaplin to screen it.  Von Sternberg claims in his book that Arthur befriended Chaplin’s Japanese manservant, Kono, paying him a small fee to include it among motion pictures to be screened for Chaplin at the actor’s home.  After Chaplin viewed one reel, he demanded to see more, which conveniently happened to be included.  Chaplin loved the film so much he took it straight over for Douglas Fairbanks to see, and the film quickly became a cause celebre. 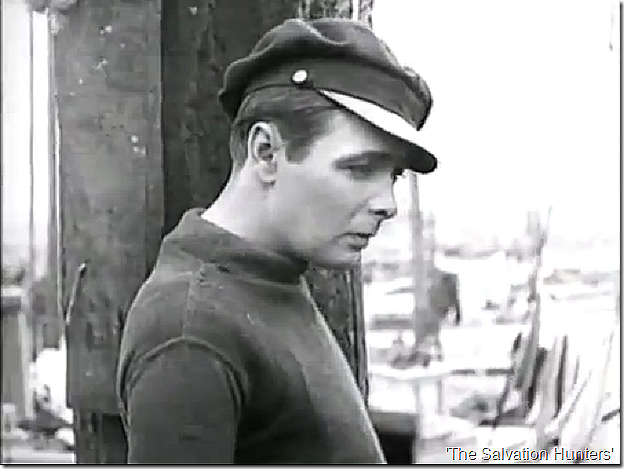 George K. Arthur as The Boy.

The film’s visual style impressed Mary Pickford so much that she hired von Sternberg to write and direct for her in mid-October 1924, telling the October 17 Los Angeles Times that, “I believe that Mr. Von Sternberg has the precious qualities of freshness and originality for which we have long been seeking.  He is a master technician and has a feeling for drama possessed by few.”  The unidentified author of the story even calls the director  “the Eugene O’Neill of the films.”  von Sternberg planned to make an original picture starring Pickford called “The Back-Wash,” one focusing on a blind girl in a Pennsylvania mining town as she and others “struggle for betterment.”  Pickford told the January 18, 1925 Los Angeles Times that she was having difficulty in convincing von Sternberg that her films couldn’t be as heavy as “The Salvation Hunters.”  As she told the paper, “He’s so  young.  He sees life through dark glasses.  But he is a very great man.  I insist that the blind girl must have humor and light.  Otherwise she would appear a martyr.  Even the most drab, self-sacrificing life has sunshine somewhere, if one can only see it.”  After much discussion, the plans were shelved.

“The Salvation Hunters” polarized audiences.  Many loved it for its artistic look and thoughtful story, while others found it boring and pretentious.  The November 26 Los Angeles Times review states “…this picture, more than any other possibly during this season, will attract the interest of those who have reliance in the artistic development of cinema productions.  It brings to light that cost has nothing to do with the quality of the achievement, and that the struggle for self-expression can triumph over more material consideration in the films even as in other art forms.  The inspiration is what is needed, and that apparently is what Josef von Sternberg, an absolutely unknown director, had when he gave the theme and the story such a remarkable and effective treatment as it receives in his very telling screen feature…”The Salvation Hunters” sounds a new note that is, at the same time, an old note in picture making.  It gets back to the primal consideration that pictures must be pictures and that ideas can best be expressed most effectively in symbols to which a special significance has been given through the way they are introduced to the view.”  As the review goes on to point out, the story is about impressions and thoughts expressed vividly.

Chaplin promoted the film in a statement quoted in the January 18, 1925, New York Times.  “It gives me great pleasure to recommend “The Salvation Hunters” to motion-picture lovers.  To me it revealed a spontaneous and admirable example of film technique, combined with an artistic expression of composition and rhythm in presentation.  It is a great picture–and different.”

“Mordaunt Hall negatively reviewed the film in the February 2 New York Times.  “This is an effort thought to be art because it is simple.  It turns about to be a fair study with amateurish direction in many spots, and is quite dubious as an entertainment.” “Daily Variety” trashed the film in its February 4 review.  “The Salvation Hunters” is nothing more nor less than another short cast picture to express an apparently Teutonic theory of fatalism.  The derelicts of the world are the characters and a flock of freshman philosophy the theme…There’s nothing lavish in this one, and although it isn’t entirely a bad picture, it is uninteresting most of the way because of some glaring directorial faults and also because of the illogical story.”

The picture failed at the box office in some places, which caused some reviewers to react with glee.  Helen Klumph stated in her February 8 Los Angeles Times story that “The picture seems to me self-consciously “arty.” Instead of unfolding a story simply it appears that Von Sternberg is always there pounding home, with sledge hammer strokes the fact that he is different.  One wishes that he hadn’t tried as hard.” 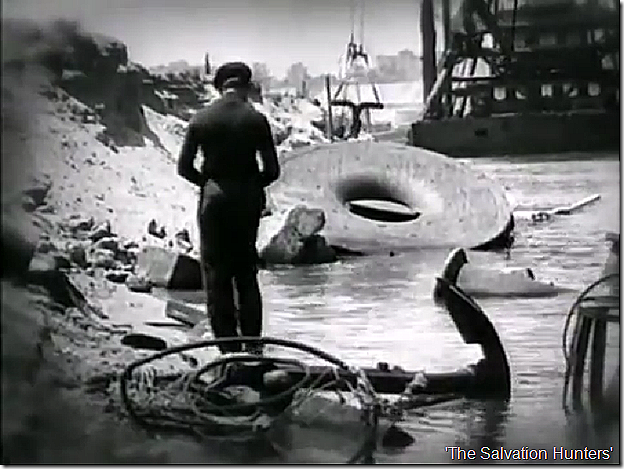 Von Sternberg claimed in 1927 newspaper articles that the film was successful in London, Los Angeles, and San Francisco, but flopped in New York and Chicago.  Because it cost so little money to make, it was a big financial success.

Chaplin even brought in the director to shoot the film “The Woman of the Sea” starring himself and Edna Purviance.  While von Sternberg considered the film artistic and powerful, Chaplin refused to distribute it, partly because of his divorce with Lita Chaplin and partly for artistic reasons.

Paramount hired von Sternberg to direct the film “Underworld” after his work on a few MGM films.  As Paramount executive B. P. Schulberg told the January 6, 1927, Los Angeles Times, “Von Sternberg has a unique genius for which there is a distinct place in motion pictures.  As director of photography he stands alone.  He is the supreme master of symbolism and his sense of composition is so extraordinary as to be overwhelming in its results.  He paints with a camera as Ben Hecht writes, with a vivid, compelling power.  In “Underworld” he will have opportunities for picturing the lights and shades of life such as have rarely been accorded a director.”

“Salvation Hunters” met an almost similar fate as “The Woman of the Sea” after its original release.  The film languished in the UCLA Archives for years before it was screened in the spring of 2011.  I found the film beautiful and an extraordinary vision for the first work of so young a man, even if a tad long and slightly self conscious and pretentious.  “Salvation Hunters” perfectly encapsulates von Sternberg’s directing career, a troubled film shoot that results in an artistic, gloriously hypnotic vision of a troubled society.

I am retired from the Los Angeles Times
View all posts by lmharnisch →
This entry was posted in 1924, 1925, Film, Hollywood, Hollywood Heights, Mary Mallory and tagged #history, film, hollywood, Mary Mallory. Bookmark the permalink.