Classic Hollywood studio films employed actors with striking faces and mannerisms as recognizable character types from the 1930s to the 1960s, giving a shorthand to understanding the story as well as a way to add color and spice to films. One of Hollywood’s most outstanding conniving villains during this period was Canadian Douglass Rupert Dumbrille, an often unctuous, forceful presence. Whether attempting to manipulate politics, business deals or romantic relationships, Dumbrille was plotting his rise at the expense of others, usually earning his comeuppance in the end.

Born in Hamilton, Ontario, Canada, on Oct. 13, 1889, Dumbrille married his wife, Jessie, on Jan. 21, 1911, and worked in a bank, dreaming of a life on the stage. The family entered the United States in 1913, with his younger son Douglas born in Cleveland in 1914. Dumbrille worked in a variety of stock companies and theatrical productions supporting himself and his family.

Washington Evening Star, June 26, 192, via the Library of Congress.

Variety first notes Dumbrille (called Douglas Dumbrill) in a New York production of Edgar Allan Woolf’s playlet by the Florence Rockwell Company, “The Jolt,” set in the interior of a cabin in the Canadian woods during a howling blizzard. The wife feels lonely and frustrated as her doctor husband experiments with animals, and she contemplates an affair with an actor she meets, only to get a jolt of what her marriage means. The review stated, “Dumbrill is acceptable as the husband, with a tendency at times to be stagy with his talk.”

Patriotic and forceful, Dumbrille registered in Fairfield, Conn., to serve in World War I even though he was older than 35 and a foreign alien. He listed a stock company as his employer and noted he was married with two children. There is no record to show that he actually served, however.

Dumbrille traveled from state to state, taking roles during the teens and early 1920s as he worked to better his craft and support his family. In November 1917, the New York Clipper notes Dumbrille starring in “The Silent Witness” in Lowell, Mass. Variety announced in March 1918 that he had been signed by Chicago’s Wilson Avenue Theatre along with Olive Templeton to play leads during their summer season.

As early as 1919, Dumbrille seems to land villainous roles. A May 1919 issue of Variety reports that he starred in a Baltimore production of “The Confession of a War Bride,” in which he played an army officer forcing a 17-year-old girl into disgrace.

The popular Dumbrille earned good reviews during his performances with Edna May Oliver and others in the Garrick Players of Washington, D. C., in summer 1921, along with some nice background on how he entered the stage, all thanks to his strong stage voice. The June 26, 1921, edition of the Washington Herald noted this in a story about the actor. “A clear, resonant voice that can be heard clearly and distinctly in every nook and corner of the largest theater, is the very essence of Mr. Dumbrille’s stage success. From early childhood Mr. Dumbrille has had voice culture. Some of the best teachers in this country and Europe were engaged, with the result that when just a youth Mr. Dumbrille blossomed forth with a powerful yet pleasing baritone voice. This fact led him first to the church choir, where he sang in his hometown until the call of the footlights brought him to the theatrical center, New York.

It was this very voice that gained him his first engagement, and that was with a popular musical comedy. One day a well-known play producer planned to use this voice in a dramatic work. After a successful tryout it was soon discovered that Mr. Dumbrille had a clear power of expression that made his work in serious roles more artistic.”

The Garrick Players also performed in a production of the one-act play, “The Penalty,” on July 17, 1921, presented by Oliver Hoyem, executive secretary of the Washington Bureau of the National Committee of Prisons and Prison Labor as an argument in favor of abolishing the death penalty in the District of Columbia. Hoyem invited members of Congress, the Cabinet and District of Columbia officials to see the play in an open forum to help them understand the issue. All players donated their services, with director John Ravold essaying the role of the warden, and joined by Dumbrille, Robert Brister, John Kline, J. Arthur Young, Addison Smith, Theodore Hardy, and Shirley DeMe. This was an attempt to follow the world’s scientific handling of criminals rather than that of the U.S. system’s use of brutal revenge.

By 1924, Dumbrille was performing on Broadway, playing Banquo in a production of “Macbeth.” He played with Eva La Gallienne in a Dudley Digges’ production of “The Call of Life” in 1925, portrayed Michael in Sigmund Romberg’s operetta, “Princess Flavia” that year, sang the role of Athos in a musical production of “The Three Musketeers” in 1928, and played the title role in “Chinese O’Neill” in 1929. In the early 1930s, he appeared in “Joseph” as the Pharaoh, the musical “Princess Charming,” the play “As You Desire Me” with Judith Anderson and “Child of Manhattan,” written by Preston Sturges. 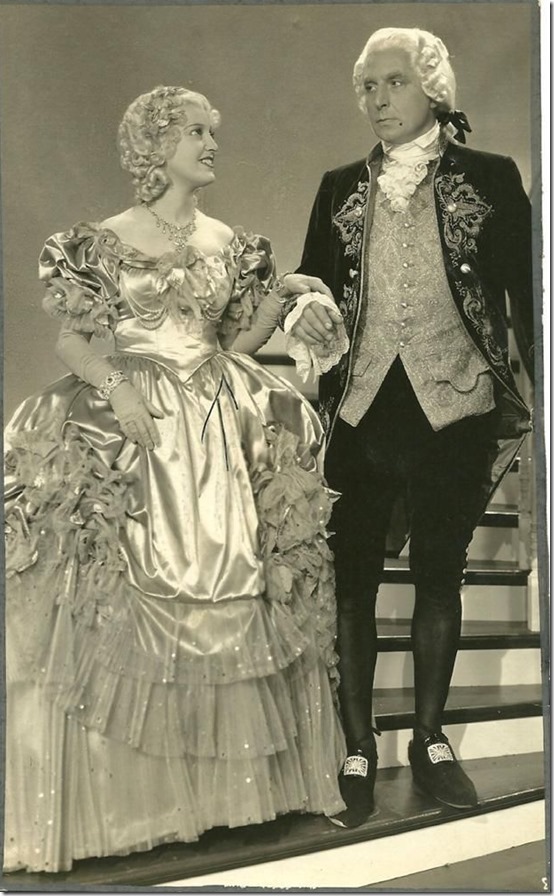 Douglass Dumbrille and Jeannette MacDonald in “Naughty Marietta” in an image listed on EBay for $5.20.

The very features that helped launch his film career — his smooth, resonant voice and forceful presence — also unfortunately typecast him as oily, slick connivers in films. Dumbrille focused on his film career beginning in the early 1930s, with the Dec. 20, 1931, Film Daily stating that he and other stage veterans were added to the cast of “The Wiser Sex,” in which he played the role of the Wop. In 1932, he appeared in the Vitaphone short,“If I’m Elected” with Ray Collins and Chester Clute, called a “timely comedy” about a candidate giving a campaign speech promising the moon, with cut-ins showing the items promised. One by one, the crowd peals away, with only one man left, his opponent.

During those first couple of years, he played in major films such as “I Am a Fugitive From a Chain Gang,” “Blondie of the Follies,” “Elmer the Great” and “Heroes For Sale,” often as lawyers or other supposedly upstanding citizens. In the 1933 film, “Laughter in Hell,” Hollywood Filmograph noted that Dumbrille and Arthur Vinton “play a pair of old meanies who will make shivers run up and down your spine… .” The 1934 Los Angeles Times review of “Treasure Island” called Dumbrille “… most villainous of villains” for his role in the film.

Dumbrille landed an outstanding character part in the Barbara Stanwyck Pre-Code, “Baby Face,” playing one of her “love slaves,” a beady-eyed, miscreant executive named Brody. Hollywood recognized his skill in giving dimension to slimy “heavies,” and most of the roles he landed focused on dastardly, shifty slicksters plotting some unfortunate scheme.

The April 7, 1935, Los Angeles Times featured a story detailing busy character actors, noting that Dumbille essayed 15 roles that year. William Perlberg, Columbia’s casting director, spoke about outstanding character actors. “Of all the classifications, the suave villain is in the greatest demand. The public now scorns the brute he-man “heavy” and asks for the smiling man with a heart of stone.” He called Dumbrille one of the leaders of this field, a fine picture stealer.

In 1937, Silver Screen published a story called “Villains,” putting Dumbrille at the top of the list. “The ace of today’s heavies is Douglass Dumbrille, best known for his Mohammed Khan of “The Lives of a Bengal Lancer” and the unscrupulous lawyer in “Mr. Deeds Goes to Town.” His arrogant profile and fine voice are perfect equipment for villainy. He gives his nicely differentiated performances exactly the correct blend of suavity and brutality… .” 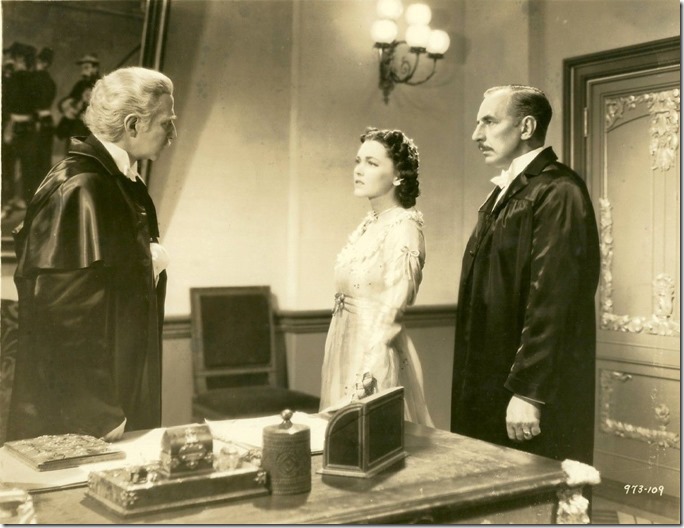 Douglass Dumbrille with Maureen O’Sullivan in “The Emperor’s Candlesticks,” in a photo listed on EBay at $2.80.

Dumbrille finally decided to become a naturalized citizen of the United States, applying Sept. 17, 1937 in Beverly Hills, where he lived at 509 N. Rodeo Drive. He received his official status in 1940.

By the 1950s, Dumbille focused more on television, appearing as a regular on such TV series as “Life of Riley,” “Crossroads,” and “The George Burns and Gracie Allen Show.” Though he occasionally landed nice character parts in such films as “The Ten Commandments,” Dumbrille mainly worked as a Beverly Hills real estate agent in the 1960s. In 1962, Dumbrille was one of 10 actors to play in the second series of 10-minute shorts promoting the benefits of Social Security to the public. 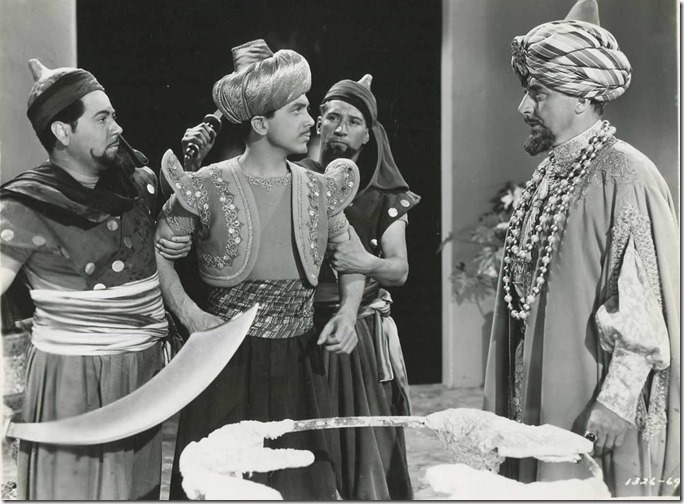 Two years after his first wife, Jessie, passed away, 70-year-old Dumbrille married 28-year-old Patricia Mowbray, daughter of the actor Alan Mowbray. Even with the difference in ages, the couple remained happily married until his death.

Dumbrille received one last hurrah in July 1965, when the unveiling of a theater/restaurant above Squaw Valley featured the Douglass Dumbrille Film Festival. The festival highlighted great character actors who gave memorable performances in films, even if their names were often forgotten, such as Franklin Pangborn, Donald Meek and Henry Armetta.

On April 2, 1974, Dumbrille passed away of a heart attack at the Motion Picture Country Home in Woodland Hills at the age of 84. Even today, when many might not know his name, viewers still recognize the rascally smarmy élan Dumbrille gave his characters.