For more than a month, most of the world has lived in a state of suspended animation as we all deal with the effects of COVID-19. Many are not following guidelines or procedures, griping about the situation, etc., seeming to forget that their grandparents or great-grandparents dealt with the exact same things during the 1918-1919 global flu pandemic which killed more than 50 million people worldwide. They had no vaccines, specialized medicine, or procedures for dealing with such things.

The world then as now found itself quarantined and forced to follow rules and procedures trying to halt the spread of the disease and save lives. Movie theatres in particular seemed to feel the brunt of the situation in 1918, but perhaps it is good to be reminded of how people endured them to show that we can survive now. 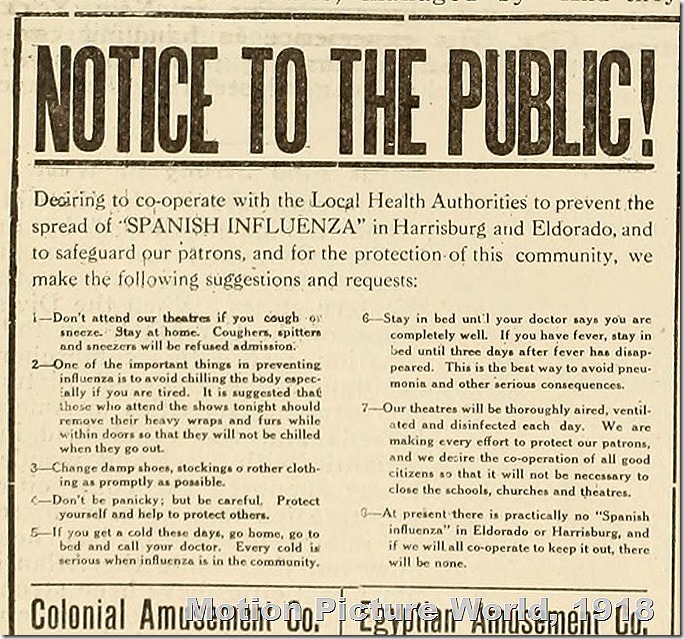 Long before the influenza pandemic hit in the fall of 1918, many around the country experienced other small epidemics in the previous few years. Carlisle, Ind., suffered a diphtheria epidemic in November 1915, forcing the shutdown of businesses. Areas outside Dallas strained under a scarlet fever epidemic at the end of the year. Omaha and surrounding communities endured a scarlet fever epidemic in March 1916. Lancaster, Pa., experienced a measles epidemic in April, 1916, forcing the closure of theaters and other large venues.

During the summer and fall of 1916, a polio epidemic broke out in New York, expanding to New Jersey, Pennsylvania, Baltimore, forcing quarantines. The disease mostly affected children younger than 5 and cities enacted rules forbidding children younger than 12 to visit theaters and other large venues. Some even forbid children from other states to enter their borders. After a few months, the illness disappeared.

Several epidemics also occurred early in 1918, long before the terrible flu pandemic, all undergoing quarantines. Several military camps experienced different epidemics of measles and smallpox at the beginning of the year. Areas of South and North Carolina suffered a meningitis epidemic in January. Charlotte, N.C., and surrounding areas experienced a measles epidemic in February. Oregon and Indiana endured a measles scare and epidemic that summer. Small towns in Michigan suffered a smallpox epidemic that spring, and areas of Iowa suffered from small pox as well.

In March 1918, the first reports of a flu-like illness at United States military camps appear, with the first influenza mention published in a April 5 health report. Soldiers traveling across the United States helped spread the disease throughout the nation.  As soldiers begin returning to America in the fall, influenza outbreaks occurred at camps outside Boston in September. The second wave of cases spread like wildfire across the United States and caused the largest number of deaths, 200,000 alone in October.

Worried with the war effort and with military doctors and nurses spread thin in the United States since many were overseas, the federal government left disease control to states and local governments. Many at first denigrated the disease, considering it no worse than the typical flu, suggesting that mere good hygiene and staying away from sick people would suffice.

Movie theaters, recreation centers, and other large venues suffered the most; some stayed open in certain cities but were required to do thorough disinfecting while others were shut down to halt the spread of the disease, easily transmitted by sneezing and coughing. Motion picture studios shut down for a month. Department stores remained open; Bon Marche in Seattle took out ads in the newspaper mentioning it would provide masks for shoppers who came without them for 5 cents.

Owners of the Rialto Theater in Butte, Mont., prominently mentioned in a Nov. 2,1918, Moving Picture World ad they were happy to close “for good of all.” Motion picture production companies shut down for a month. Quarantines began in cities, some for as little as two to three weeks, others like Salt Lake City for nine weeks. To lessen their financial hits during the closing, many motion picture theater managers, projectionists, and even organists were required to take pay cuts in certain areas of the country. 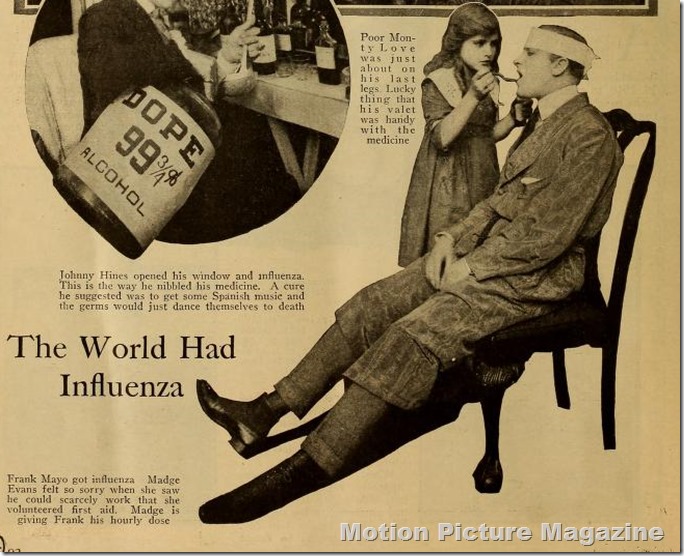 Each state and even sometimes cities devised their own rules, most ending up with the same procedures. The Los Angeles Herald printed city guidelines in its Oct., 1918, issue, prominently mentioning rules such as social distancing, washing hands, cleaning, and hygiene. Like most cities and state boards of health, they required wearing gauze masks, with store employees and service people required to wear them when at work. Companies mass manufactured gauze masks, with the Red Cross Shop one of the places offering them for sale.

While most steadfastly followed guidelines because of the severity of the illness, others attempted to skirt legal shutdowns. The Motion Picture News reported on 37 film theaters around Pittsburgh violated the state order by opening a week early. Motion Picture News revealed on Nov. 16 that several places in Portland, Ore., were not obeying quarantine orders, with the city’s entertainment leaders demanding that stay at home orders be tightened on these businesses.

As Variety noted in November, “politics played a part in the opening” of quarantines and restrictions in many cities. After quarantines ended and establishments were fumigated and disinfected, people rushed back out into the public and large venues, removing masks and freely circulating. Just a few weeks later, new cases began skyrocketing across the country.

Rules were tightened and new quarantines were again put in place, this time requiring all large venues: theaters, schools, churches, dance halls, factories, to be shut down. The Nov. 27 Los Angeles Herald demanded stricter guidelines, including quarantining all victims until completely well, but also preventing others from visiting them until victims healed. Most important, they demanded a permanent prevention to end the disease, which would now be vaccines.

In-mid December, strict quarantines were loosened, but businesses could only slowly reopen to the public. Those cities that had enacted strict quarantines saw less cases than those who followed loose orders. Large businesses were required to reduce the number of people that could enter at one time, with some theatres skipping rows between patrons or only filling half the seats. More stringent cleaning rules applied and wearing masks was compulsory in many cities.

Film studios also endured more stringent guidelines in making movies. Marshall Neilan’s “The Unpardonable Sin” originally was allowed to allow only 10 people at a time in a scene for filming, but after much persuasion they could film their big concluding scene. This required a policeman from every precinct and 10 doctors and 25 nurses to keep people apart when not filming and to be prepared in case of contagion. Nurses sprayed disinfectants into the air while everyone wore masks.

By early 1919, many medical officials began suggesting that motion pictures provide visuals in either slides or films showing audiences how to prevent infection, disease, and remain sanitary. By making it entertaining as well as informative, people would be more likely to understand and follow guidelines for staying healthy. S. Dana Hubbard wrote in the March 1919 Reel and Slide that “…motion pictures have a profound influence upon both mental and moral outlooks of many millions of people,” a subtle influence “subconsciously exercised.” Audiences could “…learn while you play.”

The article explained how lantern slides providing information on how to stay healthy and wear masks influenced people in following the guidelines. Humorous cartoons and vaudeville acts were now considered the best ways to reach audiences, providing an easy and fun way to digest information.

New cases began slowing down early in 1919, but a third wave returned later in the year. Most experts estimate that over 50 million people all over the world lost their lives to influenza, with 675,000 people in the United States succumbing to the illness, 200,000 in October 1918. The hardest-hit demographic was considered unusual in that more people ages 20 to 40 lost their lives.

While we now have antibiotics and vaccines for many diseases, doctors are feverishly working on a new one for COVID-19. We have more resources, both medical and physical, than people did in 1918, along with more information, but many now are more ill-informed about the illness and its treatment even with more access to news through computers and smart technology. The world is undergoing virtually the same road map and guidebook as did the population in 1918 and 1919; only by safely following guidelines can we reach better outcomes more quickly than did the United States back then. As many historians often say, “Without learning history one is apt to repeat it.”

1 Response to Mary Mallory / Hollywood Heights: Deja Vu All Over Again With COVID-19