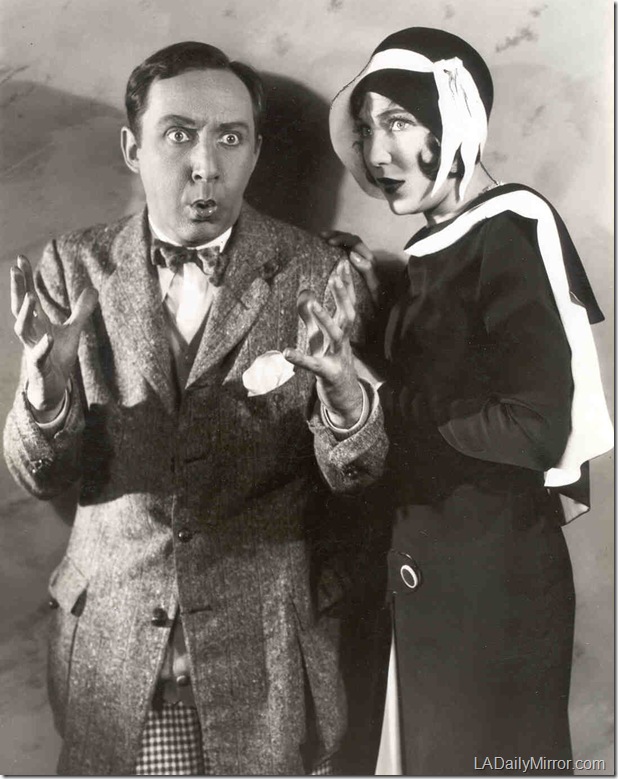 When 1930s Hollywood needed a seemingly organized and efficient bank or hotel manager who quickly became nervous and rattled, who better to turn to than the scene-stealing, ever lovable Franklin Pangborn? Busy and in demand from the beginning of his film career, he spent several years mostly starring in one- and two-reel comedies for the likes of Mack Sennett, Educational, Pathe, and Mermaid, along with occasional feature roles, until settling in as Hollywood’s favorite nervous nelly in the mid-1930s. 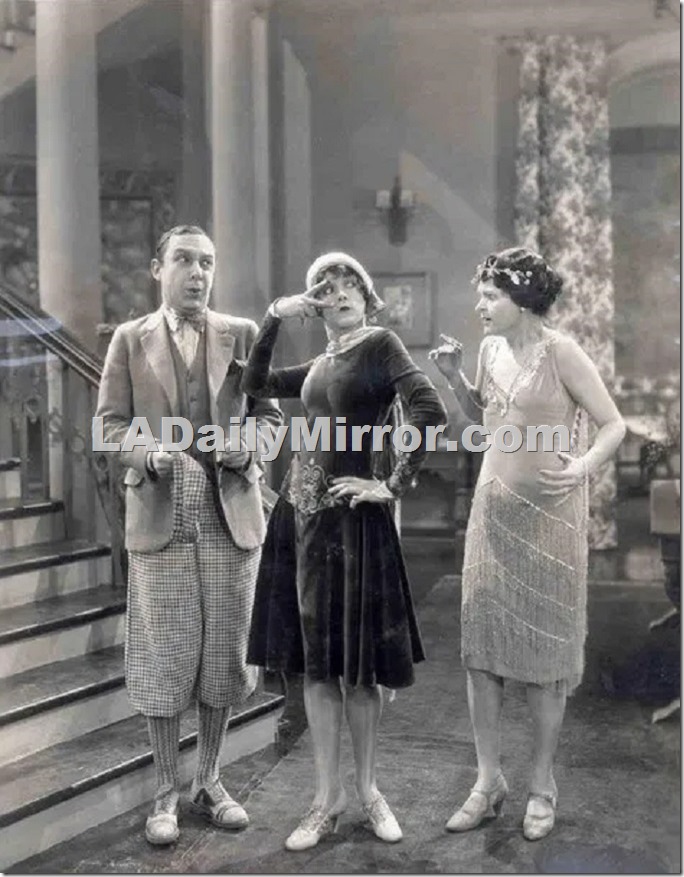 Our brilliant hero Pangborn was born and raised in Newark, New Jersey. Per the January 12, 1931, Film Daily, he “studied architecture as a boy but his bent for the stage, which he evidently inherited from his grandmother, a well-known actress, asserted itself before he graduated.” The March 14, 1926, Los Angeles Times called him “quiet-mannered, unassuming and self effacing,” and “a member of a distinguished New Jersey family and one of the thoroughbreds of the stage.”

In the March 4 edition, The Times stated that Pangborn took to acting at the age of 12, which didn’t make his father too pleased.  He told his son to take the first job he was offered. It so happened that a stock company in Newark needed an extra boy, and his father landed him the position, which merely required him to run across the stage and be caught and beaten by a policeman. He spoke with the actor playing the role and supposedly said, “When you run across the stage tonight and catch my son, drub him thoroughly.” Franklin came through like a pro, but his father yanked him from the production. He supposedly also played in a Newark production of “Hamlet.”

The article goes on to say that he gained his first real taste of the stage playing stock with Mildred Holland, and then productions of “Joseph and His Brethren” with Pauline Frederick and “War Brides” and “The Marionettes” with Alla Nazimova. Pangborn claimed this apprenticeship with the great Nazimova shaped his acting philosophy and technique. “Miss Nazimova, then at the height of her career, taught me the value of thinking and listening on the stage. It has been of inestimable worth to me. I can safely say I never go on for a performance without realizing more and more that an actor, in order to make the character he portrays live – seem real – must have the natural reactions of thinking and listening.” Pangborn worked two seasons with the actress, and later went on tour with the second company of “War Brides” as both manager and actor. He also toured in a Klaw and Erlanger revival of “Ben Hur,” playing Messala.

Pangborn enlisted during World War I, serving in the 312th Infantry, where he was wounded and gassed at the Argonne, per the Los Angeles Times, which states that for a while after, “it was thought he had ‘gone West.’ ” While he convalesced around Christmas 1918, he performed at the Topside Theater at Mars-Sur-Allier, helping build the theater and stage shows, but suffered a major relapse. Pangborn recuperated for almost two years until he could completely regain his voice and strength, and then came to Los Angeles in 1920 at the behest of Willamene Wilkes.

The actor threw  himself into performing, quickly becoming one of the Majestic Theatre’s top players, along with other actors like Edward Everett Horton, Holbrook Blinn, Leo Carrillo, and Marjorie Rambeau, playing everything from melodrama to farce. While working with the company, he met and quickly befriended the talented and beautiful Sara Sothern. The January 9, 1923, Los Angeles Times stated that the two had been engaged for months, but the actor told the paper he wasn’t sure when they would be married. Their romance blossomed because of mutual tastes, careers, and being ardent Christian Scientists.  At the time of the newspaper announcement, Pangborn remained in Los Angeles while Sothern performed in “The Fool” for the Selwyns in New York, soon to go to Chicago for a long run. Nothing came of this purported romance.

In late December, 1922, reports claimed that Pangborn would marry Miss Marjorie Cornell, the nurse who cared for him during World War I, “whom he met in San Francisco during a recent engagement.” Pangborn “admitted a warm  friendship for Miss Cornell, but nothing more.” The performer popped up in the newspaper as the boyfriend or fiance of a few women through 1928. The Los Angeles Times called him a boyfriend of “Stella” the film gossip columnist in 1928, and later that year, stated he was “supposedly engaged to Mrs. Jeanette Reid in December 1928.” No woman seemed to entice him to settle down however.

In the mid-1920s, Pangborn returned to the New York stage, where he played for 26 weeks with Francine Larrimore in “The Parasites,” before returning to the L.A. stage. “Pangy (as the Times called him)” jumped right back in to the theatre world, performing with composer/singer Jack Norworth in “Honeymoon House” in 1925, followed by the title role in “The Ideal Husband,” a mentally deficient young man in “John Ferguson,” and as Androcles in “Androcles and the Lion.” He was considered the highlight of  “Weak Sisters” as a boob reformer in 1926, which also featured Trixie Friganza. The newspaper stated, “He is an actor whose command of art is constantly growing and whose devotion to the spoken stage is deep, vigilant and sincere.”

Film studio officials saw him in the play and signed him for “Exit Smiling” starring Beatrice Lillie, before he appeared opposite Louise Fazenda in “Finger Prints” and some shorts. He soon signed with Metropolitan Studios. Pangborn rejoiced at performing in films. “I never knew what is was to really live until I entered motion pictures. On the stage I played every night and rehearsed during the day. When I left the theater there would always be a new role to study. Now when I leave the studio in the afternoon I have time for my friends, and the things I always wanted to do and never could find time for.”

Pangborn’s flare for comedy caught the attention of critics early on. Film Daily’s October 30, 1927, review for “The Girl in the Pullman” remarked that “Franklin Pangborn scores in his individual style.” A few months later, Pangborn signed with Cecil B. DeMille to star in “My Friend From India,” and signed a long-term contract with the over the top director, before leaving to go freelance in  May 1928.

The actor, along with Pauline Frederick, Bert Lytell, Lois  Wilson, Holmes Herbert, and others appeared in the sound Vitaphone “special” “On Trial,” released in September 1928. He then returned to a production of “Weak Sisters” at the Vine Street Theater in February 1929, into which he invested some of  his own money. The Los Angeles Times noted that he “has made quite a name for himself in the ‘silly sap’ sort of a role…” and went on to state that he was a bachelor with the stage his first love. The paper also claimed, “He’s in love. Of course, that’s happened before, but this, he avers, is the real thing. No, she’s not in the profession. He wouldn’t divulge her name at this stage for the world. But presently – if ‘Weak Sisters’ goes over big celebrations will be in order.”

Pangborn performed in a wide variety of short comedy films over the next few years for companies like Sennett, Educational, Pathe, Universal, and Mermaid, with an occasional feature performance. The Times claimed that a comic sequence in “The Lady of the Pavements” was written exclusively for him. He quickly became a Hollywood comic favorite. By 1936, the Times estimated his salary at $700 a week, and Pangborn admitted to making 26 pictures in 48 weeks, “tripling” in “Bluebeard’s Eighth Wife,” “Mad About Music,” and “Doctor Rhythm.” Soon actors and filmmakers like W.C. Fields, Frank Capra, and Preston Sturges featured him prominently in their films.

By the 1950s, Pangborn sold his house above the Sunset Strip and moved to Laguna Beach. On July 20, 1958, Pangborn died at St. John’s Hospital, one day after undergoing surgery, his second operation in months.