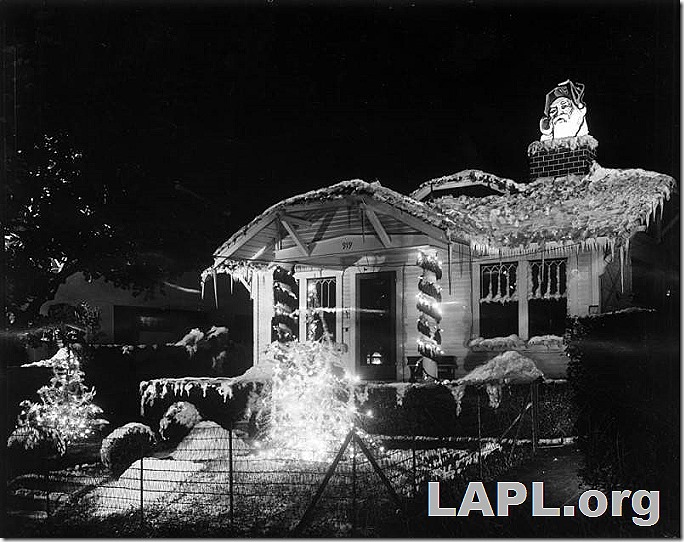 The Christmas House in Boyle Heights, courtesy of the Los Angeles Public Library.

Long before the inauguration of Instagram and trying to win social media by posting the most elaborate or flashy photo, George G. Skinner designed a homespun holiday light installation in the late 1930s meant as a simple opportunity to enjoy happy times and pleasures with friends and family. A popular holiday destination in Los Angeles similar to Christmas Tree Lane in Altadena, the Christmas House at 919 S. Mathews St. perhaps inspired later fancy holiday light displays throughout Southern California.

Born in Canada in 1912, George Skinner found himself in Los Angeles when his father Albert abandoned the family and took his son with him to sunny Southern California in 1920. The teenager developed a strong bond with his father, enjoying camping and beach trips. Though he yearned for his family, he remained with his dad, who told George that the warm weather better suited his health.

Jean Portland, left, and Windy Gilmore, in bathing suit, play in “snow” after a fire damaged the Christmas House in 1938, courtesy of the Los Angeles Public Library.

George thrived. In 1934 he was about to graduate from business school and hoped to propose to his girlfriend. While swimming laps at the Los Angeles City College pool May 22, 1934, George suddenly lost feeling in his arms and legs. Two strong athletes rescued him from the pool as he sank toward the bottom.

Rushed to Los Angeles County General Hospital, Skinner would spend two years encased in a huge, casket-like 650-pound iron lung to recover from polio.  Friends and neighbors visited often, showering him with cookies, candy, letters, cards and books. Skinner vowed to one day repay these people for their kind deeds.

Inspired by President Franklin D. Roosevelt, who also had polio, Skinner devoted himself to getting better. In one of his fireside chats, Roosevelt mentioned hydrotherapy and the healing waters of Warm Springs, Georgia. George yearned to try it, but Los Angeles County Hospital only offered hydrotherapy in its pool freely to those under 21. George received the treatment after writing a letter to First Lady Eleanor Roosevelt with the help of a nurse, as long as he could pay whenever he could.

In May 1936, Skinner finally went home to the tiny white bungalow with its white picket fence and small porch, wearing a body brace on his upper body and steel braces on both legs, using canes to aid his mobility. Tool and die maker father Albert struggled to support his son, but found enough money to construct a simple backyard gym to help him gain strength.

The Christmas House grew out of George’s dreams during his two year stay at the hospital, when he imagined Christmas in Canada with his far away mother, who taught him everything about the true holiday spirit. Good at design and construction, Skinner hoped to entertain and enthrall children, and thank his neighbors for their generous and kind support of him. He sincerely aspired to grace others with a little bit of sunshine just as he had been blessed. Working on his proposed design kept his mind occupied, a chance to escape from Depression blues.

That first year, 1936, George creatively devised a glittering light display through simple but smart ways. Per his daughter’s book, “The Christmas House,” George figured out that mirrors would increase the twinkly light display, freezing steam would make icicles to hang from the rooftop, painting cereal flakes white could replicate snow, and playing 78s of Christmas carols on the family record player would provide a little musical ambiance which people could sing along with.

George’s giving attitude and boundless energy inspired businesses and even movie studios to lend costumes or props or even make a small donation. Snow shipped in from Utah was dumped on the front lawn and when it melted, ingenious George dressed up his cereal flakes with white spray paint to serve as snow. Father Albert constructed a Santa figure for the roof and even dressed up as Santa to surprise guests, aided by a wishing well equipped with recording equipment and microphone.

Members of the Women’s American Legion Sunrise Post 370 pulled together his designs and watered the 12 eight-foot tall live trees inside as well as making hot chocolate to share with the many visitors.

The first time Albert flipped the switch turning on the lights, the fuses blew from overload. George realized they were drawing twice the electricity provided by the power company. Telephoning the Los Angeles Department of Water and Power, George mentioned that a reporter from the Herald-Express was coming to cover the Christmas House opening. The supervisor offered to loan him an emergency generator.

Radio stations and newspapers like the Los Angeles Times ran stories about the enthusiastic young man and his sweet cause, inspiring bumper to bumper traffic from admiring gawkers. The December 21, 1936, Los Angeles Times reported on Skinner’s display, noting that two elaborately lighted and decorated Christmas trees stood on the front lawn. The Times stated, “The snow effect on the roof is made of cotton batting; the icicles are covered strips of rubber and the flake snow in the yard is the chemical kind used by motion picture studios.” The stories drew tens of thousands of marveling Angelenos, creating what might be the first “Happiest place on earth.”

In 1937, papers announced that 265 carolers would serenade guests and serve homemade pastries with milk and hot apple cider. Eight life-size reindeer towing Santa’s sleigh graced the roof and even more decorations and costumes were loaned by businesses and studios. The Santa Rosa Republican on December 25, 1937 ran a photo feature, noting that decorations included 150 pounds of artificial snow, 304 feet of tinsel, 250 pounds of cotton, and more than 350 electric lights adding sparkly charm to the house. Papers in 1938 estimated that over 80,000 children toured the exhibit.

George spent the year of 1938 getting ready for the next big show, focusing on a Snow White theme to coincide with the Walt Disney Company’s animated feature released that year. Decorations included a wishing well, cascading waterfall, sparkling Christmas lights, and replicas of Snow White’s cottage, all complementing the 30 Douglas firs trucked from Tahoe inside the house. Skinner’s passion and enthusiasm continued to inspire business owners to donate goods and services, with even the Los Angeles Department of Power and Light paying the family’s light bill.

On December 8, a fire causing $10,000 worth of damage swept through the bungalow, resulting from faulty wiring. The interior was badly damaged, as well as half of the display. Heartbreakingly, the family lacked insurance. The December 15 Los Angeles Times reported the 16 person crew, 12 women and four men, began reconstructing the site after spending six months building props and six weeks getting everything ready. The cleaned up site, with damaged areas hidden under fake snow and tinsel, opened to the public on December 19, with papers later estimating that over 100,000 visited Christmas House that year. 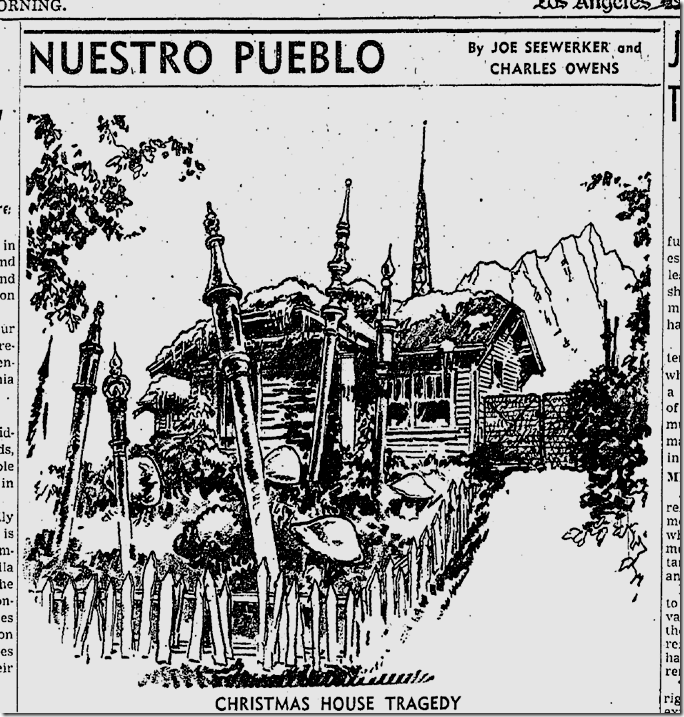 On May 17, 1939, Joe Seewerker and Charles Owens wrote and illustrated a column about the Christmas House and its demise for the Times, but stating that a stray cigarette caused the fire. They reported that as the family worked in the backyard, just hours from opening, a man tired of waiting stepped over the ropes preventing entry and ushered his wife and daughter into the home. When he carelessly threw away a cigarette, it landed on one of the 30 live trees inside the home, setting it ablaze.

George married Pearl Majoros in 1942, moving out of the Mathews Street home, which was eventually demolished. The Skinners moved to Hollywood by the late 1940s, with George working as a sound engineer and later designer at movie studios. After the birth of his daughters, Skinner and his wife even devised a shimmering display for their Curson Avenue home.

Other areas of Southern California began displaying elaborate Christmas lights, from the Griffith Park Light Display to the boat parade at Naples to neighborhoods like Upper Hastings Ranch in Pasadena and Candy Cane Lane in the San Fernando Valley. Soon these decorations became a way to bedazzle crowds and outdo neighbors rather than a sincere effort to enjoy the holiday spirit.

Daughter Georja collected the stories on her father’s Christmas House for her 2005 book, hoping to inspire readers with her father’s indomitable spirit. His work pulling together the holiday house healed his life emotionally and spiritually. In the concluding paragraph of her book, Skinner states, ”My hope is that the story of the Christmas House might help others find a way to hold on to and strive for whatever they believe in, no matter how impossible their goals might seem.” Focus on possibilities, not insurmountable obstacles. Following George Skinner’s maxim, “Dream big. Otherwise, why bother?”